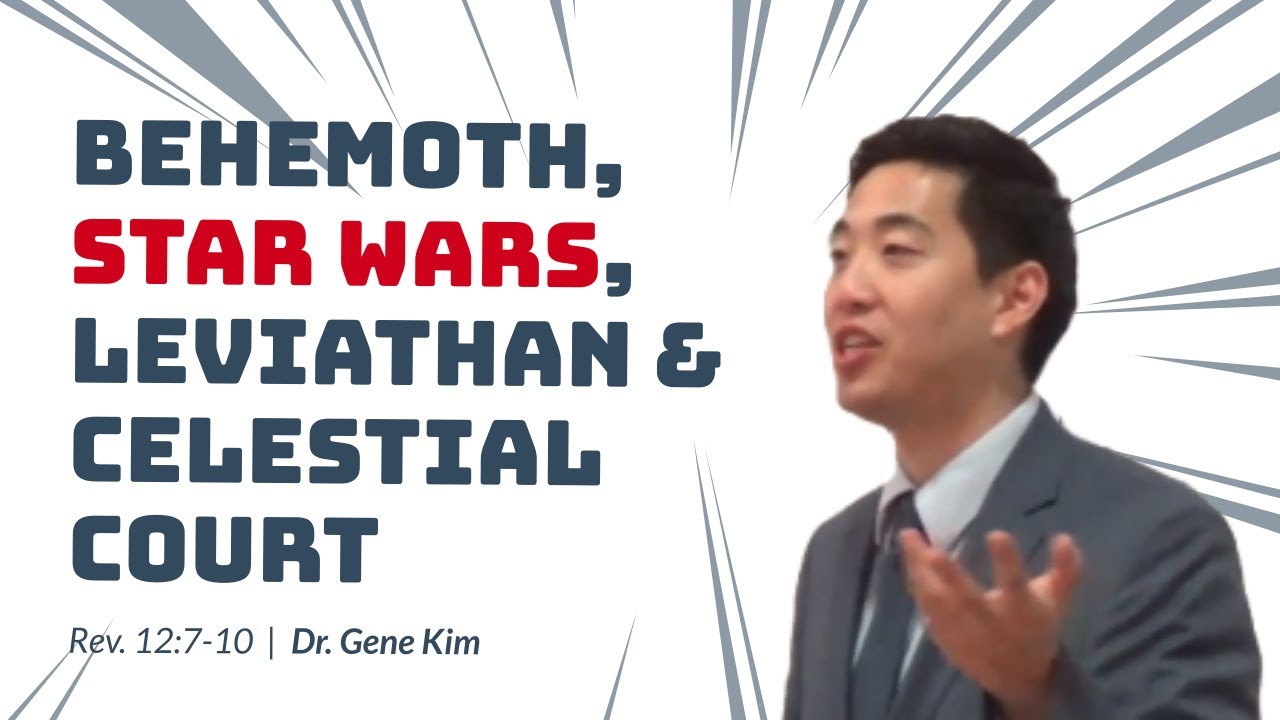 Let’s go back to Revelation 12, let’s look at star wars here. Remember, Paradise Lost, Milton’s classic book, these people get the wrong idea where there was war in heaven, Satan and a third of the angels lost and they fell on the earth during the Genesis account. That’s incorrect, this happens in the future.

These angels are fighting each other with Michael leading one army, the dragon leads the other army.

Revelation 12:8: “And prevailed not; neither was their place found any more in heaven.”

Satan lost the battle. This is where Michael finally gets involved where he is actually able to conquer Satan. Why? Because God’s the one that gives him the power but before then, Michael didn’t dare.

“neither was their place found any more in heaven.”

Satan and his beings lost their place where the stars are located.

That’s why it makes sense that God had to put the firmament over there before and that’s where he put the stars in the firmament. Also, the Bible shows that when He created that firmament, He didn’t call it good. Why is that?

Not only that, He divided the light from the darkness, that’s where all the darkness went. This makes a lot more sense when you believe in the Genesis gap account and dispensationalism as you take a literal verse-by-verse interpretation of the book of Revelation.

Revelation 12:9: “And the great dragon was cast out, that old serpent, called the Devil, and Satan, which deceiveth the whole world: he was cast out into the earth, and his angels were cast out with him.”

“And the great dragon was cast out,”

Satan got cast out of there.

“that old serpent, called the Devil, and Satan,”

He’s called the serpent, so we know in Genesis 3 that the serpent refers to Satan.

“which deceiveth the whole world:”

He deceives everybody in the world, he’s a great deceiver.

“he was cast out into the earth,”

He was cast from second heaven down to earth. That’s obviously not at the heaven where God’s throne is at. Why? Because sin is not allowed into the third heaven and God has to separate sinful stuff from heaven. Not only that, Revelation 12 told you it’s where the stars are located, that’s the part of heaven Satan is at.

There’s no doubt from this teaching that Satan and his minions are over here at this location where the Bible calls the firmament or the second heaven.

“and his angels were cast out with him.”

His fallen angels also fall with him as well.

That’s why these little green men from Mars are going to land on earth because their places are found no more up there. Where the mythologies of Greek pagan gods use these terms like Jupiter and Venus, and then you look at the book of Acts, these gods that came down like men and they mentioned Mercurius and Jupiter, what is all that? That’s referring to these devils. It’s going to refer to these fallen angels over there.

Can you picture that? At the tribulation, all of a sudden, myriads of UFOs start falling from the sky, and Satan just lets out a huge dragon that pops out of nowhere and lands on the ground. This tribulation timeline is going to be something.

Let’s cover the name of this dragon. Some people make the mistake concerning about the identity of leviathan, they’ll call it a dinosaur but that’s not really true.

Revelation 12:9 says “he great dragon was cast out, that old serpent, called the Devil, and Satan,“ so there is no doubt, the serpent, the dragon is referring to Satan.

Isaiah 27:1: “In that day the LORD with his sore and great and strong sword shall punish leviathan the piercing serpent, even leviathan that crooked serpent; and he shall slay the dragon that is in the sea.”

The leviathan is called “the piercing serpent” and “that crooked serpent”. That isn’t an innocent creature, it’s a crooked creature. It matches up with Revelation 12: serpent.

“the dragon” See that? That ain’t no innocent creature.
So the leviathan at Isaiah 27 is Satan. But God’s punishing this creature with the sword.

Behemoth, how do we know that this is Satan?

“He is the chief of the ways of God:” Sounds like Lucifer at Isaiah 14 and Ezekiel 28 but keep reading.
“he that made him” God made Satan, He made Lucifer perfect originally before he fell into sin. But what did the verse says?
“can make his sword to approach unto him” Remember Isaiah 27? God will punish leviathan with His sword.

So there’s no doubt this behemoth is not some kind of dinosaur and leviathan is not some long-necked dinosaur, it’s referring to Satan. Scripture with scripture shows clarity.

Revelation 12:10: “And I heard a loud voice saying in heaven, Now is come salvation, and strength, and the kingdom of our God, and the power of his Christ: for the accuser of our brethren is cast down, which accused them before our God day and night.”

“And I heard a loud voice saying in heaven,”

John hears a loud voice that’s about to say something up in heaven.

‘Now we receive the power, the strength.’

“and the kingdom of our God,”

God’s kingdom can be established now.

“and the power of his Christ:”

That’s Jesus Christ. His power can reign. Why?

“for the accuser of our brethren is cast down,”

It already defined for you why the kingdom now can start. It’s being established because it’s when he fell out of the second heaven where the stars are located, so God can take it over now.

“which accused them before our God day and night.”

That’s a sermon that a lot of preachers use.

Didn’t you know that there is a courtroom up in heaven? Look at Hebrews 9:27 “And as it is appointed unto men once to die, but after this the judgment:” You have an appointment, just like in court. The judgment happens in court.

Satan accuses God’s people, the brethren. You got to realize that Satan has not stopped accusing you before God. Even though we’re eternally secured, but Satan will do whatever he can to keep accusing you so that you can get some kind of condemnation from God. That’s why you got take spiritual warfare seriously. People are not aware of spiritual warfare. Demons are going around 24/7 tirelessly just to ruin your life and you cannot survive without a day of prayer, watchfulness, abstaining from sin and putting on the whole armor of God. Demonic warfare is real, demonic attacks are real, demon possession is real. If you don’t think this is real, you have not been paying attention to Satan’s kingdom physically on this earth either. He has taken over the world, you can see everything going on throughout out world and you got to realize that this is Satan’s activity.

Day and night he’s the accuser. He’s the guy that accuses you at the courtroom before God tries to find an accusation with you.  But bless God, you’ve got an advocate in court. You have an advocate, you have a defender, you have someone that can make you innocent before the judge.

1 John 2:1 :“My little children, these things write I unto you, that ye sin not. And if any man sin, we have an advocate with the Father, Jesus Christ the righteous:”

Satan is accusing you day and night (whenever we sin) but bless God, we have Jesus Christ as our advocate.

See, there is a courtroom going on.

While this being is accusing you, what do we have? We got the cross of the Lord Jesus Christ. Because of that cross at Calvary where He shed His precious blood, He becomes our advocate.

If you look at 1 John 1, the advocacy is not just on salvation. It is also presently when you still live in sin and the context of 1 John 1 is in context with fellowship in your Christian walk. If you sin and you confess, He is faithful and just, just like a judge has to be just when passing down judgment. If we confess our sins, He is faithful and just to forgive our sins and to cleanse us all from unrighteousness. That blood of Jesus Christ not only provided you salvation, but it also secures your fellowship and standing with him. That’s why Satan is working tirelessly 24/7 because if he can’t get your soul in hell, he’s going to get whatever is leftover in your life.

Revelation 12:11: “And they overcame him by the blood of the Lamb, and by the word of their testimony; and they loved not their lives unto the death.”

“And they overcame him by the blood of the Lamb, and by the word of their testimony;”

Notice that this group of people in the tribulation was able to conquer the dragon by the blood of the Lamb and by the word of their testimony.

Remember, you can’t take one application when you read the book of Revelation. Some hyper dispensationalists might interpret Revelation 12:10 and rob you of your blessing. Christian can claim the promise of Revelation 12:10. Why? Because there are Christian epistles that show that Jesus Christ is our mediator and our intercessor. That’s found in Pauline’s epistles. You can find that in Romans 8, 1 John 1, 2.

They have tribulation application but the context is Christians in fellowship with God. That’s something hyper dispensationalists hate and they keep trying to make that tribulation. Hyper dispensationalists go as far as to say Christians don’t have to confess their sins, so if you mess up in your sin, you don’t have to confess your sin and repent.

It’s a daily thing, we have to confess and repent. If you don’t do that, you’re going to have overriding guilt. You need to repent of that, you need to confess it, you obviously can’t carry it around with you. Joseph Prince also teaches this heresy where he says that because Jesus Christ has already paid for your sins, you don’t have to confess it. Confession is not just found at salvation, it’s also fellowship. The apostle John said that many times in 1 John 1, that the context was not salvation but your walk and your fellowship.