Cheating or Abusive Spouse? Can I Divorce and Remarry? 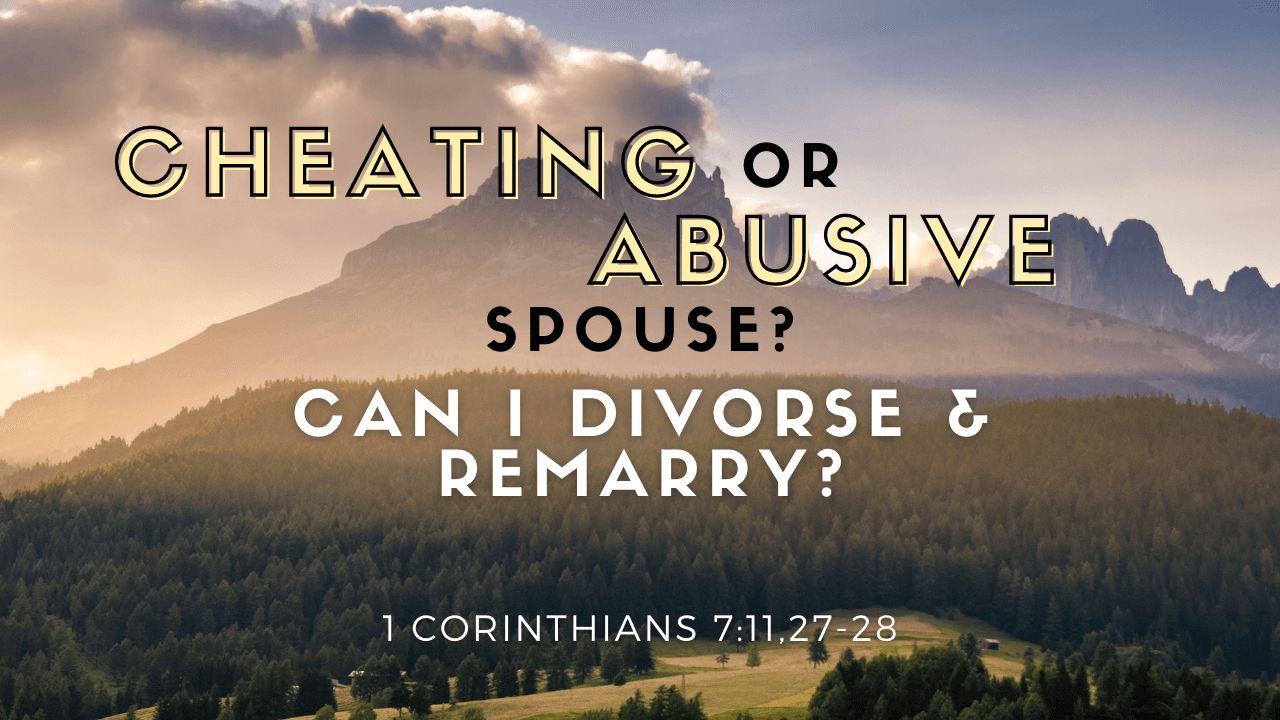 What do you do concerning divorce due to infidelity?

What does the Bible say about dealing with abusive and marriage partners?

There are three grounds for divorce, and God can understand that because, in His words, God has justified that it is reasonable to leave or divorce a spouse due to these three reasons.

Some peachers may be very one-note and considers divorce at any time or given reason to be a sin. Their impudence may cause more harm to families than the other way around.

Romans 7:2: “For the woman which hath an husband is bound by the law to her husband so long as he liveth; but if the husband be dead, she is loosed from the law of her husband.”

The very first ground of divorce is death. If a spouse dies, one can divorce or even remarry.

Matthew 19:9: “And I say unto you, Whosoever shall put away his wife, except it be for fornication, and shall marry another, committeth adultery: and whoso marrieth her which is put away doth commit adultery.”

Notice right that Jesus Himself says it is a sin if a man divorces his wife, but except fornication. The statement made by Jesus is literal and applies even to our timeline this day.

Desertion and separation are another ground for divorce.

Even though the Bible says we should get divorced easily, but to retain our marriage as much as we can. Usually, divorce should be the last resort after all other means and efforts have been put into saving the marriage.

1 Corinthians 7:10,15: “And unto the married I command, yet not I, but the Lord, Let not the wife depart from her husband: But if the unbelieving depart, let him depart. A brother or a sister is not under bondage in such cases : but God hath called us to peace.”

In verse 10, it says the spouse cannot leave the other, but verse 15 says that if the other half wants to depart, let him/her be so that we can have peace. God commands us to rejoice and have peace. As much as God sees marriage as a blessing and that no man should be alone, if our spouse happens to be abusive and puts our peace and safety into jeopardy, God allows us to depart from the relationship. This is known as desertion.

It clearly says that each spouse’s body also belongs to the other, and it should be treated with good care and benevolence. This is the rule and regulation of a marriage that God demanded. If things don’t go that way, trust the Bible that God does not condemn one for leaving the spouse. Verse 11 clearly says that.

1 Corinthians 7:10-11 “And unto the married I command, yet not I, but the Lord, Let not the wife depart from her husband: But and if she depart, let her remain unmarried, or be reconciled to her husband: and let not the husband put away his wife.”

Verse 15 reiterates it is acceptable to depart from an abusive marriage. God wants marriage to be peaceful, not full of fear, resentment, and aggression.

That said, the Bible shows us that God sees marriages as Holy gifts, and that should be enjoyed and preserved if necessary. God does not ask for divorce or desertion from the very beginning, but instead, He wants every couple in marriage to fulfill their obligation and duty.

In verse 3, ‘Let the husband render unto the wife due benevolence: and likewise also the wife unto the husband’ is the testimony of the husband and the wife doing their obligation, and it should be stellar. We should not take some of these verses in 1 Corinthians 7 for granted, and jump into divorce too quickly as it is not the will of God either.

The Bible asks for reconciliation in marriage before jumping into other means or solutions.

Again, let’s look at verse 11, ‘But and if she depart, let her remain unmarried, or be reconciled to her husband: and let not the husband put away his wife.’ If one party wants to divorce, then the other should always seek reconciliation as that’s what the Bible teaches, which should be accompanied with prayers and trusting God that He will fix the relationship.

This means surrendering our relationship to God. If all these three above have been attempted, the marriage usually will turn for the better.

Even Paul acknowledges that marriage can be saved if couples walk right with God.

Bear in mind that divorce should be condemned if a couple already thinks about or files a divorce without attempting any three ways.

There is also this one verse that God gives explicitly to women/wives as a blessing.

1 Peter 3:1-2: “Likewise, ye wives, be in subjection to your own husbands; that, if any obey not the word, they also may without the word be won by the conversation of the wives; While they behold your chaste conversation coupled with fear.”

It proves that a stellar testimony of a wife can even put the fear of God on the husband. We understand that sometimes a situation can be more pressuring for the women, as women have to submit to their husbands, but we see how God can reward the women with such spiritual fruits.

Nonetheless, keep in mind that it is one thing to submit to a husband as part of fulfilling a wife’s duty. Abuse and aggression are not allowed, and should be off-limits.

1 Corinthians 7:11,27-28: “But and if she depart, let her remain unmarried, or be reconciled to her husband: and let not the husband put away his wife. Art thou bound unto a wife? seek not to be loosed. Art thou loosed from a wife? seek not a wife. But and if thou marry, thou hast not sinned; and if a virgin marry, she hath not sinned. Nevertheless such shall have trouble in the flesh: but I spare you.”

Remarriage is not a sin, just that God says it is better not to remarry because undoubtedly a remarriage may bring problems from the previous divorce-kids, trauma, etc.