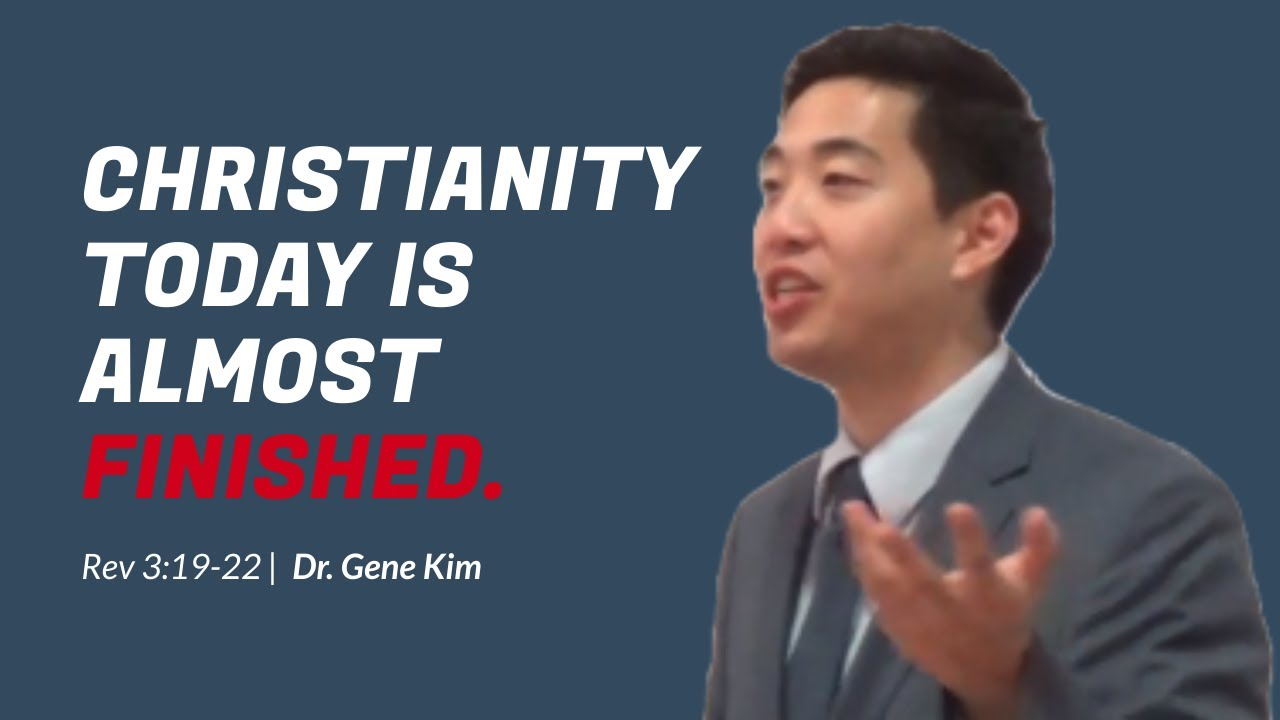 It’s been quite a journey as we covered the book of Revelation. We see the entire church age era here. We have seen seven different churches that the Lord has explained in His passages: Smyrna, Pergamus, Thyatira, Sardis, Philadelphia, Laodicea.

Laodicea is the day and age where the Catholic church made an amazing comeback and revived its system. During the day of Philadelphia, that’s when the elites and the big conspiracies that you hear about today, of the system, the bankers, etc, it was born in Philadelphia. Why? Because they had to do it underground. Public preachers and churches were dominating the world, they didn’t have the guts to come out that time.

Because of its underground system from the elites and conspiracies, it started to affect the spiritual state where they first attacked your Bible, by introducing evolution. Laodicea successfully kicked in. That’s why you got the big powers today who control our world and the church has fallen into apostasy and the world is becoming more socialist and liberal-minded, more about civil rights. Laodicea means civil rights.

What’s different about Laodicea as compared to the different eras? Sardis was definitely dead, Philadelphia was hot, Thyatira and Pergamus was a great day of darkness and apostasy but what made Laodicea very different is that it is both hot and cold, which God hates the most. Why? Because when you’re watching some preacher online or you attend some church and it’s getting hot and you’re like, ‘Man, this is the right guy’ and then you hear something where they slip up and then they became cold. You get all confused and you don’t know if this preacher is right or wrong. How many of you have been searching for Bible-believing truth and you ended up like that? That’s why God hates this day and age because people can’t make up their minds. They can’t see if they’re dead or they’re in the right.

If you’re like hot, hot, hot, then God is like ‘Okay, I am going to use you’ but then you become cold in some things, then God’s like ‘I can’t use you then’. Then God has to sit back and still see, and it’s still the process of falling between hot and cold. God hates that the most, He would prefer you to be dead and cold so that He can move on to the next person.

Revelation 3:19 “As many as I love, I rebuke and chasten: be zealous therefore, and repent.”

God loves these people, the Laodiceans.

“I rebuke and chasten:”

That’s why God has to rebuke and chasten them. Chasten is an old English word where it means discipline. It can even mean scourging sometimes, believe it or not, in Hebrews 12, so it’s like beating you. God has to beat the senses into you.

“be zealous therefore, and repent.”

That’s why you should be zealous of your apostate state. For example, you were jumping between the hot and cold state from January to May, then all of a sudden at summer camp you became zealous and repented. That’s what God wants. There’s got to be some point in your life that you became zealous and go ‘I want to quit this, I want to get right with God. I got all pumped up after the singing, preaching, and fellowship, so I’m going to get right with God’. God wants that.

Revelation 3:20 “Behold, I stand at the door, and knock: if any man hear my voice, and open the door, I will come in to him, and will sup with him, and he with me.”

Behold means pay attention. There are a lot of people who just go ‘Uh huh, uh huh, Amen’ but they’re not really paying attention. That’s why instead of just preaching, a lot of times God will say BEHOLD and then speak, because He wants your attention.

Laodicea is a closed door. Jesus Christ right here is knocking, He’s trying to go in but He can’t. Yet here you are being hot and cold, just going ‘Uh huh’.

Look at verse 8, Philadelphia’s door was open and because of that, Jesus can move inside and started a sweeping revival.

It doesn’t matter how much you love Jesus or how much service you’re doing for him, if there’s that cold that’s pulling it back, that’s enough to make it a closed door.

There may be pastors who have even more sincere intentions than the pastor, perhaps even love Jesus more than he does. But here’s the problem, it doesn’t matter how you’re looking at their good points, what about their apostasy, their wrong doctrine, their wrong practices? That’s enough to make it a closed-door and God can’t bless it. Besides, if you’re truly sincere in your intention, you’re not going to have anything cold in your life.

“if any man hear my voice,”

They’re not even hearing.

No matter how many chapters of Bible they’ve read or they prayed or how many sermons they preached or even claimed that they saw Jesus in a vision or dreamt about Jesus who spoke to them. No, God did not speak anything to you. You can’t even hear His voice. Why? Because of that cold, you’re not listening to Him.

‘How do you know if I’m not listening to Him? I sure listen to Him’.
Okay, signs and wonders are not biblical, they are the devil.
‘Oh, how dare you say that?’
See that, you’re not listening. The problem people have is the defense mechanism where they rationalize things and they want to go in their own world and stay on their side of the door. They refuse to be open-minded, open-hearted where God is speaking.

You know that signs and wonders are wrong. Charismatic doctrine is wrong. Those modern versions are wrong. Worldly music is wrong. You’re not letting Him in. You have your own Jesus and your own Christianity. Jesus is outside saying ‘Knock knock, let Me in’.

“and open the door,”

Jesus Christ can finally come inside you.

“and will sup with him, and he with me.”

There’s a thing where you spiritually feast with Jesus Christ. Bible reading and prayer are where you take in spiritual food.

The majority of churches in the Silicon Valley area and the San Francisco Bay area are not spiritually growing even though they claim they love Jesus. Why? Because there’s a cold draught that’s pulling them back. There’s something that they’re closing the door on. Jesus is saying, ‘Let me in so that you can finally eat with me, growing in grace in grace with me’.

Jesus Christ opens the door for you Laodiceans to get in here but you refuse to let Jesus Christ inside your life and your house, isn’t that something? That God would let us wicked sinners inside His house but we don’t let Him inside our house.

Revelation 3:21 “To him that overcometh will I grant to sit with me in my throne, even as I also overcame, and am set down with my Father in his throne.”

“To him that overcometh”

That’s a tribulation phrase again. So if you overcome, if you conquer, you live your life well

“will I grant to sit with me in my throne,”

Jesus Christ will grant you access to sit with Him on His throne. So you’re going to share His rulership with Him. You get a chance to sit on His throne and rule.

“even as I also overcame, and am set down with my Father in his throne.”

That means Jesus Christ overcame. He conquered His life, that’s why He’s able to sit on the throne to rule.

You hear the phrase ‘I let Jesus inside my heart’, that phrase is actually taken from Revelation 3:20. That’s the famous verse Christians use when we do soul-winning, ‘Did you invite Jesus into your life?’. That’s okay to do from a spiritual context. Pastor sees this as a more different spiritual context where you’re refusing to let Jesus Christ in your life where you can grow in grace. It doesn’t matter right here, we could see it as salvation or we could see it as spiritual growth for a Christian if they refuse to let Jesus Christ inside them.

A spiritual context for verses 20 through 21 would be that in verse 21 you overcome because of the faith in Jesus Christ, 1 John 5. Because of that, that’s why we say at verse 20 ‘Did you invite Jesus Christ inside your heart?’ meaning “Did you receive Him by faith, trust in Him by faith?”

So we can see both spiritual and doctrinal application right here.

Revelation 3:22 “He that hath an ear, let him hear what the Spirit saith unto the churches.”

Do you have ears? Then please please please, for crying out loud, let him hear what the Spirit says to the churches.

Let’s look at this from the spiritual context, ever since the time of the apostles, the Holy Spirit was sent down. He’s been speaking to all the churches, the entire church age here and it’s so amazing how much the church did not pay attention to what the Holy Spirit is speaking. We’ve seen that in all seven church eras and it seems like churches don’t learn their lesson. As one big preacher said, ‘What men learn from history is that men never learn from history.’ The problem with us, wicked fleshly carnal Christians, is that we just don’t seem to learn our lessons right here. Now we’ve hit that stage where ‘Okay, I’ve learned my lesson but I don’t know…’. It’s the day and age of both hot and cold.