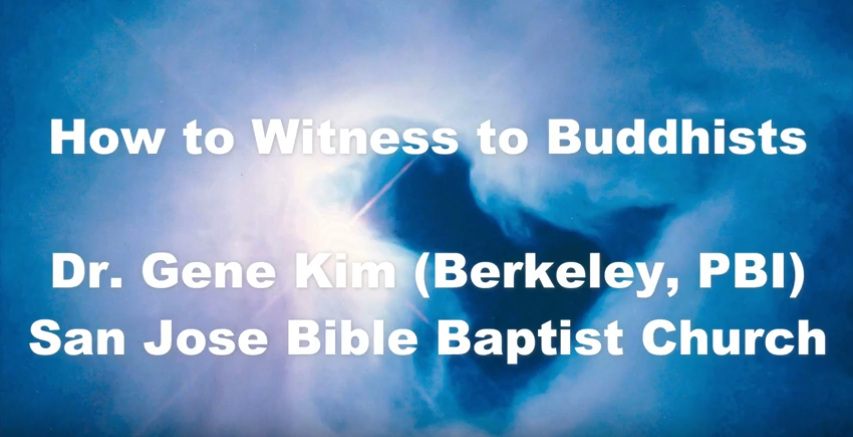 What Buddhists believe in

Buddhists believe in reincarnation, which is, “If you do good, then you will have a good next life.” They believe that we are born from the universe, and that enlightenment is a state you achieve when you do enough good to be freed from the cycle of rebirth.

What’s important for all eastern religions is to ask them what they really believe. Since there are so many different versions, one never knows what it is that they really believe. Can animals reincarnate to the humans, then to powerful humans, and finally back to the universe? Most of the time, they will say that nobody knows.

Buddhists also believe in karma, where the salvation plan is to do good deeds to go to heaven. It’s impossible to eliminate all bad works since humans sin plentifully. No matter how long the vow of silence goes, a person will never be able to cleanse himself.

Stop and think about this question: Is it easier to believe in a powerful God who can give you salvation or that you can save yourself?

Romans 3:23: “All have sinned and come short of the glory of God. To declare, I say, at this time his righteousness: that he might be just, and the justifier of him which believeth in Jesus.”

Our works are a constant imperfection. Monks etc., reach salvation through their works instead of perfect salvation.
Don’t you want enlightenment?

Sometimes, “suffering” is needed to make a person grow. For example, marriage and couples fight, but that’s needed so they can bond and go through life together.

What do human beings do during suffering?

They don’t detach. They seek comfort and solace. Christians see suffering as a way of God’s tests and making us better. This makes more sense; that there’s a God you can rely on rather than figure out your cause of suffering.

1 Peter 4:19: “Wherefore let them that suffer according to the will of God commit the keeping of their souls to him in well doing, as unto a faithful Creator.”

This is the Christian answer. God knows all things. It could be His will to let us suffer, but He has a better plan. God is perfect. It makes more sense to rely on a God who is all-powerful and works out your future rather than separating yourself from the “root” of what you think is wrong.

Taoists/Buddhists also believe in the concept of Yin and Yang, where they believe that the universe is made out of two opposite elements. Male and female. Darkness and light. Negative and positive things in life. Active and passive people. So, the biggest flaw is that for humanity to exist, there must also exist murders, robbery, etc.

Question: Wouldn’t good and evil have to coexist to make a balance? So then murder is justified. If they don’t coexist, then there’s no good and bad Karma either. There is a big logical flaw in their religion.

Veneration of the dead

Another faulty teaching is veneration, which is the worship of dead ancestors.

Deuteronomy 18:10-12: “There shall not be found among you any one that maketh his son or his daughter to pass through the fire, or that useth divination, or an observer of times, or an enchanter, or a witch. Or a charmer, or a consulter with familiar spirits, or a wizard, or a necromancer. For all that do these things are an abomination unto the Lord: and because of these abominations the Lord thy God doth drive them out from before thee.”

In the above verses, the Bible says that it’s not good to communicate with dead people. For example, after Saul, a king of Israel, enquired a familiar spirit, God killed him.

1 Chronicles 10:13: “So Saul died for his transgression which he committed against the Lord, even against the word of the Lord, which he kept not, and also for asking counsel of one that had a familiar spirit, to enquire of it.”

Who is the authority in Buddhism?

Christians have the Bible’s authority as the preserved word of God, who teaches Buddhists that Buddha is a fallible man and that the Bible is infallible. There is mathematical, scientific, and historical evidence of the Bible.

There’s a cultural aspect to why Buddhists will not listen to you, no matter how logical or scriptural you are. So hit the heart of the matter because otherwise, you will argue back and forth.

Note to Christians: Do not contradict the Bible or compromise with the Bible by adapting to their culture for the sake of bringing them to Christ.

Acts 19:26: “And when he had found him, he brought him unto Antioch. And it came to pass, that a whole year they assembled themselves with the church, and taught much people. And the disciples were called Christians first in Antioch.”

Buddhists may think that Christianity is western religion, but the first converts were easterners. Jesus, a Jew, was also an easterner. The first Christians are in Antioch (Turkey), which is also in the East.

Do you fear your friends/family more than God?

Luke 12:5: “But I will forewarn you whom ye shall fear: Fear him, which after he hath killed hath power to cast into hell; yea, I say unto you, Fear him.”

Is it going to be harder to fear your friends and family or God who can eternally condemn you? That is what the Bible asks. God has the power to put you to hell. The founder of Buddhism himself, Buddha, also abandoned his family to achieve enlightenment. He didn’t care what his culture thought of him.

Let’s hope that your eyes will be opened to see the truth.