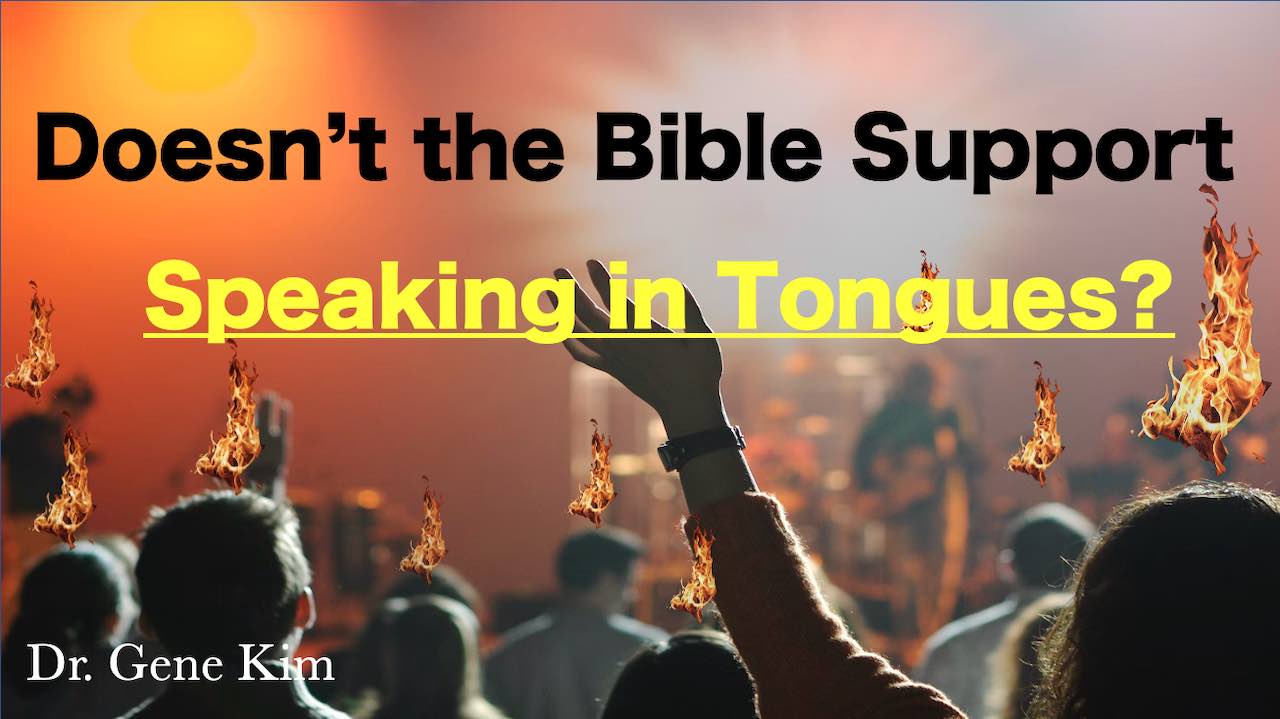 Romans 8:26:  “Likewise the Spirit also helpeth our infirmities: for we know not what we should pray for as we ought: but the Spirit itself maketh intercession for us with groanings which cannot be uttered.”

“Likewise the Spirit also helpeth our infirmities: for we know not what we should pray for as we ought:”

We do not know how to pray.

“but the Spirit itself maketh intercession for us”

So God’s Holy Spirit in us intercedes.

“with groanings which cannot be uttered.”

By making noises that cannot be spoken.

Charismatics use this verse as proof to argue that a person can speak in tongues in a mysterious, spiritual language that no one understands, hence the gibberish. However, what they fail to do when using this verse is reading it as it says, which completely dismantles their false interpretation. The most concrete proof that this is a verse against speaking in tongues is found in the last part of the verse which says “groanings (not tongues) which cannot be uttered.” There is no uttering of words, so it is impossible to speak in a mysterious, spiritual language. Aside from not speaking, it is not even words that the Spirit says, but rather groans. There is a difference between speaking gibberish and groaning.

Reading it precisely as it says, let’s now revisit Romans 8:26.

We have sicknesses so the Spirit helps us.

“for we know not what we should pray for as we ought:”

We do not know what we should pray about. In other words, we are unable to pray using the correct words, not that we don’t know what to pray about.

“but the Spirit itself maketh intercession for us”

Therefore, the Spirit intercedes for us.

“with groanings which cannot be uttered.”

The Spirit is the one groaning, not us.

Verse 27 makes it clearer that the groanings are from the Spirit and that we are not involved in any way.

And he that searcheth the hearts knoweth what is the mind of the Spirit, because he maketh intercession for the saints according to the will of God.

Here we see that the Holy Spirit intercedes the prayer to be according to God’s will.

To sum it all up, there are times when we do not know how we should pray, that is, what specific words we should use for our requests unto God. However, our promise from the Holy Spirit is that He understands exactly what we want to convey and, in turn, intercedes on our behalf via groanings, turning our prayer into the correct form for God. This is a beautiful promise that God gives us, but the Charismatic interpretation of speaking gibberish ruins it.

Charismatics also use the following verse to claim that a person can speak in an unknown tongue (gibberish to us) when speaking in tongues. Simply put, they speak in an unknown language (not a foreign language), and not even they can understand it (or anyone for that matter).

1 Corinthians 14:14: “For if I pray in an unknown tongue, my spirit prayeth, but my understanding is unfruitful.”

“For if I pray in an unknown tongue,”

I pray in an unknown language.

The Holy Spirit in me prays.

“but my understanding is unfruitful.”

I do not even understand what I am saying.

This is their prooftext for speaking something which they do not understand, yet believe that it is something the Holy Spirit guides. This interpretation is misguided. First of all, we have to identify what is meant by an unknown tongue. Simply put, it is a tongue or language not recognizable by the hearer. We know this because of the context in verse 9.

“So likewise ye, except ye utter by the tongue words easy to be understood,”

We see here that it has to be a recognizable tongue, not gibberish.

“how shall it be known what is spoken?”

How are people going to understand you?

“for ye shall speak into the air.”

This is where the unknown tongue comes into play. It is a language that people do not understand. Therefore, you are speaking to the air (no one understands you).

Going back to the original verse, we read it as it says.

“but my understanding is unfruitful.”

Now that we know what an unknown tongue means, it is easier to interpret this verse. This person’s understanding of a tongue or the ability to understand/speak a language does nothing for the hearer if the hearer does not understand them. In other words, what good is communicating in a foreign language if others don’t understand you? Your understanding (of a foreign language) then becomes unfruitful to the hearers. This is what the verse is trying to convey, and we know this by using the context of verse 9.

This verse is also used to prove that speaking in tongues is inaudible gibberish.

1 Corinthians 13:1: “Though I speak with the tongues of men and of angels, and have not charity, I am become as sounding brass, or a tinkling cymbal.”

“Though I speak with the tongues of men and of angels“

Notice here that the tongue of angels is a language not known by us humans but rather a mysterious language exclusive to those in heaven. This is how the Charismatics defend the gibberish that comes out in the form of speaking in tongues. However, this mysterious language that they claim to speak is not of God, but rather a sign of demon possession. But giving the benefit of the doubt, let us focus on defining ‘tongues of angels’. To do this, comparing Scripture with Scripture is needed.

When you compare Scripture with Scripture, you learn that the tongue of angels is not inaudible, so a person can understand them (unlike the gibberish of the Charismatics). The only thing 1 Corinthians 13:1 does is distinguish between the tongue of men and the tongue of angels. This distinction is true because if you look at instances throughout the Bible, the way angels speak is different from how we humans speak.

Something else you might want to consider when identifying a possible tongue for the tongue of angels is that it could be Hebrew. The reason behind this is because God, being the God of Hebrews, spoke to the prophets in Hebrew as it was His nation’s language. It is also a possibility, given that the official language spoken when God reigns on earth will be Hebrew.

Revelation 14:6-7: “And I saw another angel fly in the midst of heaven, having the everlasting gospel to preach unto them that dwell on the earth, and to every nation, and kindred, and tongue, and people, Saying with a loud voice, Fear God, and give glory to him; for the hour of his judgment is come: and worship him that made heaven, and earth, and the sea, and the fountains of waters.”

“And I saw another angel fly in the midst of heaven, having the everlasting gospel to preach unto them that dwell on the earth, and to every nation, and kindred, and tongue, and people,”

Notice that this angel speaks in one language to people of many languages.

“Saying with a loud voice, Fear God, and give glory to him; for the hour of his judgment is come: and worship him that made heaven, and earth, and the sea, and the fountains of waters.”

This angel was speaking an audible language so people could understand him.

Revelation 16:5: “And I heard the angel of the waters say, Thou art righteous, O Lord, which art, and wast, and shalt be, because thou hast judged thus.”

Another example of heavenly language or the tongue of the angels is presented here, with the context being an angel speaking directly to God. Notice that this, too is an audible language and not inaudible gibberish.

Revelation 19:17: “And I saw an angel standing in the sun; and he cried with a loud voice, saying to all the fowls that fly in the midst of heaven, Come and gather yourselves together unto the supper of the great God;”

This was an audible language to the animals spoken by an angel.

Not only that, you will notice many times throughout the Bible that when an angel spoke in his tongue, it was often audible Jewish. Examples of this are found in Judges 6, Zachariah 1, Matthew 1, and Matthew 2.