How to Be A Pro in Christian Debates | Intermediate Discipleship #57 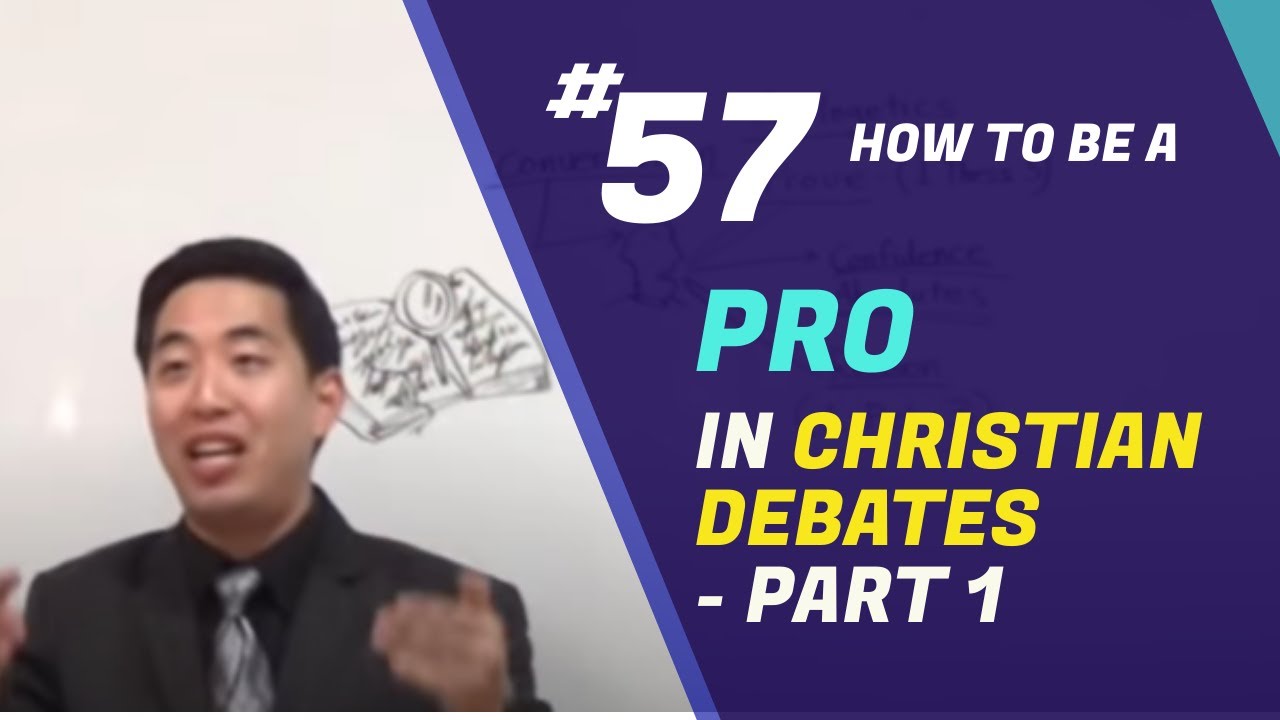 This discipleship will be a combination of soul winning and apologetics specifically aimed at using arguments to prove and defend a Christian’s faith.

1 Thessalonians 5:21: “Prove all things; hold fast that which is good.”

Christians are commanded through scripture to prove all things and to hold fast that which is good. In a Christian walk, one must prove what they believe. Some brag about higher education in science and the advancement of technology while corrupting the younger generation’s minds. They give the impression that Bible-believing Christianity is all about myths, fairy tales, fantasy, and filled with narrow-minded bias. Their statements are partially true because Jesus says, “strait is the gate and narrow is the way.” Bible believing Christians may be biased in the sense that no matter what historians and scientists may bring out as “proofs” against Christianity, we’re going to believe the word of God. We are not against science, history, proofs, or evidence. Mainstream scientists are corrupted by the devil and do not know true science. We want to make the skeptical world understand that our beliefs are provable and reasonable.

A Christian’s language and communication, as they witness to people about the Lord Jesus Christ, is provable. Christian faith should not be like sifting sand, unconfident, and doubtful. As a Christian witnesses the gospel of the Lord Jesus, their language must be confident and absolute. Their communication has to be reasonable and provable.

1 Peter 3:15-16: “But sanctify the Lord God in your hearts: and be ready always to give an answer to every man that asketh you a reason of the hope that is in you with meekness and fear: Having a good conscience; that, whereas they speak evil of you, as of evildoers, they may be ashamed that falsely accuse your good conversation in Christ.”

The reason we’re all about reasonable is it’s to put forth a good testimony. There’s a stark difference between telling people that they’re going to burn in hell for their sins and the Bible is true. Some street preachers and some narrow-minded ignorant Christians don’t know how to defend their faith. In the lost person’s eyes, they do see you as narrow-minded and biased. You’re supposed to witness to them, not to yourself.

Tip: Preachers, when you preach, you’re actually talking about yourself. Preachers know their tendencies, weaknesses, and fleshy nature. They come across hard in our preaching to convict them. Preachers have to come down to their level to “shed forth a good testimony.” Their preaching has to sound reasonable to them.

If you preach good or preach nicely, they’ll speak evil of you. Nevertheless, you want them to speak evil of you when your conversation is flawless and filled with reason; not when they can easily point out error.

Here are some examples and arguments that a Christian can use to feel confident in their faith.

I’m going to give you tools you can use so you can feel absolutely confident in what you argue.

1. Know your Bible! Your Bible is the final authority. The reason you’re afraid is because you don’t know much of your Bible. STUDY your Bible for yourself.

2. Go to church, Bible study, take notes, pay attention, watch videos, and listen to audios. Don’t skip a church service or Bible study because maybe there’s a particular teaching that you might learn something valuable. It will help you grow and be more confident.

3. Bookmark ALL of these videos. Make a list of recordings, whether video or audio, especially your homework assignments during discipleship.

4. During discipleship training, take notes and do your homework assignments.

What helped the pastor a lot after he became a pastor, he paid more attention and listened closely to people like Pastor Schreib. The things that they taught were so important because he’s then able to use them for other people.

If your best friend believed in a heresy and you want to get your best friend saved, your attitude and heart change. These lessons will help you a lot because you are going to deal with people like this one day.

There is a difference between those who watch Pastor Gene’s videos and others who watch other Bible-believing pastors and his videos. That’s the benefit of studying different people. He encourages Bible-believers to read their Bibles and watch intermediate discipleship videos.

When you’re dealing with religions who use the Bible, these are the kind of people you can be confident in your conversation on using the Bible. You might want to go back and watch intermediate discipleship teaching because you might be dealing with a loved one or a struggling friend. It will give you arguments to use that will help.

There are those who don’t believe in the Bible, so using your Bible may not work with them. You need to solidify the evidence in the Bible and your faith. In your beginner’s discipleship, Pastor gave you a lot of evidence of the Bible, historical, scientific, and mathematical. The problem when you use this evidence, Muslims will do the same thing with the Quran about mathematical pieces of evidence. Mormons will use the prophesies of Joseph Smith, which is in the Book of Mormon.

1 Corinthians 15:17, 19: “And if Christ be not raised, your faith is vain; ye are yet in your sins. If in this life only we have hope in Christ, we are of all men most miserable.”

Paul used the resurrection on the Greek philosophers, some laughed him off, but others wanted to hear him out.

When you use the Bible, Calvinist, Jehovah’s Witness, Mormons, they have to admit Jesus is God. (The evidence is undeniable in the scriptures that Jesus is God.)

When you argue with an atheist, “When you study the sciences of creation around you – it demands a creator.” You use language that is confident and absolute. You have to use language that’s strong, powerfully weighty, persuasive, factual, absolute, scientific, historical, etc. When talking to an atheist, it has to demand an intelligent designer, evolution is impossible. Two types of people are open to God, but they don’t know which God.

What Happened to the Body?

With each argument, remember that Roman soldiers guarded the tomb at all time. Jesus was inside a suffocating tomb for three days and three nights with myrrh and other spices (some poisonous) used to prepare his body for burial. Christians were not popular and were risking their lives just by following or believing in Jesus. They could be tortured, arrested, have property taken, or put to death. There was no benefit in proclaiming “they saw Jesus.” Believing a lie would mean their gospel was a lie. These are some of the arguments regarding Jesus’s resurrection.

What benefit would it be for them to say “body stolen” or “lie” or “trick”?

Challenge yourself, be skeptical, be critical against yourself. When we challenge ourselves, we can increase our faith. Challenge your faith so you can see greater evidence of his workings. When you do that, you’re excited and confident, and you’re ready to tackle a Muslim who will bring up the argument of the twin body theory. If Christianity is true, shouldn’t you believe what Jesus said, “where their worm dieth not, and the fire is not quenched”? “For God so loved the world that he gave his only begotten son.”

“The Bible is true and you should listen to my book as your final authority. All the founders, scientists, they’re all in their graves. None had divine power. “

All honest scientists will say “I can be wrong.” The workings of our universe are vast and unknown, despite how many experiments and evidence, they prove it can change. Carbon 14, however scientifically good it sounds, can throw off thousands of years of dating based on environmental changes. Covid-19 is an excellent example. Dr. Fauci said, “I’m unashamed to admit that I can be wrong because that’s the beauty of science.”

Jesus is irrefutable. He proved it with his resurrection. He took life from death. How do you know that Jesus said so?

Manuscript evidence shows that is undeniable. In textual criticism, schools that major in Bible manuscripts can’t deny that overwhelmingly 5000 Greek manuscripts support the wording in your King James Bible. The evidence is so overwhelming that it could reach 99%. One percent supported by ancient witnesses of the resurrection and ascension of the Lord Jesus Christ.

Please go to Final Fight Bible Radio. They are a 24/7 station with clean Bible-believing sermons, music, etc. Go to other Bible-believing channels, not your preferred channels because a lot of them preach heresy. Go to our resource link: www.realbiblebelievers.com. You’ll find Bible-believing websites you can listen to, and by listening to them, your Bible knowledge will increase. Other authors and resources: Nessel Allen, Jack Moorman, and also refer to defending the KJV playlist or articles about KJV only.