I’m Scared! Will I Miss the Rapture? 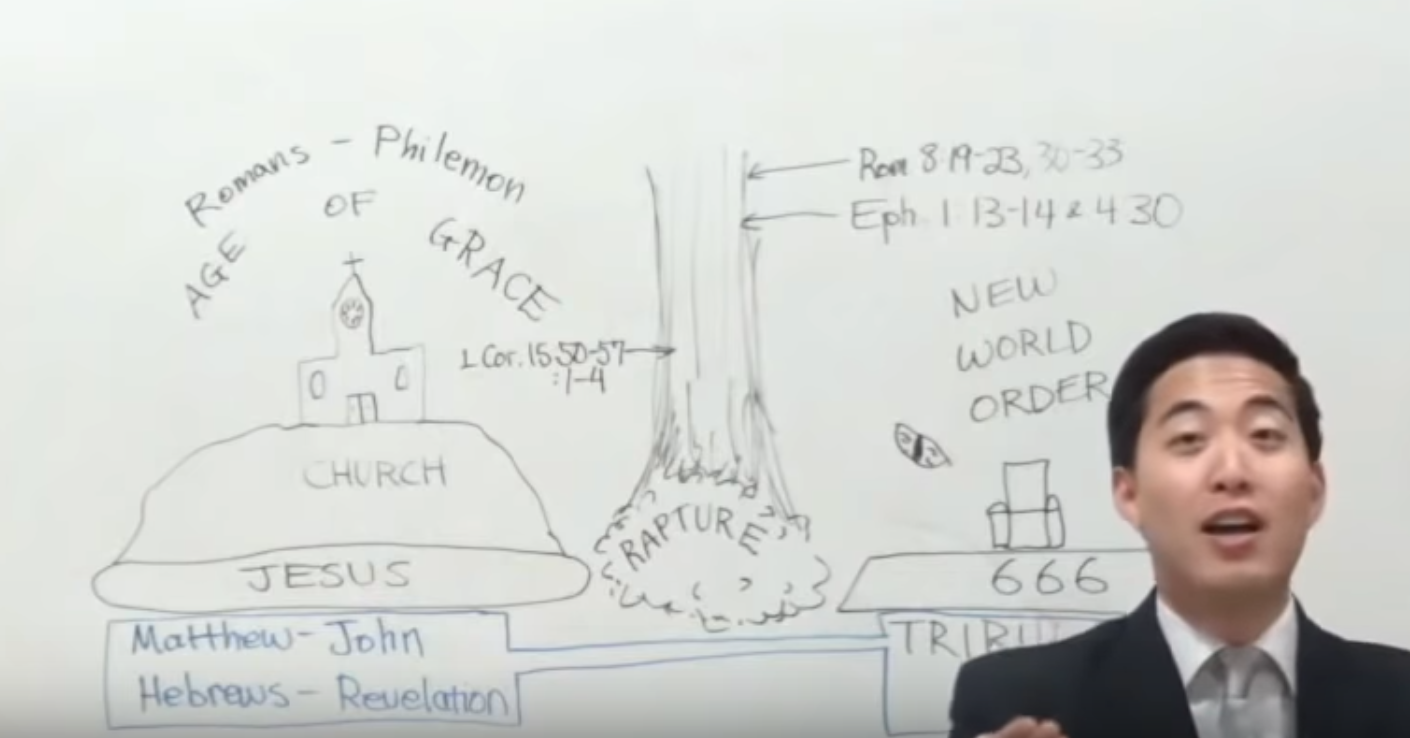 We believe in the doctrine of dispensationalism, or rightly dividing the Bible to the right groups of people and time periods. This is important because if we believe all verses apply to us, we may end up with major heresies and wrong doctrines.

We also believe that we, the church, will be raptured before the Tribulation.

Age of Grace vs. Great Tribulation

We are currently living in the Age of Grace. This is a separate time period from the Tribulation. Today, however, there are many people concerned that they are in danger of going through the Tribulation. During the Tribulation, the Man of Sin (otherwise known as the Antichrist) will sit on his throne and rule over the world under a 666 system. Congress recently passed a bill involving the coronavirus vaccine that was related to the number 666. This has caused some to worry that the coronavirus vaccine may be the Mark of the Beast. They are also concerned that the Antichrist will come down and rule over the world, including the church, during our current time period. Some people are even fearful that they may miss the rapture, causing them to have to resist the Mark of the Beast.

Can Christians Miss the Rapture?

Despite this, some Christians are still concerned about missing the rapture. However, we have verses that show that saved Christians who believe in Jesus Christ cannot miss the rapture. To qualify for the rapture, all you need to do is confess to the Lord Jesus Christ with a repenting and believing heart. You’ll receive salvation through faith, and you will then be raptured without having to go through the Tribulation.

What if we sin, mess up, or otherwise fail in our service to the Lord?

Do we still qualify to be raptured?

In a previous lesson (see the Chronology of the Apocalypse video on Youtube), we read that the church will be raptured before the Tribulation. We also learned that some verses (see Dispensation playlist on Youtube) commonly used to explain the rapture do not apply to the Christian church. These verses instead apply to an alternate time period.

Some verses are used by skeptics who believe in a mid-Trib rapture, post-Trib rapture, or a rapture requiring good works. But these verses all come from books Matthew through John and Hebrews through Revelation. However, these books do not apply to us Christians. Instead, they apply to the Jews in the Tribulation. In fact, Gentiles were not reached with the Gospel until later in the book of Acts. Jesus also did not yet die on the cross, thus giving Christians the ability to receive faith-based salvation.

The books Hebrews through Revelation mention the last days, otherwise known as the Tribulation. Even the title of Hebrews refers to the intended audience of the book: Jews. The Jews are also mentioned in Revelation 7. The apostles who wrote these books ministered exclusively to Jews. Apostle Paul even mentioned this in Galatians 2.

Verses that are used to prove the church missing the rapture, a works-based rapture, or having to stay through the Tribulation are found in Matthew through John and Hebrews through Revelation. By remembering that these verses apply to Jews only, we can be assured that we Christians will be raptured.

Biblical Evidence for the Rapture

The verses that prove that the Christian church will be raptured are found in the remaining New Testament books: Romans through Philemon. We can be sure of this because Apostle Paul, the author of these books, states his ministry is concerning the church. In fact, the introductory verses of these books begin with “to the church” of his particular audience, whether Rome, Corinth or Thessalonica. Paul speaks directly about the salvation of Christians in the book of Ephesians.

Ephesians 1: 13-14 “In whom ye also trusted, after that ye heard the word of truth, the gospel of your salvation: in whom also after that ye believed, ye were sealed with that holy Spirit of promise, Which is the earnest of our inheritance until the redemption of the purchased possession, unto the praise of his glory.”

Verse 13 states that once a Christian believes for their salvation, they are sealed. This sealing is done by the Holy Spirit, and it cannot be undone. Verse 14 mentions that the sealing is up to earnest of our inheritance, redemption of the possessions, and praise of his glory is the rapture. We can know that we will be sealed until the rapture. Paul continues to talk about Christians in the book of Romans.

Romans 8: 19-23 “For the earnest expectation of the creature waiteth for the manifestation of the sons of God. For the creature was made subject to vanity, not willingly, but by reason of him who hath subjected the same in hope, Because the creature itself also shall be delivered from the bondage of corruption into the glorious liberty of the children of God. For we know that the whole creation groaneth and travaileth in pain together until now. And not only they, but ourselves also, which have the firstfruits of the Spirit, even we ourselves groan within ourselves, waiting for the adoption, to wit, the redemption of our body.”

Verse 19 talks about how our earthly creature state is waiting to be transformed in Heaven. On earth, our creature state is subject to the bondage of sin and corruption. We will be liberated from this in Heaven. Verse 23 alludes to the fruits of the spirit that parallel with the holy spirit mentioned in Ephesians 1: 13-14. The redemption of our bodies in Heaven will be the redemption of a purchased possession, and this will happen after the rapture. Verses 20 and 21 can also reassure us that although our current bodies are subject to sin, we will be raptured regardless.

But what if Satan brings up our sins to the Lord? We can be reassured by verse 30 of Romans 8.

Romans 8: 30-34 “Moreover whom he did predestinate, them he also called: and whom he called, them he also justified: and whom he justified, them he also glorified. What shall we then say to these things? If God be for us, who can be against us? He that spared not his own Son, but delivered him up for us all, how shall he not with him also freely give us all things? Who shall lay any thing to the charge of God’s elect? It is God that justifieth. Who is he that condemneth? It is Christ that died, yea rather, that is risen again, who is even at the right hand of God, who also maketh intercession for us.”

This connects with Ephesians 1: 14 when it mentions the praise of his glory and in Romans 8: 21 when it details our raptured glorified state. If someone brings a charge against us and we know Romans 8: 31, we will know what to say in return. Verses 33-34 also prove that if our faith is on the basis of the death of Christ, we are then covered and thus justified. Therefore we can be assured that we will be raptured no matter what.

Ephesians 1: 13-14 says were sealed by the Holy Ghost until the rapture. But what if we sin? Our answer to this can be found later in Ephesians 4.

Ephesians 4: 30 “And grieve not the holy Spirit of God, whereby ye are sealed unto the day of redemption.”

This day of redemption is the rapture, and this means we’ll be sealed by the Holy Ghost until then no matter how many times we sin. If we believe in the Lord Jesus Christ for salvation, we can know that we will be raptured. Another scripture about this can be found in 1 Corinthians.

1 Corinthians 15: 50 “Now this I say, brethren, that flesh and blood cannot inherit the kingdom of God; neither doth corruption inherit incorruption.”

Verses 50-57 of 1 Corinthians 15 are known to be about the rapture. In verse 50, Paul is referring to his raptured brethren. The first four verses of 1 Corinthians 15 explain that they were raptured because of the salvation they received from Jesus Christ. So in order to be one of these brethren that are raptured, you must believe in Jesus Christ for salvation. It does not mention anything about works. Still, some Christians worry due to the virgins who missed out on the rapture because they didn’t keep the holy spirit burning. This passage is found in Matthew 25. But we must remember that these people are not rightly dividing the word, as the church is mentioned in only Romans through Philemon.

The second passage famous for talking about the rapture can be found in 1 Thessalonians 4, specifically in verses 15 through 17. However, verse 14 begins talking about what to do before the rapture.

1 Thessalonians 4: 14 “For if we believe that Jesus died and rose again, even so them also which sleep in Jesus will God bring with him.”

Verse 14 explains that God will bring up both the deceased and living people to Heaven. No works were mentioned nor required in this verse. It is instead due to our faith in the Lord Jesus Christ.

So if the coronavirus vaccine were to be released soon, we can know that it is not the true Mark of the Beast. However, the vaccine may be a precursor to this Mark. Yet we must remember not to be in fear because God is not the author of fear, but of power, love, and a sound mind.

1 John 3 also proves that Christians will be raptured regardless:

1 John 3: 2 “Beloved, now are we the sons of God, and it doth not yet appear what we shall be: but we know that, when he shall appear, we shall be like him; for we shall see him as he is.”

We can 100% know that because we are God’s sons, we will be raptured. For instance, if you let your father down in some way and he disowns you, are you not still father and son based on the seed? Even if our heavenly Father hated us, which is impossible, He cannot undo this bond. We can now be sure that we will be raptured if we are true Christians.

Many skeptics of the rapture use 2 Thessalonians 2: 4-12 as a proof text to show that Christians will go through the Tribulation. But if you look at the passage, the author mentions “they,” not “we.” We Christians are not mentioned until verse 13.

2 Thessalonians 2: 13-14 “But we are bound to give thanks alway to God for you, brethren beloved of the Lord, because God hath from the beginning chosen you to salvation through sanctification of the Spirit and belief of the truth: Whereunto he called you by our gospel, to the obtaining of the glory of our Lord Jesus Christ.”

If you are saved through sanctification of the spirit and belief of the truth by faith, we are raptured or called to glory in verse 14.

Colossians 3: 4 “When Christ, who is our life, shall appear, then shall ye also appear with him in glory.”

We Christians will be raptured and not go through the Tribulation based on our belief alone. Although some are still scared that they may lose their salvation, we can hold confidence in 2 Thessalonians 2: 13. It states that we were chosen by God which cannot be undone.

Click here to watch the video I’M SCARED! Will I Miss the Rapture? by Dr. Gene Kim: