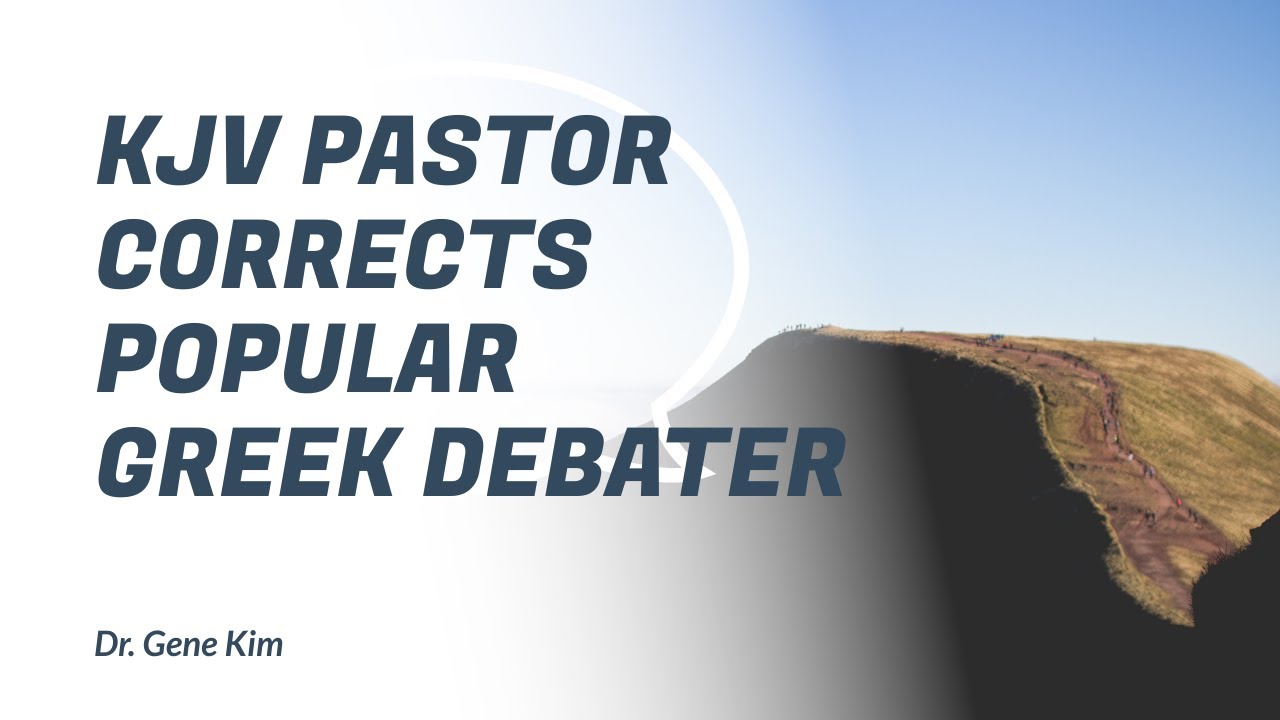 The Textus Receptus is the collection of Greek manuscripts from which the King James Bible came from. James White challenges the Textus Receptus. He particularly attacks the Book of Revelation, because the King James Bible has some supposedly “troubling” readings of the original Greek in the Book of Revelation. So, he wants us to defend these readings by use of Greek manuscripts available today.

The manuscripts from which the King James Bible was translated come from all over the world, including Syria and Antioch. We have to be careful to only look at Greek manuscripts as most of them came straight from Alexandria, where many of the church fathers have warned us that corruption and changing of the text arose in those times. God doesn’t only work through Greek and Hebrew. He can work through any language! That makes all of the other manuscripts that the King James Bible was translated from important as well. They should not be cast aside just because they are not Greek.

Let’s look at Scriptural evidence for this.

Acts 11:26: “And when he had found him, he brought him unto Antioch. And it came to pass, that a whole year they assembled themselves with the church, and taught much people. And the disciples were called Christians first in Antioch. And in these days came prophets from Jerusalem unto Antioch.”

We see here that many of the first churches were founded in ANTIOCH! The word of God was preached first in Antioch. The manuscripts of KJV came from Antioch. They were Syrian-speaking bodies of Christ, not necessarily Greek. God works through many languages. The manuscripts of these churches were likely in Syrian. That means we can trust these ancient, Syrian sources just as much if not more than the Greek manuscripts that came out of Alexandria, the hotbed of Gnosticism where the church fathers warned us changes in the Scriptures were occurring.

Look up all the verses in the Bible that speak to Alexandria. They are all negative! This is where so many heresies arose during those times!

Acts 18:24-26: “And a certain Jew named Apollos, born at Alexandria, an eloquent man, and mighty in the scriptures, came to Ephesus. This man was instructed in the way of the Lord; and being fervent in the spirit, he spake and taught diligently the things of the Lord, knowing only the baptism of John. And he began to speak boldly in the synagogue: whom when Aquila and Priscilla had heard, they took him unto them, and expounded unto him the way of God more perfectly”

This verse shows that the Alexandrian way was not correct. Here, we see Priscilla and Aquilla, who are laymen and students of Paul’s teachings. They took an Alexandrian scholar aside and corrected him on his doctrine.

Now, when Apollos comes from Alexandria, he is educated, eloquent, and passionate about God’s Word. He truly has good intentions and he desires to work alongside them in ministry eagerly. But his doctrine needed correcting! The Bible says that Priscilla and Aquilla needed to teach him the way of God more perfectly! This shows what kind of doctrine was being taught in Alexandria. It was not the way of Paul, who wrote most of our doctrine in the New Testament. It was not the way of the first Christian churches, which arose in Antioch.

So, based upon this knowledge, which manuscripts would you be more comfortable relying on? The manuscripts that taught the doctrine from Alexandria that needed to be corrected, or the doctrine of the churches in Antioch that were in line with what Paul was teaching, the author of much of the New Testament? We must be careful when we harp so much on the Greek manuscripts. There are others out there too that are important, even more, important than those.

Revelation 20:9: “And they went up on the breadth of the earth, and compassed the camp of the saints about, and the beloved city: and fire came down from God out of heaven, and devoured them.”

The phrase “fire came down from God out of heaven” is supported by most Greek manuscripts. The NIV here deletes God, even though the majority of Greek manuscripts support it. It shows that they aren’t even playing by their own rules but rather picking and choosing what they want the Word to say. There is a multitude of other verses that show the same hypocrisy from modern Bible translators.

Revelation 14:3: “and they sung as it were a new song before the throne, and before the four beasts, and the elders: and no man could learn that song but the hundredand forty and four thousand, which were redeemed from the earth.”

The NIV says that “they sing a new song.”

Revelation 20:9: “And they went up on the breadth of the earth, and compassed the camp of the saints about, and the beloved city: and fire came down from God out of heaven, and devoured them.“

Revelation 6:16-17: “And said to the mountains and rocks, Fall on us, and hide us from the face of him that sitteth on the throne, and from the wrath of the Lamb: For the great day of his wrath is come; and who shall be able to stand?”

This verse gives us a phenomenal example of the importance of contextual and internal evidence. With an example like this, we don’t even need to go to the original Greek manuscripts or any other for that matter. All we have to do is look at the verse itself!

In verse 16, this verse talks about the wrath of the Lamb, that is, Jesus Christ. Then, in verse 17, it says the day of his wrath. These verses make sense together. Everything flows like it should. But in modern Bibles, it says the day of their wrath. Now, put that together with verse 16. What sense does that make? Which verse do you think is the correct reading? Often, all you have to do is look at the contextual, internal evidence to determine what is going on in a particular verse.