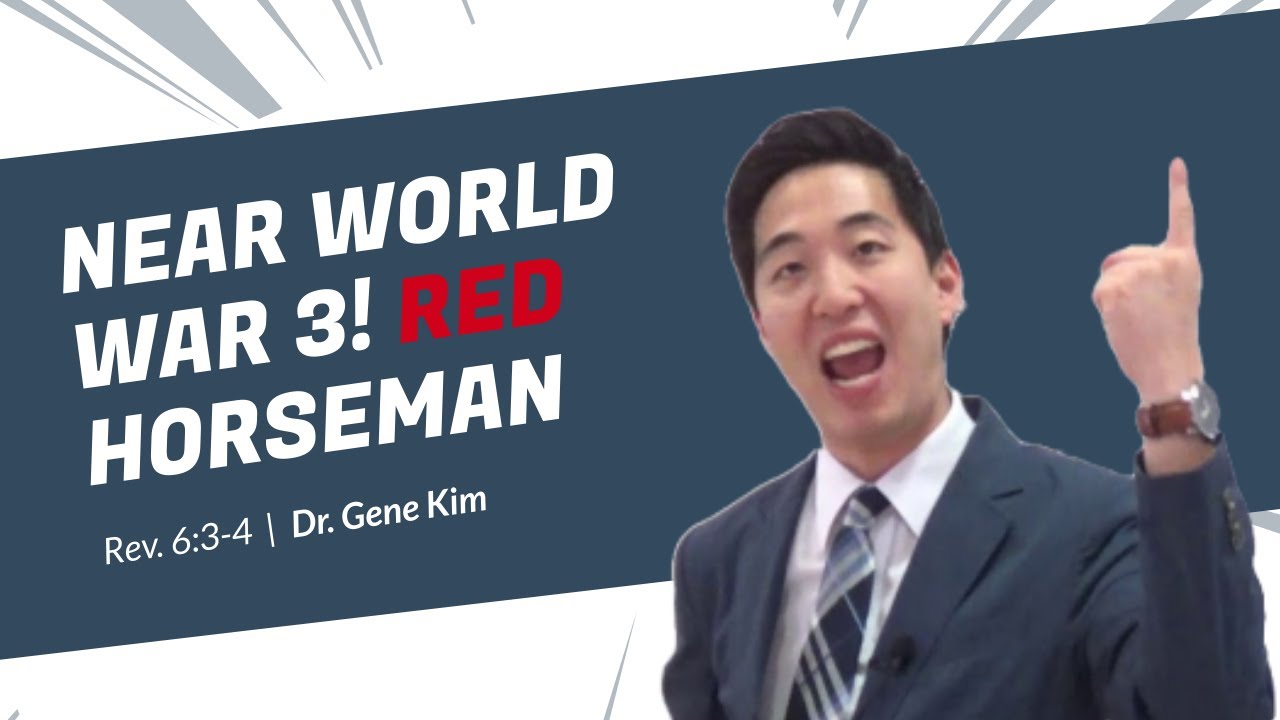 We saw the seven ages of the churches, now let’s go through the seven seals.

The first seal we saw, the first horseman, was the Antichrist.

The second seal will be war.

In Revelation 6:1, when the Antichrist comes, the Bible says he came forth conquering and to conquer, but compared with Daniel 11 as well as 1 Thessalonians 5, the verse says that he

So what that means is that when the Antichrist comes, he comes in its proclamation of peace. But when they say peace, the Bible says, be forewarned, destruction will come. What he’s doing is that he’s conquering through the so-called words of peace. So when they say peace, it’s not going to be like a peaceable timeline. There’s going to be war. The Bible warned that when he comes down with the words of peace, be careful, war will be coming. Remember, he’s conquering and to conquer. That means certain nations are going to disagree with the Antichrist UN. Because of that, these other nations (the rogue nations) are going to conflict against the United Nations. Notice the color of this second horse.

Revelation 6:3: “And when he had opened the second seal, I heard the second beast say, Come and see.”

When they opened up the second seal, the second cherubim is going to introduce the second horseman.

Remember that there are four cherubims up in heaven, and it’s interesting that they coincide with the four horsemen of Revelation. It’s as if Satan wants to compete with God, he has his riders, and God has His riders, the cherubims.

Revelation 6:4: “And there went out another horse that was red: and power was given to him that sat thereon to take peace from the earth, and that they should kill one another: and there was given unto him a great sword.”

“And there went out another horse that was red:”

Notice the color of the horse here: red. Now, think about nations that currently conflict with the United Nations today. Also, think about the nations whose favorite color is red. When one thinks about nations that will resist the Antichrist United Nations, and their color is red, it points easily to communism. The Bible mentioned a lot of prophecies concerning Russia. Not only that, Revelation 16 also talks about the kings of the east coming out, and it says that the Antichrist has a difficult time with those nations as well.

Here are the clues so far:

They inevitably point towards communist countries.

Even though Russia claims that communism is dead and gone, today’s president and the things going on in Russia, the roots are still there. Throughout the past years, they don’t like the United Nations, that’s why there’s conflict, and there’s going to be a red war. Also, think about the number of deaths that totaled more than Nazi Germany. Communist countries numbered more on the tolls of millions of deaths? This makes more sense that these communist countries would perfectly fit the bill of the red war. That means that so many more millions are going to die.

If this is scaring you, then get saved in Jesus Christ now! Get raptured, and don’t go through this timeline. But it’s coming no matter how hard the United Nations try, the Antichrist is going to try to proclaim peace, but the rogue nations are going to resist, so he has to conquer to attain the peace, he has to make them yield, and they will result to war.

“and power was given to him that sat thereon to take peace from the earth,”

Who’s coming with the words of peace? The Antichrist. So there’s going to be a group out there who resists this peace. Looking at current events, and also history, the best candidate here is the communists. Red China, North Korea with their flag, Russia before the Soviet Union fell, their symbol is with their red flags. This is communism here.

“and that they should kill one another: and there was given unto him a great sword.”

They’re going to be in conflict and kill one another. Interestingly, the Soviet Union communism flag has the blade as part of their symbol.

Matthew 24:3: “And as he sat upon the mount of Olives, the disciples came unto him privately, saying, Tell us, when shall these things be? and what shall be the sign of thy coming, and of the end of the world?”

Jesus is going to explain how the tribulation starts, look at how these horsemen come out.

Matthew 24:4: “And Jesus answered and said unto them, Take heed that no man deceive you.”

Whose job is to deceive the world? The Antichrist.

Matthew 24:5: “For many shall come in my name, saying, I am Christ; and shall deceive many.”

Look at the sequence here.

Matthew 24:6: “And ye shall hear of wars and rumours of wars: see that ye be not troubled: for all these things must come to pass, but the end is not yet.”

Some will not like this Antichrist. These communist nations don’t like this guy here, so there will be war breaking out. The world’s going to like him, but there will be these rogue nations that are not going to join the United Nations.

Don’t be troubled, why? Because all these things must come to pass, but it’s not the end yet. Look at this, if the millions of deaths that are going to get slaughtered and the end is not yet, you can imagine how worse it’s going to get.

Matthew 24:7: “For nation shall rise against nation, and kingdom against kingdom: and there shall be famines, and pestilences, and earthquakes, in divers places.”

World War II will not be the last war. There’s going to be World War III.

We say it’s going to be 4 to 5 because this ‘World War III’ is like what we heard throughout history, the Cold War. So they didn’t give it a world war name, but like the Cold War, the Vietnam War, the Korean War, etc.

This could be a continuation of the Cold War. One of the worst wars one can think of that military soldiers would talk about is the Vietnam War, and this is under the communists. Think about it, how bad it’s going to be, and doing it all in the name of peace while soldiers are dying for their country, thinking they’re dying for a good cause. It’s sad.