Satan Has a Son 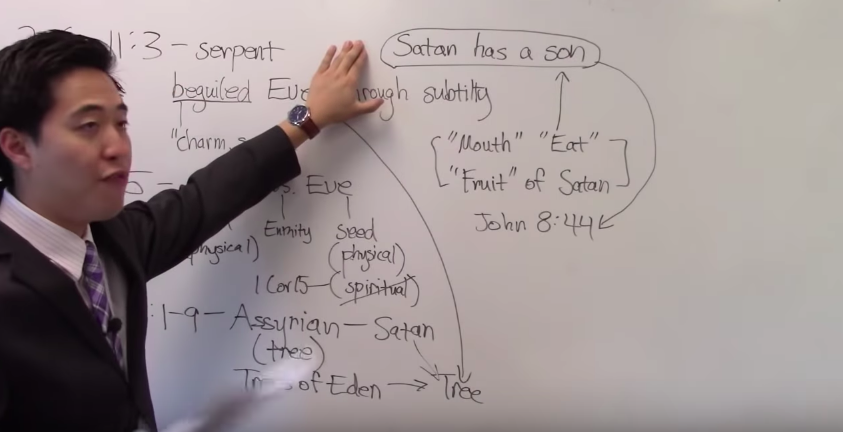 I’m going to prove to you that Satan has a son.

1 Corinthian 11:3 – I fear lest by any means as the serpent beguiled Eve through his subtlety so your minds should be corrupted from the simplicity that is in Christ.

The word beguile in the KJV does not mean deceive, it also means “seduce” and “trick.”

Genesis 3:15 – after the serpent beguiled Eve, God says to the serpent: I will put enmity enmity between thee and the woman, and thy seed against her seed.

Was it a spiritual seed? No, 1 Corinthians 15 says our spiritual seed is not from Adam and Eve. So the seed that God was referring to in Genesis 3 must have been a physical one.

Ezekiel 31:1-9 And it came to pass in the eleventh year, in the third month, in the first day of the month, that the word of the Lord came unto me, saying, Son of man, speak unto Pharaoh king of Egypt, and to his multitude; Whom art thou like in thy greatness?Behold, the Assyrian was a cedar in Lebanon with fair branches, and with a shadowing shroud, and of an high stature; and his top was among the thick boughs.The waters made him great, the deep set him up on high with her rivers running round about his plants, and sent her little rivers unto all the trees of the field. Therefore his height was exalted above all the trees of the field, and his boughs were multiplied, and his branches became long because of the multitude of waters, when he shot forth. All the fowls of heaven made their nests in his boughs, and under his branches did all the beasts of the field bring forth their young, and under his shadow dwelt all great nations. Thus was he fair in his greatness, in the length of his branches: for his root was by great waters. The cedars in the garden of God could not hide him: the fir trees were not like his boughs, and the chestnut trees were not like his branches; nor any tree in the garden of God was like unto him in his beauty. I have made him fair by the multitude of his branches: so that all the trees of Eden, that were in the garden of God, envied him.

Assyrian here is recognized as a spiritual evil being (Satan). There were other trees apart from Satan in the Garden of Eden. God called Satan as the tree of knowledge of good and evil.

Eve is beguiled by the tree of knowledge of good and evil.

Proverbs 30:20 Such is the way of an adulterous woman; she eateth, and wipeth her mouth, and saith, I have done no wickedness.

Revelations 17: 1 And there came one of the seven angels which had the seven vials, and talked with me, saying unto me, Come hither; I will shew unto thee the judgment of the great whore that sitteth upon many waters: With whom the kings of the earth have committed fornication, and the inhabitants of the earth have been made drunk with the wine of her fornication.

God connects the eating of the mouth/drinking of the wine with sexual encounters/fornication.

John 8: 44 Ye are of your father the devil, and the lusts of your father ye will do. He was a murderer from the beginning, and abode not in the truth, because there is no truth in him. When he speaketh a lie, he speaketh of his own: for he is a liar, and the father of it.

Why we are now children of Satan (if we are not saved) is because of this transaction between Eve and Satan. And also, within this verse, the lust which denotes sexual things again was linked to Satan.

2 Thessalonians 2-3 Let no man deceive you by any means: for that day shall not come, except there come a falling away first, and that man of sin be revealed, the son of perdition;

Yes, Satan has a son and that’s the Antichrist.

1 John 4:3 And every spirit that confesseth not that Jesus Christ is come in the flesh is not of God: and this is that spirit of antichrist, whereof ye have heard that it should come; and even now already is it in the world.

This is a spiritual application, but everyone (unbelievers) who deny that Jesus is Christ are children of the antichrist.

Genesis 4:1-2 And Adam knew Eve his wife; and she conceived, and bare Cain, and said, I have gotten a man from the Lord. And she again bare his brother Abel. And Abel was a keeper of sheep, but Cain was a tiller of the ground.

Let’s look at one more evidence that shows that Satan has both physical and spiritual descendants. The verses say that Adam knew his wife once, but out came 2 sons. This can indicate that Abel and Cain were twins.

If Eve had sexual encounter with Satan, then one of those children is from Satan. That is scientifically supported as super fecundation – twin birth from two different fathers.

Eve thought that “she has gotten a man from the Lord”. But look at the verse here:

1 John 3:12 Not as Cain, who was of that wicked one, and slew his brother. And wherefore slew he him? Because his own works were evil, and his brother’s righteous.

It could mean that he was literally one of Satan’s children.

There are 4 conclusions we can draw: