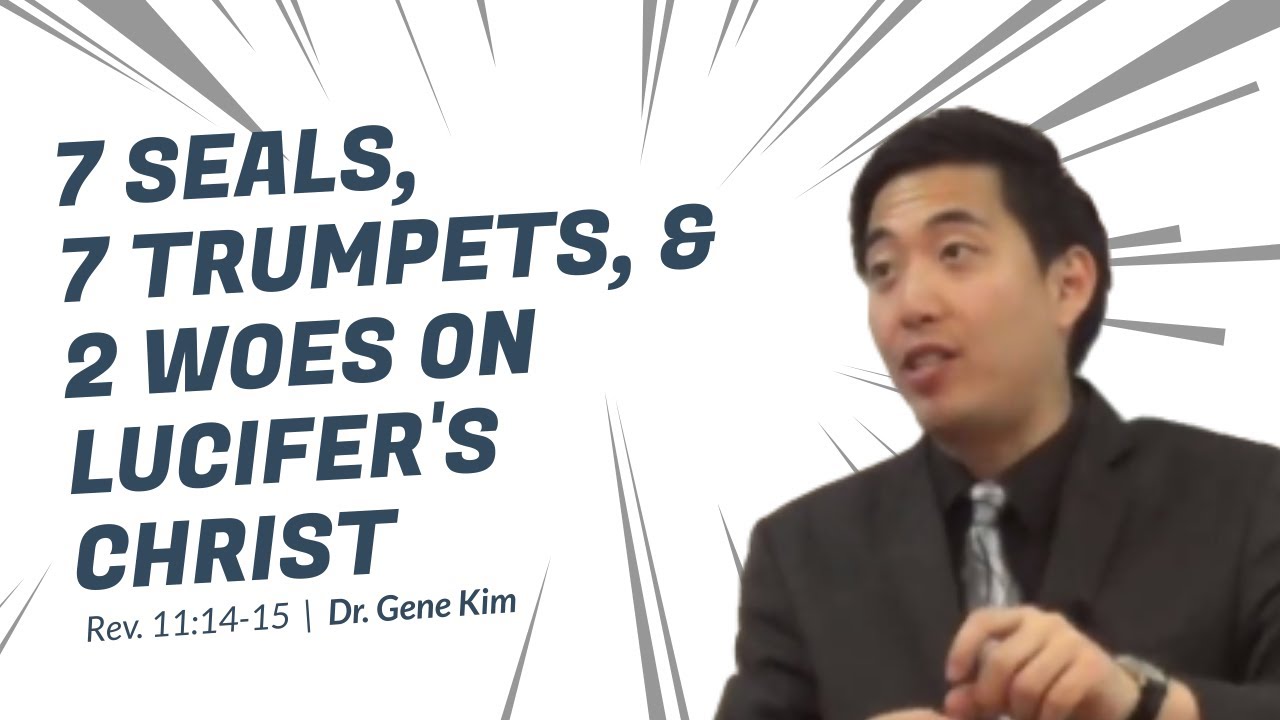 Here’s a review of Revelation so far: we know that we have seven seals, seven trumpets, and three seals.

Remember that it’s an overview. It’s not in sequence. It doesn’t make sense for it to be in sequence because Jesus is coming here at the sixth seal. One of the trumpets took like a months-long during this latter 3.5 years of tribulation. The latter 3.5 years of tribulation is the abomination. They’re getting martyred and the temples are contaminated. The Antichrist gets resurrected this time, and Jesus is coming. So the seventh seal is an overview.

But Revelation 11:14 says the second woe is past. So sometime between the sixth and seventh trumpet, there is woe number two and also an earthquake.

Anyone who says they want to go through the tribulation, is high on crack. Isn’t this a mess? Whether you get ten years, seven years, or three and a half years, there’s too much going on in there. You’re not going to catch a breath.

Revelation 11:14: “The second woe is past; and, behold, the third woe cometh quickly.”

The second woe is past (the earthquake), and the third is about to come.

Revelation 11:15: “And the seventh angel sounded; and there were great voices in heaven, saying, The kingdoms of this world are become the kingdoms of our Lord, and of his Christ; and he shall reign for ever and ever.”

“And the seventh angel sounded;”

The seventh angel sounds the trumpet.

“and there were great voices in heaven, saying,”

Once the seventh angel sounds the trumpet, there are voices up in heaven and they are crying out, saying.

All the kingdoms of this world now belong to God.

“and of his Christ;”

They belong to His Son, Jesus.

“and he shall reign for ever and ever.”

That’s where you get the famous Hallelujah chorus, portions of it are from this verse. Can you imagine, amid all this chaos and terror, all of a sudden you get these great voices singing Hallelujah Hallelujah while everyone’s crying out ‘This is the end of the world!’.

In Revelation 11:15, it says “kingdoms“, unlike some of your modern versions that say “kingdom” because the devil wants to keep his United Nations, he wants to keep all his kingdoms.

Why did God say kingdoms? Because He knows that it’s not going to be like a Roman empire or a single Assyrian empire. No, He knows it’s going to be all these kingdoms gathering together, the United Nations. They all belong to God, not to the Illuminati, not to Satan, not to the Freemasons, not to Lucifer.

Notice also that the verse says “and of his Christ;.”

Do you know Lucifer in Ezekiel 28, he’s called the anointed cherub? Did you know what Christ means? Christ means ‘anointed’. So Lucifer was an anointed being.

Who’s in charge today of the United Nations? It’s this Christ: Lucifer. He was known as the anointed (Christ) cherub. That’s why you get the Antichrist. But God says no, the world’s kingdoms don’t belong to this Christ (Lucifer). It belongs to his Christ, that’s God’s Christ, the right Christ. And He shall reign forever and ever.

Revelation 11:16: “And the four and twenty elders, which sat before God on their seats, fell upon their faces, and worshipped God,”

“And the four and twenty elders,”

That’s us, we’re up in heaven.

“which sat before God on their seats,”

So we have our own seats. Remember in Revelation 2, 3, 5, 1, God gave a promise that the 24 elders or His church would have a seat to rule with Him.

“fell upon their faces, and worshipped God,”

We bowed down before God, and obviously, we worship God. So all that time we’re worshipping God when they’re singing. That’s going to be something. You thought true worship is found in everyday Sunday service when you sing a hymn or during a blowout meeting or summer revival camp? They will sing Hallelujah while we will fall flat on our faces before the King of kings and Lord of lords.

Revelation 11:17: “Saying, We give thee thanks, O Lord God Almighty, which art, and wast, and art to come; because thou hast taken to thee thy great power, and hast reigned.”

How do we worship God? By saying this:

“Saying, We give thee thanks,”

We give God thanks. Hence we get our idea of Thanksgiving. That’s the day we can observe how we thank our God, but giving thanks to God should not only be on a specific day, once a year. It should be every day in your life.

We give God Almighty thanks. He is Almighty, He is the Lord God.

He will be coming. He’s past, present, and future.

“because thou hast taken to thee thy great power,”

He takes the power from Satan and gets it Himself.

If you recall, in Luke 4, Satan said that ‘These kingdoms I will give to you, Jesus’ because it was delivered unto him. Initially, God gave it to Satan but one day, God is going to take it back.