Why is Gene Kim so mean? 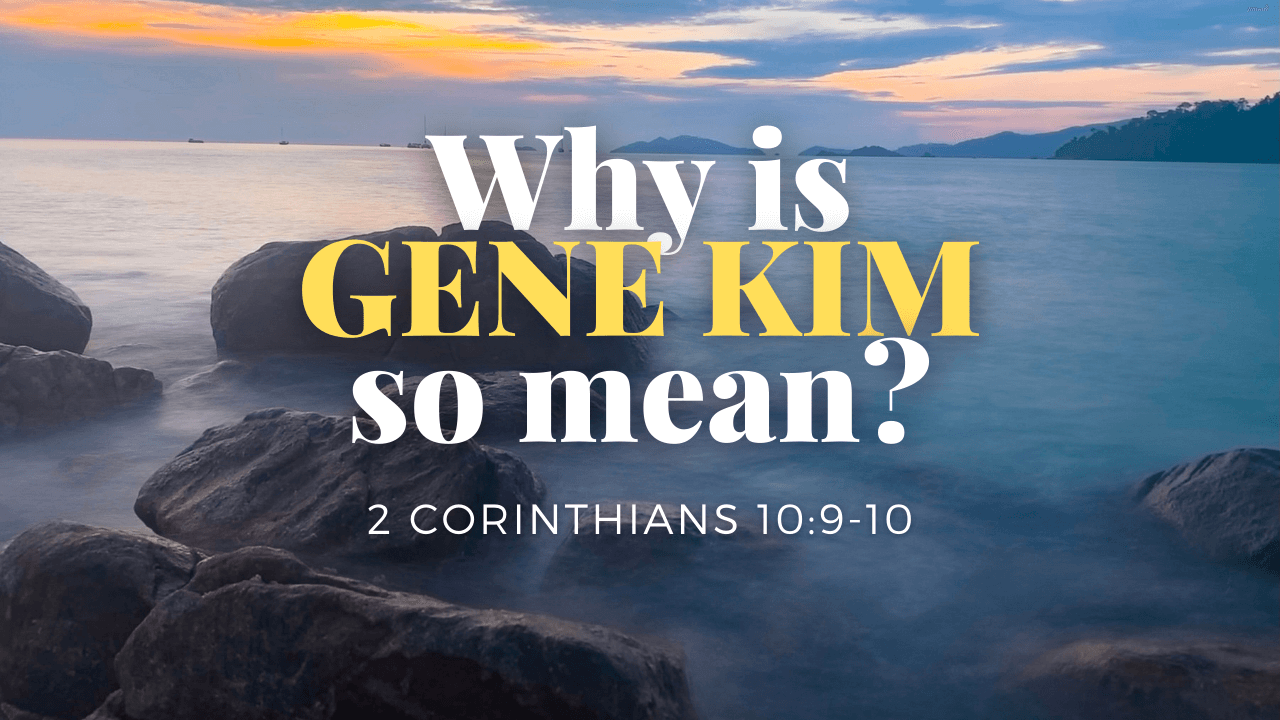 Following the example of Paul

We rely on Paul’s doctrine a lot to inform the way a Christian should live. But let’s see what he says.

2 Corinthians 10:9-10 “That I may not seem as if I would terrify you by letters. For his letters, say they, are weighty and powerful; but his bodily presence is weak, and his speech contemptible.”

Paul terrifies people with his letters. His speech is contemptible, which means rude or crude.

Would you reject the book of Romans or Ephesians because you don’t like Paul’s speech or you think he is mean?

Most people say that Jesus doesn’t speak in a mean way?

Let’s take a look. If we were going out to the streets to preach and that we call “Ye snakes!” We would have to be very careful. But Jesus said precisely that to pastors of that age. Not once, but many times in the 4 gospels.

Matthew 23:33 “Ye serpents, ye generation of vipers, how can ye escape the damnation of hell?”

If we said that someone isn’t saved because their testimony did not show salvation, we think it’s inappropriate. But take a look at what Jesus says.

Matthew 23:15,24 “Woe unto you, scribes and Pharisees, hypocrites! for ye compass sea and land to make one proselyte, and when he is made, ye make him twofold more the child of hell than yourselves. Ye blind guides, which strain at a gnat, and swallow a camel.”

What do Old Testament prophets do?

Nehemiah 13:25 “And I contended with them, and cursed them, and smote certain of them, and plucked off their hair, and made them swear by God, saying, Ye shall not give your daughters unto their sons, nor take their daughters unto your sons, or for yourselves.”

“I don’t like it when the pastor makes fun of people. He’s a man of God.”

Let’s look at what Elijah said to Baalite priests who were cutting themselves until they bled. Elijah mocked them.

1 Kings 18:27 “And it came to pass at noon, that Elijah mocked them, and said, Cry aloud: for he is a god; either he is talking, or he is pursuing, or he is in a journey, or peradventure he sleepeth, and must be awaked.”

There’s a time and place for everything

If a pastor does this 24-7, he is not a good pastor and not a good Christian.

But, when there are these pastors and people who have been given the truth and yet are causing problems, the pastor will rebuke them, kick them out of the church.

If there’s some wolf (false pastor) who is trying to steal sheep or poison sheep, the Pastor will rebuke, be sarcastic, and rude to them.

Some of you tried to use love, right?

Then you prayed for them and talked gently to them? Did it work? You talk to them long enough. When you use these rude or sarcastic remarks, you think you’re going to be chasing them away? No, they do not want to be saved, to begin with.

Father, forgive them for they do not know what they do.

If there is someone who grew up in a sodomite background, lost and condemned without God, don’t ever refuse to witness to them. You could have been one of them going to hell. So, do not ever say that you do not want to witness to them. There is a time and place for everything.