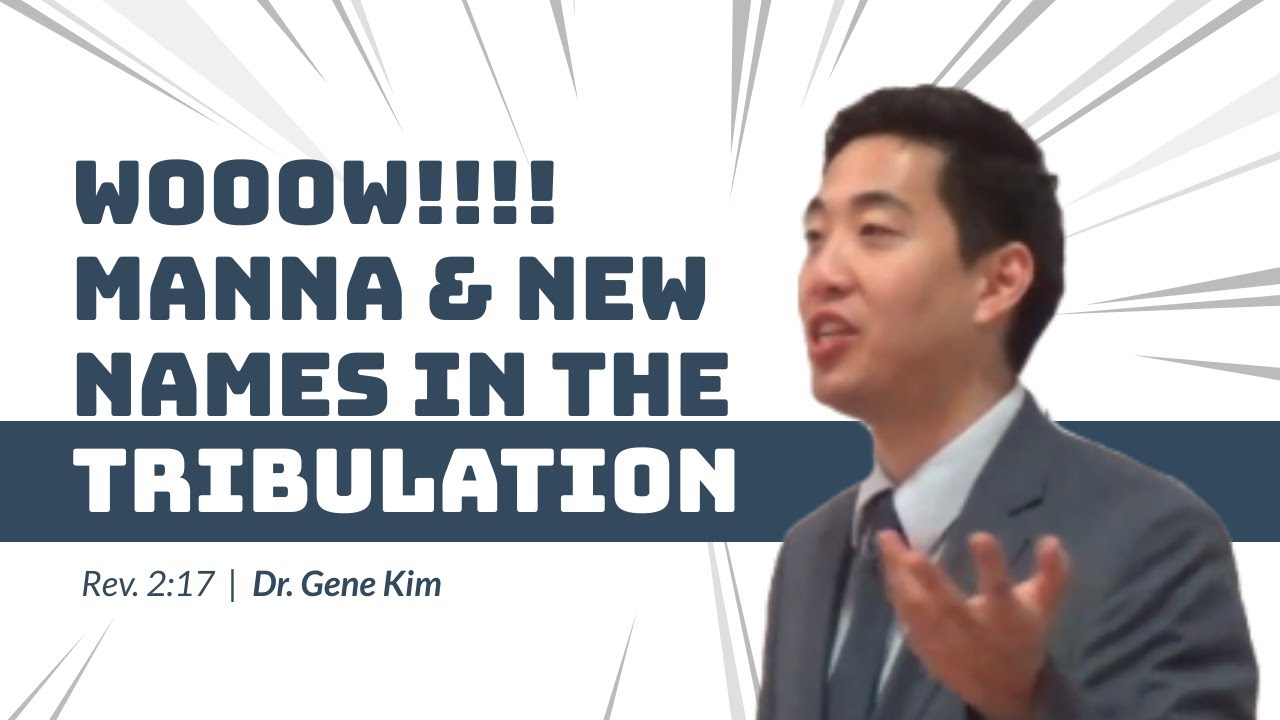 Revelation 2:17 “He that hath an ear, let him hear what the Spirit saith unto the churches; To him that overcometh will I give to eat of the hidden manna, and will give him a white stone, and in the stone a new name written, which no man knoweth saving he that receiveth it.”

So y’all got ears right? Are you hearing what the spirit is saying?

“let him hear what the Spirit saith unto the churches;”

Are you hearing what the spirit is saying to the churches? So we see church age application here.

Are you churches listening up?

“To him that overcometh will I give to eat of the hidden manna,”

“and will give him a white stone, and in the stone a new name written,”

You’re also going to get a white stone and He’s going to put your new name in there.

“which no man knoweth saving he that receiveth it.”

No man knows this name.

First, let’s look at a church-age application. This is only a theory that the pastor is proposing, it is not a doctrine.

Concerning the manna part, for a church age application, this could be referring to Jesus Christ giving us His own bread from heaven when we got saved.

John 6:48-50 “I am that bread of life. Your fathers did eat manna in the wilderness, and are dead. This is the bread which cometh down from heaven, that a man may eat thereof, and not die. I am the living bread which came down from heaven: if any man eat of this bread, he shall live for ever: and the bread that I will give is my flesh, which I will give for the life of the world.”

Jesus Christ could be that bread for you.

This is very interesting, manna is known as angel’s food. Now, Satan himself was an angelic being, he was more specifically and accurately, a cherubim, not just an ordinary angel. But here’s something more, didn’t you know that manna is Satan’s head? In the book of Psalms, the Bible shows that when the children of Israel are manna in the wilderness, it was from the Leviathan’s head, it was from Satan’s head.

Let’s look at the doctrinal application toward the tribulation. Didn’t you know that in the tribulation, God Almighty is going to feed His people, the Jews, with manna from heaven?

verse 12 ‘that day’ is a future reference. Look up that phrase throughout the Bible, it’s a prophetic timeline toward a future advent, close to the tribulation or in the tribulation.

Micah 7:16-17 “The nations shall see and be confounded at all their might: they shall lay their hand upon their mouth, their ears shall be deaf. They shall lick the dust like a serpent, they shall move out of their holes like worms of the earth: they shall be afraid of the LORD our God, and shall fear because of thee.”

God’s talking that one day, these foreign nations are going to recognize the King of kings and they’re going to worship and bow before Him.

Micah 7:20 “Thou wilt perform the truth to Jacob, and the mercy to Abraham, which thou hast sworn unto our fathers from the days of old.”

God restores the nation of Israel.

When does God conquer the nation, all the nations worship God and He restores the nation of Israel? That’s the end times. We know right here that this is the tribulation application.

Micah 7:14-15 “Feed thy people with thy rod, the flock of thine heritage, which dwell solitarily in the wood, in the midst of Carmel: let them feed in Bashan and Gilead, as in the days of old. According to the days of thy coming out of the land of Egypt will I shew unto him marvellous things.”

How did God feed the people with the rod when they came out of Egypt? What is he talking about? It’s Moses with that rod. What was their diet at that time that they complained about? Manna.

Revelation 2 is a book on end times. What did God say? He said, “I’m going to give them to eat of the hidden manna.” So a doctrinal tribulation application is God is going to feed those Jews. Why? Because they reject the mark of the beast in Revelation 13, where you cannot buy or sell. You cannot eat. So then here are the Jews and they’re starving, then God feeds them with the rod.

How is He going to do that without Moses? Malachi 4, God sends down Moses and Elijah. Revelation 11, you see Moses and Elijah’s workings there: water turning into blood, plagues, etc.

“and will give him a white stone, and in the stone a new name written, which no man knoweth saving he that receiveth it.”

The church receives a new name, it’s white and it’s a name that no one can understand.

When you got saved in the Lord Jesus Christ, God already gave you a new name that no one knows about. The Bible says at 2 Corinthians 5:17 “Therefore if any man be in Christ, he is a new creature: old things are passed away; behold, all things are become new.”. Here’s something very interesting concerning new names. Whenever God gave a new name to a person, He gave it to them in Hebrew. In Old Testament, God told Jacob, ‘You’re no longer Jacob, you’re called Israel’. and that was in Hebrew. What did God say to Abraham? ‘Your name shall no longer be called Abram, but Abraham’. He was speaking in Hebrew at that time. Paul wanted to be something very close to something like a new name, the New Testament said he was originally called Saul but then he switched his name to Paul. Paul is probably the closest you’ll ever see in the New Testament about an old man changing into a new man.

But what you’re going to notice throughout the Bible is that when God gives the name Himself, it was always in Hebrew when He gave that name. Your God is a Hebrew God.

How do we know that? Where was Jesus born from? He wasn’t born in Korea, Africa, or the United States of America. He was born in Israel. Your God is a Jewish Hebrew God.

What did God say about Jesus’s name? His name shall be called Immanuel, God with us. God gave that name to His son and that was in Hebrew.

How God gives names is names that have meaning within them and it’s in a Hebrew context.

Look at the verse here, this is as close as you’re going to get about a name engraved in stones and these are Hebrew names.

Exodus 28:9-10 “And thou shalt take two onyx stones, and grave on them the names of the children of Israel: Six of their names on one stone, and the other six names of the rest on the other stone, according to their birth.”

That’s the closest you’re going to get, Hebrew names engraved on two onyx stones on a priest outfit. Why is that important?

1 Peter 2:5 “Ye also, as lively stones, are built up a spiritual house, an holy priesthood, to offer up spiritual sacrifices, acceptable to God by Jesus Christ.”

The priest has two stones and names on them. Am I likened to that? Yes. You are a spiritual priest of God who’s a spiritual stone building up to that priest. That’s why you got a new name, and it’s in Hebrew spiritually.

That’s the spiritual application to the church. You have a new name in Hebrew that no one knows about because the church is a spiritual priest of God. That’s why you don’t need any priest to confess your sins too. Why? You and I are automatically a priest of God spiritually.

Here’s something very interesting about the white stone. In Numbers 28, the closest to this is the onyx stone. Onyx stones are normally black, not white. But they do sometimes have bands of white or black that alternates. How different religious people who are trying to find spiritual meaning in that is they said that the blackness of the onyx stone is referring to the darkness of your heart but the whiteness is the purity that came out after that, so then you transformed into a new birth or something white.

Don’t we Christians have a new birth in Jesus Christ? Where the blackness of our sin is washed away and we got a new name written down in glory?

Now that book will blow up your mind every single time.

Notice that the tribulation saint can be given a white stone and a new name written that no man knows.

This is pretty true, look at Isaiah 61. These Jews, after they come out of the tribulation and their nation is restored, God gives them a new Hebrew name.

Isaiah 62:1-2 “For Zion’s sake will I not hold my peace, and for Jerusalem’s sake I will not rest, until the righteousness thereof go forth as brightness, and the salvation thereof as a lamp that burneth. And the Gentiles shall see thy righteousness, and all kings thy glory: and thou shalt be called by a new name, which the mouth of the LORD shall name.”

Here, God is talking about when Israel is restored. So this is after the tribulation. “and thou shalt be called by a new name, which the mouth of the LORD shall name.” They will be given a new name but that is if they overcome. Look at the context of Revelation 2, that’s what the verse said, if you overcome then God will do that.

That’s why we see here for a Christian church application, how we overcome is because we believed in Jesus Christ for our salvation based on 1 John 5.

But also, this overcoming, if you look at Revelation 21 and 22, overcoming has to do with tribulation saints doing faith and works for salvation. They’re totally different from Christians in their salvation and in God’s plan and setup. Their overcoming is literally overcoming the Antichrist, they have to work hard to fight and resist against him, not yield to his mark etc.