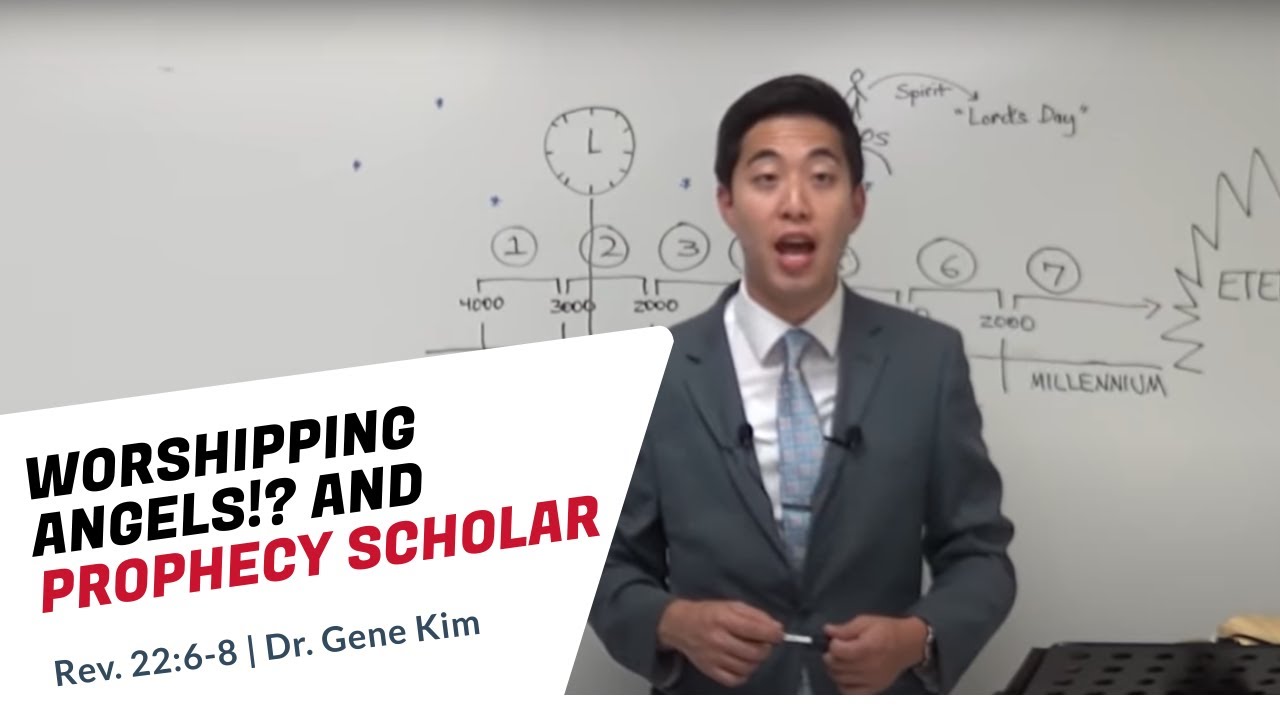 Revelation 22:6 “And he said unto me, These sayings are faithful and true: and the Lord God of the holy prophets sent his angel to shew unto his servants the things which must shortly be done.”

“and the Lord God of the holy prophets”

The Lord God, that’s His title, is in charge of the holy prophets.

Notice that they’re called holy prophets. There are occasions in your Bible where you’ll see holy prophets, holy men of God spake as they were moved by the holy ghost who were writers, holy brethren. A lot of times we would confuse this that it is referring to a sinless person, so to speak, but you need to understand this doctrine called ‘Imputation’.

Imputation is where God’s counting the person as righteous, it is not that the person is sinless, it’s in God’s eyes that He says ‘I’ll count that person as sinless, as holy’. Why? The reason why he’ll say holy prophet, holy brethren is because they’re connected to holy work, that’s God’s work. Isn’t God’s work holy? Yes, that’s why He’ll automatically dub the person as holy. If you look at the book of Numbers, it’s amazing that despite the children of Israel being one of the most wicked people you’ll ever find, yet God says that He did not see sin in His people. That’s because of imputation.

“sent his angel to shew unto his servants”

The holy prophet’s God sent his angels, which we saw at Revelation 21:9 and even in Revelation 1 where the angel showed John. Notice also that it says ‘servantS’ so the angel’s not just showing to John, God intends to show it to all of us. That’s why John wrote the book of Revelation so that all of God’s servants can see what He planned for us for eternity.

“the things which must shortly be done.”

Everything that’s happening in the book of Revelation, has to happen real soon.

‘Well God’s a liar, it’s been past 2000 years already’. Remember the other doctrine that was taught in Revelation 1 is about God’s timing. 2 Peter 3:8-9 a thousand years can be like one day to God. So in God’s mind, He’s seeing only 2 days here.
That’s why in the Old Testament and other verses in the Bible, there’s a significance where God says at the third day there’s going to be some sort of life or resurrection or renewal. To God, it’s not a long time, it’s shortly that must come to pass.

The imminent return of Jesus Christ

Revelation 22:7 “Behold, I come quickly: blessed is he that keepeth the sayings of the prophecy of this book.”

That’s part of the doctrine of the imminent return of Jesus Christ. This is very important and you need to believe in this.

There’s a false doctrine called post-tribulation rapture or post-tribulationism. They either believe in rapture after the tribulation or they do not believe in a rapture at all. They believe that they’re going to bring in the kingdom of God and then Jesus will be so pleased that He’s going to come down and rule over the Millennium. That’s why a lot of churches are saying that they’re building the kingdom of God here on earth and they need more of your offerings and that they have to make more lavish buildings.

A-millennial thinks that we’re in the Millennium right now. They’re out of their mind thinking that we’re living in the Millennial kingdom right now. Do you think that this is a Millennial kingdom with Covid-19, the riots, and all this idiocy that’s rising? This is not God’s kingdom on earth, this is the devil’s kingdom with all his minions running the show.

The imminent return of Christ is at any moment, based on verse 7. We believe Jesus Christ can come down at any moment. This seems to conflict with the idea of a time system where Jesus Christ is going to come down, however here are some interesting arguments where there are verses in the Bible where it says a person passing away shortly before God appoints a time.

God would appoint times, calendars and clocks but a lot of times He can cut it short. Matthew 24 says about the Lord is going to cut the tribulation timeline short for the elect’s sake. Why? Because this is God’s clock, He can do whatever He wants. He wants to see how mankind moves and goes according to their free will. You got to realize that there were so many times the Antichrist could have come out and Jesus Christ could have come down.

Read the book of Acts, it’s as if the disciples were expecting Jesus Christ to come during their timeline, it’s an imminent return. They believe that he was going to come during their time but they died and Jesus still hasn’t come down yet. Why? There were many chances the Lord could have come down but because of mankind’s rejection of Jesus Christ, it postponed His early coming.

That’s an interesting doctrine called the postponement theory. If the Jews received their Messiah at the book of Acts, when Stephen was about to be stoned to death, he said that Jesus was not sitting at the right hand of God. The Bible says He’s sitting down until He comes down for us but at Acts, He wasn’t sitting down, He stood up as if He was about to start the rapture. But then the Jews rejected Stephen’s message. At Acts 2 and 4 etc, so many times the disciples were telling Jews to get ready, the Messiah is going to be coming, but after Acts 7, there was a change there: they switched to Gentiles. Then Paul said that God’s shaking the dust off of the Jews and later on during the Pauline epistles, Paul said that they’re done, they’re put aside until later on.

When people were thinking during the days of world war II that Jesus was going to come, or even with Covid 19 or years beforehand, you got to understand that they’re not entirely wrong. Those could have been the perfect timetable Jesus could have come. But why didn’t He come yet? Because He’s looking at the heart and condition of mankind first. Just because God has an appointed time, that doesn’t mean that’s going to prevent Him from coming earlier. There are verses in the Bible where God can cut the time short, that He can come whenever He wants to. Time doesn’t control God, God controls time. He can do whatever He wants with time.

“blessed is he that keepeth the sayings of the prophecy of this book.”

Blessed is the person who keep the sayings, the words of God when it relates to prophecy in the Bible.

One of the basics of theology is called eschatology, it is one of the branches in theological bible study which is the doctrine of end times. Pastors should not belittle studying end times. In fact, because a lot of pastors lack in teaching end times, they focus on present conditions of “being a better you and being happy”, that’s why a lot of people they get bored or they’re not growing. Here’s another warning to the preachers: if you don’t teach end times, the people are going to turn to heretics who teach end time stuff and the majority of those people are post-tribulation, if not post-millennial in their teaching on end times.

Do not worship angels

Revelation 22:8 “And I John saw these things, and heard them. And when I had heard and seen, I fell down to worship before the feet of the angel which shewed me these things.”

“And I John saw these things, and heard them.”

John is talking about himself, he saw them and he heard them.

“And when I had heard and seen, I fell down to worship before the feet of the angel which shewed me these things.”

After John heard and seen everything in Revelation, he couldn’t help but fall down and worship before the feet of the angel who showed him all those things.

Revelation 22:9 “Then saith he unto me, See thou do it not: for I am thy fellowservant, and of thy brethren the prophets, and of them which keep the sayings of this book: worship God.”

“Then saith he unto me, See thou do it not:”

So when you got these pretty little angels over the Catholic churches and people just bow down in front of the angel and pray before it. No, the Bible says that’s wrong. In fact, the angel would tell you, make sure you don’t do it.

“for I am thy fellowservant,”

The angels are fellow servants. As a matter of fact, they will even be your servant, not just your fellow servant. Why? Because they’re going to be ministering to you, according to Hebrews 1.

“and of thy brethren the prophets,”

So the angel is at the same level as John’s brothers and sisters in Christ and his brethren, the prophets. So John is in line with the fellow prophets like Daniel, for example.

“and of them which keep the sayings of this book:”

The angel is in line with the people who keep the prophetic statements in this book. That’s us.

There’s a group of gnostics that Paul warned about who worship angels. The Bible says these gnostics were contemporary during the apostles’ times, they were already corrupting the Bible during the time of the apostles. That’s how Satan immediately moved in. Do you know how fast he moves in with his poison?

Right now, even within a church service, underneath your nose where you least expect it.