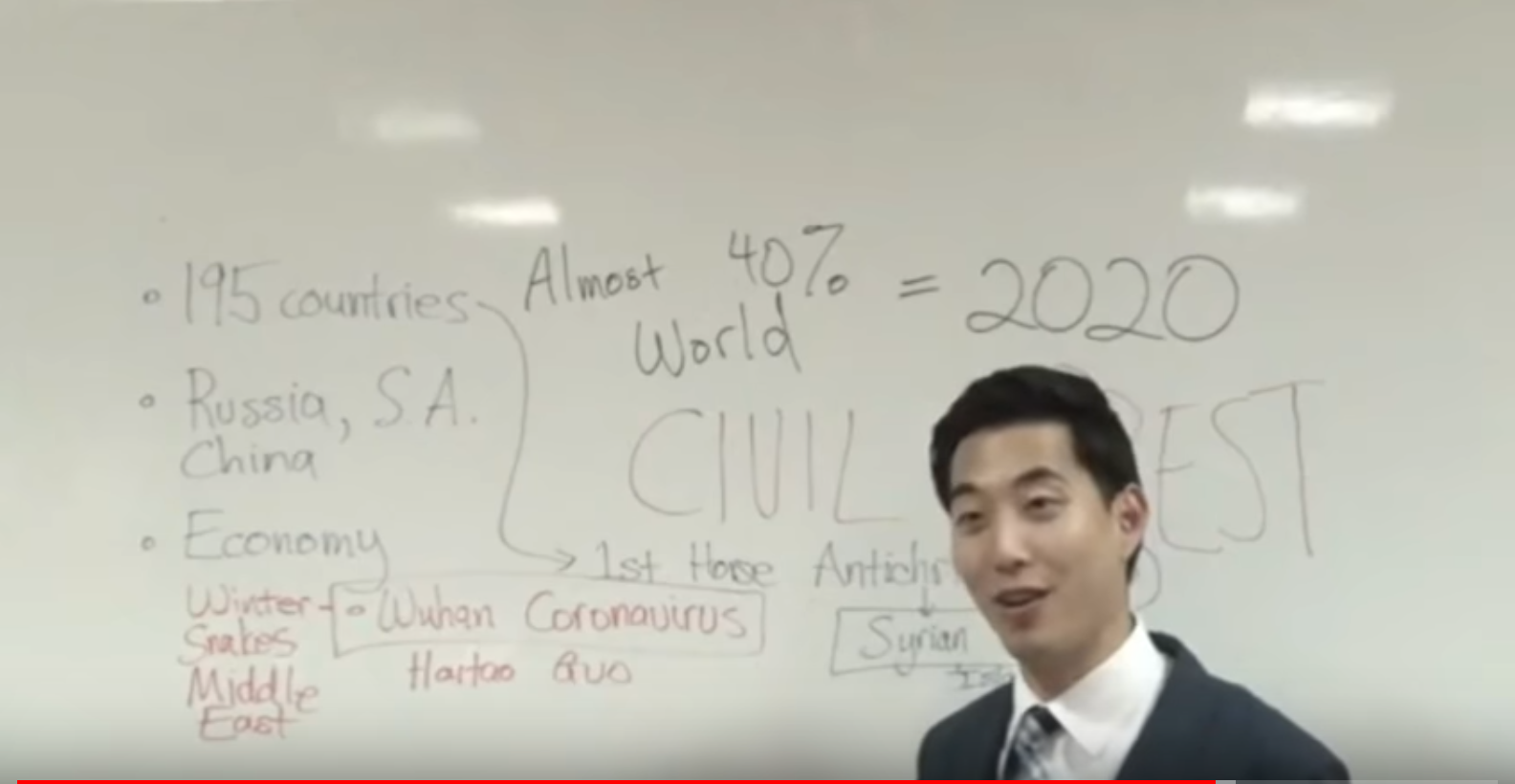 A recent CNBC article published by David Reid is titled Almost 40% of the World’s Countries Will Witness Civil Unrest in 2020, Research Claims. This article states that:

The article neatly lines up with the Bible’s descriptions of the end times catastrophe in the book of Revelation.

40% of All Countries in Civil Unrest

The article reveals that much of the civil unrest will be caused by people trying to oppose the government. In Revelation, the antichrist will stamp out the civil unrest in the name of peace, but in the process, he will actually be taking away freedom:

Revelation 6: 1-2 “And I saw when the Lamb opened one of the seals, and I heard, as it were the noise of thunder, one of the four beasts saying, Come and see. And I saw, and behold a white horse: and he that sat on him had a bow; and a crown was given unto him: and he went forth conquering, and to conquer.”

According to the article, 47 countries, or nearly a quarter of all countries witnessed a surge in protests and unrest in 2019. This figure is said to likely rise in 2020. This coincides with the antichrist stamping out the civil unrest for the sake of peace.

The first horseman in white is mentioned in verse 2. He will also be the antichrist, and his religion will be Catholicism. The Catholic Pope dresses in the color white and wears a crown. The antichrist will wear a crown as mentioned in Revelation 6:2 as well. The Pope is also the one religious figure with an abundance of secular power.

The antichrist’s ethnicity will be Syrian Jew, as this will allow him to relate to both Islam and Judaism in addition to Catholicism. By getting the three largest’s religions on his side, he will also get the majority of the world on his side.

The article’s second claim deals with countries with a high risk of security force backlash. Similar events are detailed in Revelation 6:

Revelation 6: 3-4 “And when he had opened the second seal, I heard the second beast say, Come and see. And there went out another horse that was red: and power was given to him that sat thereon to take peace from the earth, and that they should kill one another: and there was given unto him a great sword.”

The color red has historically been linked to the country Russia/Soviet Union. China is associated with the color red as well. Verse 4 talks about power being given to those who take away peace from the world. This matches up with many modern Muslim nations, as the Quran talks about taking peace away from infidels and unbelievers by the sword.

The article’s third claim deals with potential economic strain caused by the civil unrest and security force backlash. This can be observed in Revelation 6 as well:

Revelation 6: 5-6 “And when he had opened the third seal, I heard the third beast say, Come and see. And I beheld, and lo a black horse; and he that sat on him had a pair of balances in his hand. And I heard a voice in the midst of the four beasts say, A measure of wheat for a penny, and three measures of barley for a penny; and see thou hurt not the oil and the wine.”

The pair of balances mentioned in verse 5 can be a symbol of the economy.

According to the article, “there will be increased pressure on global firms to exercise corporate responsibility.” The civil unrest will cause will likely affect corporations, “especially those in countries rich in natural resources where mining and energy projects often need high levels of protection.” Verse 6 refers to the sparing of important commodities: oil and wine.

A novel coronavirus originating in China has been spreading worldwide, and many have been wondering what could have been the source of the virus. Meanwhile, a CNN Health article titled Snakes Could be the Source of the Wuhan Coronavirus Outbreak was recently published. It states that the Many-banded krait (also known as the Taiwanese or Chinese krait) is a highly-venomous species of snake found in Central/Southern China and Southeast Asia. There are inferences that the snakes may have been involved in the spreading of the virus. The illness was first reported in late December of 2019 in Wuhan and has been rapidly spreading to multiple countries since then. Researchers also found that the novel coronavirus is in the same family of viruses as the severe acute respiratory syndrome coronavirus (SARS-CoV) and the Middle East respiratory syndrome coronavirus (MERS-CoV). Both of these viruses have killed hundreds of people in the last 17 years.

A similar outbreak was mentioned in Numbers 21, and it was associated with snakes as well. The children of Israel were exposed to an infection that spread throughout all of their camps:

Numbers 21: 5-7 “And the people spake against God, and against Moses, Wherefore have ye brought us up out of Egypt to die in the wilderness? for there is no bread, neither is there any water; and our soul loatheth this light bread. And the Lord sent fiery serpents among the people, and they bit the people; and much people of Israel died. Therefore the people came to Moses, and said, We have sinned, for we have spoken against the Lord, and against thee; pray unto the Lord, that he take away the serpents from us. And Moses prayed for the people.”

The word “fiery” may be associated with the symptoms of the infection, similar to the uncomfortable symptoms caused by the Wuhan coronavirus.

Verse 7 indicates that the infection was brought onto the people by the Lord. The second time the Lord used serpents to spread Israel’s judgment is in Jeremiah 8:

Jeremiah 8: 17-22 “For, behold, I will send serpents, cockatrices, among you, which will not be charmed, and they shall bite you, saith the Lord. When I would comfort myself against sorrow, my heart is faint in me. Behold the voice of the cry of the daughter of my people because of them that dwell in a far country: Is not the Lord in Zion? is not her king in her? Why have they provoked me to anger with their graven images, and with strange vanities? The harvest is past, the summer is ended, and we are not saved. For the hurt of the daughter of my people am I hurt; I am black; astonishment hath taken hold on me. Is there no balm in Gilead; is there no physician there? why then is not the health of the daughter of my people recovered?”

Today people are still looking for a solution for the coronavirus, but in verse 17, the judgment cannot be charmed away or solved. According to verse 22, the virus cannot be solved by medical interventions because it is a judgment from God. Verse 20 also states the time of the year the judgment was cast, and it is around the same time the virus was found in China.

When people reject and sin against the Lord, He tends to send judgment that can be spread about the people. No medical solution will be available. This occurs in Amos 9 as well:

Amos 9: 3 “And though they hide themselves in the top of Carmel, I will search and take them out thence; and though they be hid from my sight in the bottom of the sea, thence will I command the serpent, and he shall bite them:”

Doctrinally-speaking, we know there is a serpent at the bottom of the sea. The serpent is Satan, and he swims there because Hell is located underneath the ocean.

Revelation 12: 14-15 “And to the woman were given two wings of a great eagle, that she might fly into the wilderness, into her place, where she is nourished for a time, and times, and half a time, from the face of the serpent. And the serpent cast out of his mouth water as a flood after the woman, that he might cause her to be carried away of the flood.”

The serpent in the passage is attempting to persecute the woman, and this will occur in the Tribulation as well.

Are These Current Events a Fulfillment of Scripture?

While we cannot be certain that the Wuhan coronavirus itself is a fulfillment of scripture, we are reminded that similar events have occurred in the Bible. We know that when God does things on Earth he has control over everything. He is often trying to teach us or warn us of the things to come. Currently, He is showing us that however bad the coronavirus may be, it does not compare to the judgments that will be cast during the Tribulation.

In regards to the civil unrest, rogue nations, and economic strain, scripture is currently being fulfilled. Eventually, the world will get the savior that it desires, but it will be Satan incarnate: the antichrist.