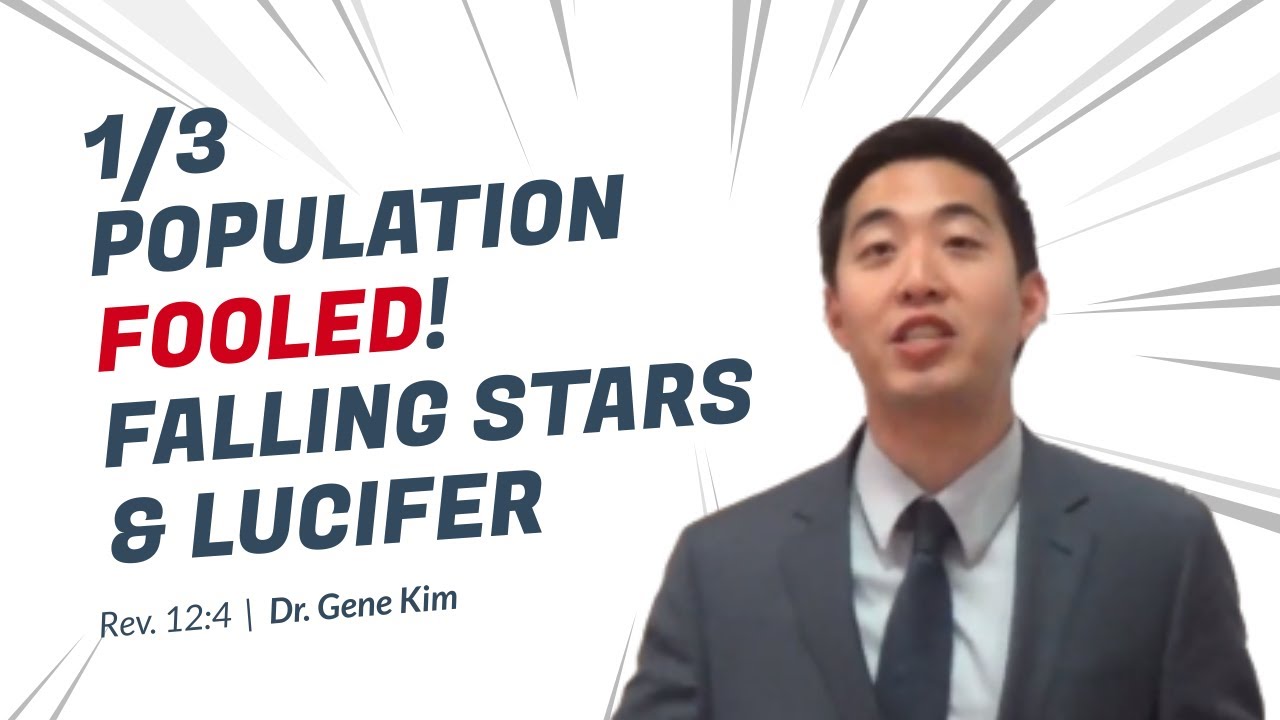 We understand that the seven headed dragon with ten horns is referring to Satan but when we look at the specifics, it would be referring to the ten powers and seven ancient kings throughout all time. We went from Nimrod all the way down to the Roman power, Caesar, and then it’s carried into modern forms with England, Russia and America.

Now let’s talk more about what happens with these two wonders in heaven. Remember there’s the woman with child and there’s also the great red dragon. These are the two wonders at Revelation 12.

Previously we’ve proven that the woman is referring to Israel, now we’re going to expound on the child a little more.

Revelation 12:4: “And his tail drew the third part of the stars of heaven, and did cast them to the earth: and the dragon stood before the woman which was ready to be delivered, for to devour her child as soon as it was born.”

“drew the third part of the stars of heaven,”

He took a third of the stars that are in heaven with him.

“and did cast them to the earth:”

They were fallen down from heaven to the earth.

This third part of the stars are referring to the angels at Revelation 12:7.

Revelation 12:9: “And the great dragon was cast out, that old serpent, called the Devil, and Satan, which deceiveth the whole world: he was cast out into the earth, and his angels were cast out with him.”

When the dragon is cast out from heaven to the earth, he’s cast out with his angels. At Revelation 12:4, “his tail drew the third part of the stars of heaven, and did cast them to the earth:”, so the stars are referring to the angels.

Did a third part of the angels get cast down from heaven to earth in Genesis?

Notice that this is a third part of the stars in heaven. A long time ago when Satan rebelled against God, he has a third of the angels join him on his side and they tried to rebel against God and God kicked them out of heaven. But, that did not happen in the book of Genesis and that’s a traditional teaching that you’ll hear in many churches today. Where did you see this part about a third of the angels cast down from heaven to the earth? Revelation. That’s the opposite from Genesis. Genesis is the book of beginnings, Revelation is the end. So what happened at Genesis?

There is no doubt that there is some truth here. The truth is that Satan had angels who joined his side and it looked like all of them were cast out of heaven and so they no longer have access to God’s heaven. They had no access to all of God’s creation that time. So this is the teaching about the Genesis gap, what God did was that He gave them no kingdom at all, in heaven or on earth. They all had completely no access whatsoever, He drowned it all out with the universal flood.

However, God gave the dominion to mankind, that’s why Satan was jealous and he wanted mankind to fall. Why? So that he can reclaim his kingdom. Obviously God’s third heaven was not given dominion to mankind. Mankind’s dominion was throughout all the universe, on all of God’s creation: the world, dry land, sea creatures, land animals, first and second heaven etc. That was man’s domain, but not His third heaven. If Satan took over that part of the dominion of man, it makes sense that Satan and his angelic beings have no access to the third heaven but the rest of the heavens, they get dominion. That’s why you hear a lot of things concerning conspiracies about the elites who rule in this world and UFOs who fly throughout the space. Why? Because that’s Satan’s territory.

Now, notice here that Satan’s territory here at the second heaven where the stars are located, he’s going to lose this territory over here and all he’s got left is the first heaven. That’s why the Antichrist’s reign is very important to Satan on this earth because he’s going to get kicked out of second heaven and start over at earth. He’s literally going to be right here on this earth with the humans where the Antichrist and false prophets are.

Now that we’ve seen the whole story, let’s see how this rebellion worked at the beginning. There were no numbers given, all we know when Lucifer and his angelic beings rebelled against God, how many in number, we don’t know but he did take a portion where they were kicked out of all of God’s creation. But they reclaimed the first and second heaven when mankind fell.

Isaiah 14:12-14:“How art thou fallen from heaven, O Lucifer, son of the morning! how art thou cut down to the ground, which didst weaken the nations! For thou hast said in thine heart, I will ascend into heaven, I will exalt my throne above the stars of God: I will sit also upon the mount of the congregation, in the sides of the north: I will ascend above the heights of the clouds; I will be like the most High.”

If you look at the next verse at Isaiah 14, it says “Yet thou shalt be brought down to hell, to the sides of the pit.” So in his rebellion, God created hell. When God created hell, which is before Adam and Eve, it was not just for Satan, but his angels too. That proves that there were angelic beings, fallen angels, that did side with Lucifer during his rebellion but the exact number of a third of them, that did not come from anywhere in the Bible except Revelation. That’s a future time period.

Matthew 25:41 “Then shall he say also unto them on the left hand, Depart from me, ye cursed, into everlasting fire, prepared for the devil and his angels:“

Why was hell prepared? It was for the devil and his angels. So we can agree with that, but this ‘a third’ in number didn’t come from anywhere, it came from Revelation.

Notice that he draws a third of them to his side and then they start their rebellion against the Lord God Almighty.

In verse 4, it says that his tail drew the third part of the stars of heaven.

The first possibility is that it could be referring to his army left over, the reason why we say leftover is that at the pre-Adamic flood, the Lord was trying to drown out the whole universe and the book of Jude shows that there are currently fallen angels in their territory in hell, which we call Tartarus, so the remaining part of his armies was probably in Tartarus.

The second possibility is that he’s trying to find more numbers again, and that’s very possible. In Revelation 20, Satan lost his whole army but when he comes out of the bottomless pit, he’s trying to accumulate a new army so he goes throughout the whole world and tries to deceive people and get them to his side. If Satan does that at Revelation 20, this could be referring to Satan trying to deceive the angels again and accumulate them to his side. That’s very possible because you’re dealing with the greatest deceiver throughout all-time in history.

How can people be so blind not to see no matter how convincing our arguments may be? Not only that, how can people still be so deceived despite God the Holy Spirit, in His own power, trying to convict them? Why? Because that’s how strong the deception is.