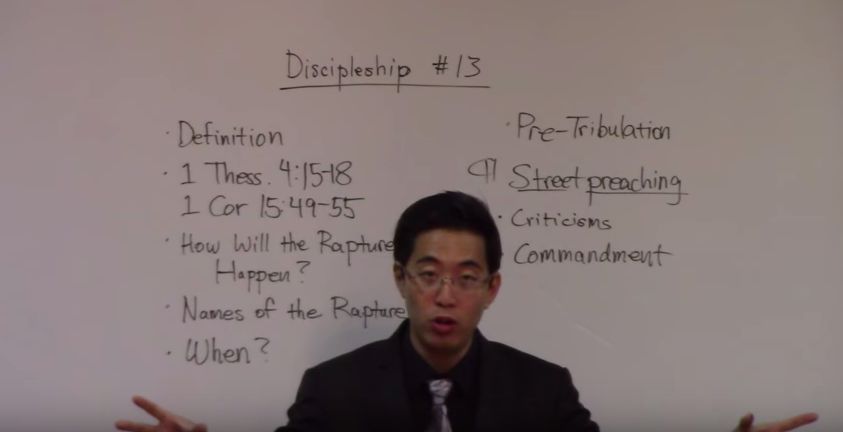 Mark 16:15 “And he said unto them, Go ye into all the world, and preach the gospel to every creature.”

2) God wants Bible believers to preach loudly to warn people about sins and their consequences.

Isaiah 58:1 “Cry aloud, spare not, lift up thy voice like a trumpet, and shew my people their transgression, and the house of Jacob their sins.”

Jeremiah 2:2 “Go and cry in the ears of Jerusalem, saying, Thus saith the LORD; I remember thee, the kindness of thy youth, the love of thine espousals, when thou wentest after me in the wilderness, in a land that was not sown.”

3) John the Baptist is a loud preacher. God uses anyone for His honor and glory, not just people in suits and ties.

Matthew 3:1-4 “In those days came John the Baptist, preaching in the wilderness of Judaea, And saying, Repent ye: for the kingdom of heaven is at hand. For this is he that was spoken of by the prophet Esaias, saying, The voice of one crying in the wilderness, Prepare ye the way of the Lord, make his paths straight. And the same John had his raiment of camel’s hair, and a leathern girdle about his loins; and his meat was locusts and wild honey.”

4) Jesus went up to a mountain to preach to a big crowd, as evidenced in Matthew 5 to 7.

Acts 2:14 “But Peter, standing up with the eleven, lifted up his voice, and said unto them, Ye men of Judaea, and all ye that dwell at Jerusalem, be this known unto you, and hearken to my words:”

6) Paul and Barnabas were street preaching to pagans.

Acts 14:6-7 “They were ware of it, and fled unto Lystra and Derbe, cities of Lycaonia, and unto the region that lieth round about: And there they preached the gospel.”

Jeremiah 11:6 “Then the LORD said unto me, Proclaim all these words in the cities of Judah, and in the streets of Jerusalem, saying, Hear ye the words of this covenant, and do them.”

8) For the people who claim that Christians have no love because they preach about hell, we can quote this verse, “Open rebuke is better than secret love.” (Proverbs 27:5)

9) Christians are supposed to preach on the good news as well. There is a balance in street preaching.

Romans 10:15 “And how shall they preach, except they be sent? as it is written, How beautiful are the feet of them that preach the gospel of peace, and bring glad tidings of good things!”

10) The Bible calls Christians as wise people when they preach out loud.

Proverbs 1:20 “Wisdom crieth without; she uttereth her voice in the streets:”

Proverbs 8:1 “Doth not wisdom cry? and understanding put forth her voice?”

The apostles were accused of street preaching in Jerusalem. In the verses below, Peter said that they are to obey God’s command to preach on the street.

Acts 5:28-29 “Saying, Did not we straitly command you that ye should not teach in this name? and, behold, ye have filled Jerusalem with your doctrine, and intend to bring this man’s blood upon us. Then Peter and the other apostles answered and said, We ought to obey God rather than men.”

The only way for the gospel to be published throughout Judea from Galilee is street preaching. The early Christians can’t do that by going door to door or preaching in churches. In verse 24, Jesus commanded them to preach. Notice that He did not use words like recommend, suggest, or encourage. It was a commandment.

Acts 10:36-39 “The word which God sent unto the children of Israel, preaching peace by Jesus Christ: (he is Lord of all:) That word, I say, ye know, which was published throughout all Judaea, and began from Galilee, after the baptism which John preached; How God anointed Jesus of Nazareth with the Holy Ghost and with power: who went about doing good, and healing all that were oppressed of the devil; for God was with him. And we are witnesses of all things which he did both in the land of the Jews, and in Jerusalem; whom they slew and hanged on a tree:”

Acts 10:42 “And he commanded us to preach unto the people, and to testify that it is he which was ordained of God to be the Judge of quick and dead.”

Matthew 11:1 “And it came to pass, when Jesus had made an end of commanding his twelve disciples, he departed thence to teach and to preach in their cities.”

Matthew 10:27 “What I tell you in darkness, that speak ye in light: and what ye hear in the ear, that preach ye upon the housetops.”

Luke 10:9 “And heal the sick that are therein, and say unto them, The kingdom of God is come nigh unto you.”

Mark 16:15 “And he said unto them, Go ye into all the world, and preach the gospel to every creature.”

Acts 1:8 “But ye shall receive power, after that the Holy Ghost is come upon you: and ye shall be witnesses unto me both in Jerusalem, and in all Judaea, and in Samaria, and unto the uttermost part of the earth.”

Jesus and His disciples always preach in cities and streets. When Jesus said to preach to the whole world, He meant exactly that. It’s not just door to door or personal witnessing. Throughout His entire ministry, it consists mainly of street preaching.

Street preaching is very effective because you can reach scores of people and tell them about the gospel.

Four inadequate excuses to not do street preaching

1) Because there were no church buildings back then, that’s why the apostles had to do street preaching. They did both publicly and house to house.

Acts 20:20 “And how I kept back nothing that was profitable unto you, but have shewed you, and have taught you publickly, and from house to house.”

Paul preached both in and outside of the synagogues.

Acts 9:20 “And straightway he preached Christ in the synagogues, that he is the Son of God.”

Acts 14:8 “And there sat a certain man at Lystra, impotent in his feet, being a cripple from his mother’s womb, who never had walked:”

Acts 5:42 “And daily in the temple, and in every house, they ceased not to teach and preach Jesus Christ.”

Acts 8:4 “Therefore they that were scattered abroad went every where preaching the word.”

2) The opponents of street preaching claim that when the Bible says “preach publicly,” the apostles held an assemble in the field/school campus to preach there. Street preaching is fanatical. The apostles were possessed with the Holy Spirit. They immediately ran out and preached to the public.

To counter that, read Acts 2.

3) Because it does not have any effect on the people. To counter that, in Acts 2:41, 3,000 souls were added due to street preaching.

4) Street preaching does not give a good image of the church. The Bible never said to skip street preaching to attract in ‘good’ or ‘rich’ crowd. Otherwise, respectable people will think that they are nutjobs.

Acts 17:4 “And some of them believed, and consorted with Paul and Silas; and of the devout Greeks a great multitude, and of the chief women not a few.”

Acts 17:12 “Therefore many of them believed; also of honourable women which were Greeks, and of men, not a few.”