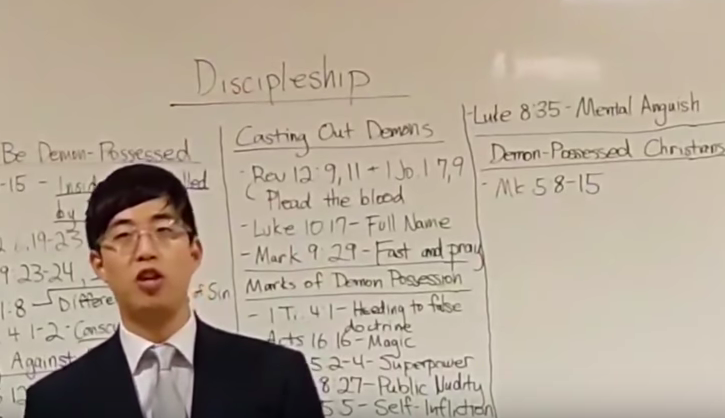 How To Be Demon-Possessed

A demon-possessed person is controlled by unclean spirits/demons/devils inside them.

Mark 5:8-15: “For he said unto him, Come out of the man, thou unclean spirit. And he asked him, What is thy name? And he answered, saying, My name is Legion: for we are many. And he besought him much that he would not send them away out of the country. Now there was there nigh unto the mountains a great herd of swine feeding. And all the devils besought him, saying, Send us into the swine, that we may enter into them. And forthwith Jesus gave them leave. And the unclean spirits went out, and entered into the swine: and the herd ran violently down a steep place into the sea, (they were about two thousand;) and were choked in the sea. And they that fed the swine fled, and told it in the city, and in the country. And they went out to see what it was that was done. And they come to Jesus, and see him that was possessed with the devil, and had the legion, sitting, and clothed, and in his right mind: and they were afraid.”

An unclean spirit starts working when the person sins.

1 Kings 22:6: “Then the king of Israel gathered the prophets together, about four hundred men, and said unto them, Shall I go against Ramothgilead to battle, or shall I forbear? And they said, Go up; for the LORD shall deliver it into the hand of the king.”
1 Kings 22:19-23: “And he said, Hear thou therefore the word of the LORD: I saw the LORD sitting on his throne, and all the host of heaven standing by him on his right hand and on his left. And the LORD said, Who shall persuade Ahab, that he may go up and fall at Ramothgilead? And one said on this manner, and another said on that manner. And there came forth a spirit, and stood before the LORD, and said, I will persuade him. And the LORD said unto him, Wherewith? And he said, I will go forth, and I will be a lying spirit in the mouth of all his prophets. And he said, Thou shalt persuade him, and prevail also: go forth, and do so. Now therefore, behold, the LORD hath put a lying spirit in the mouth of all these thy prophets, and the LORD hath spoken evil concerning thee.”

Isaiah 19:14: “The LORD hath mingled a perverse spirit in the midst thereof: and they have caused Egypt to err in every work thereof, as a drunken man staggereth in his vomit.”

When one’s conscience is seared with a hot iron, one can easily become demon-possessed.

1 Timothy 4:1-2: “Now the Spirit speaketh expressly, that in the latter times some shall depart from the faith, giving heed to seducing spirits, and doctrines of devils; Speaking lies in hypocrisy; having their conscience seared with a hot iron;”

Ephesians 6:12: “For we wrestle not against flesh and blood, but against principalities, against powers, against the rulers of the darkness of this world, against spiritual wickedness in high places.”

Man’s battle is not a physical battle. During their spiritual battle, the Bible advises them to cast down every bad thought/vain imagination. All sins begin with a thought.

2 Corinthians 10:3-5: “For though we walk in the flesh, we do not war after the flesh: (For the weapons of our warfare are not carnal, but mighty through God to the pulling down of strong holds;) Casting down imaginations, and every high thing that exalteth itself against the knowledge of God, and bringing into captivity every thought to the obedience of Christ;”

One fights the devil by resistance.

James 4:7: “Submit yourselves therefore to God. Resist the devil, and he will flee from you.”

One should not give any place to the devil.

Ephesians 4:27: “Neither give place to the devil.”

1 Timothy 4:1: “Now the Spirit speaketh expressly, that in the latter times some shall depart from the faith, giving heed to seducing spirits, and doctrines of devils;”

Magic (any “innocent” magic contains some kind of spirit)

Acts 16:16: “And it came to pass, as we went to prayer, a certain damsel possessed with a spirit of divination met us, which brought her masters much gain by soothsaying:”

Superpowers. Martial arts and self-defense are okay, but if one starts to meditate and ask some spirit to come inside them, that’s dangerous.

Mark 5:2-4: “And when he was come out of the ship, immediately there met him out of the tombs a man with an unclean spirit, Who had his dwelling among the tombs; and no man could bind him, no, not with chains: Because that he had been often bound with fetters and chains, and the chains had been plucked asunder by him, and the fetters broken in pieces: neither could any man tame him.”

Luke 8:27: “And when he went forth to land, there met him out of the city a certain man, which had devils long time, and ware no clothes, neither abode in any house, but in the tombs.”

Mark 5:5: “And always, night and day, he was in the mountains, and in the tombs, crying, and cutting himself with stones.”

Luke 9:39: “And, lo, a spirit taketh him, and he suddenly crieth out; and it teareth him that he foameth again, and bruising him hardly departeth from him.”

1 Corinthians 14:23: “If therefore the whole church be come together into one place, and all speak with tongues, and there come in those that are unlearned, or unbelievers, will they not say that ye are mad?”
1 Corinthians 14:27: “If any man speak in an unknown tongue, let it be by two, or at the most by three, and that by course; and let one interpret.”
1 Corinthians 14:33: “For God is not the author of confusion, but of peace, as in all churches of the saints.”

Luke 8:35: “Then they went out to see what was done; and came to Jesus, and found the man, out of whom the devils were departed, sitting at the feet of Jesus, clothed, and in his right mind: and they were afraid.”

All sins/demon possessions start in the mind.

A demon is inside a man.

Mark 5:8: “For he said unto him, Come out of the man, thou unclean spirit.”
Mark 5:12: “And all the devils besought him, saying, Send us into the swine, that we may enter into them.”

Satan was inside a saved Christian’s heart.

Acts 4:32: “And the multitude of them that believed were of one heart and of one soul: neither said any of them that ought of the things which he possessed was his own; but they had all things common.”

Acts 5:1-3: “But a certain man named Ananias, with Sapphira his wife, sold a possession, And kept back part of the price, his wife also being privy to it, and brought a certain part, and laid it at the apostles’ feet. But Peter said, Ananias, why hath Satan filled thine heart to lie to the Holy Ghost, and to keep back part of the price of the land?”

Paul is telling saved Christians not to give a place to the devil to live inside of them. If Paul doesn’t believe in demon possession, then why would he say that?

Ephesians 4:27: “Neither give place to the devil.”

Satan was inside a chief Christian, Peter.

Matthew 16:23: “But he turned, and said unto Peter, Get thee behind me, Satan: thou art an offence unto me: for thou savourest not the things that be of God, but those that be of men.”

A saved church member’s body was turned over to Satan because he slept with his father’s wife.

1 Corinthians 5:1: “It is reported commonly that there is fornication among you, and such fornication as is not so much as named among the Gentiles, that one should have his father’s wife.”
1 Corinthians 5:5: “To deliver such an one unto Satan for the destruction of the flesh, that the spirit may be saved in the day of the Lord Jesus.”
1 Corinthians 5:11: “But now I have written unto you not to keep company, if any man that is called a brother be a fornicator, or covetous, or an idolator, or a railer, or a drunkard, or an extortioner; with such an one no not to eat.”

Two Christians renounced their faith and as a result, they were turned over to Satan.

1 Timothy 1:19-20: “Holding faith, and a good conscience; which some having put away concerning faith have made shipwreck: Of whom is Hymenaeus and Alexander; whom I have delivered unto Satan, that they may learn not to blaspheme.”