Exposing the REAL Synagogue of Satan (Rev. 2:9b) 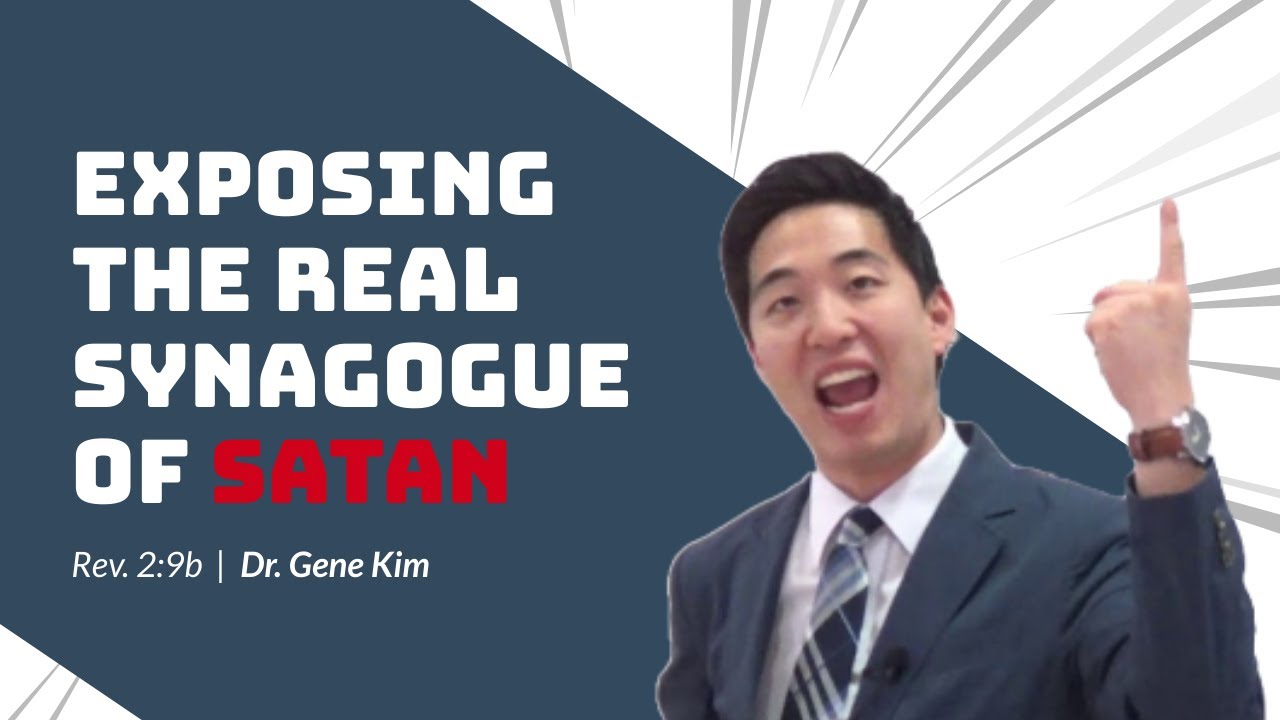 Revelation 2:9 “I know thy works, and tribulation, and poverty, (but thou art rich) and I know the blasphemy of them which say they are Jews, and are not, but are the synagogue of Satan.”

In verse 9, we debunked 2 essential heresies here, they are very prevalent especially online. These are the two worst doctrines ever among dispensationalism. The first one is the post-tribulation doctrine, and the second one is called replacement theology.

This passage is a famous passage used by replacement theology.

During that timeline, everyone was busy running for their lives. But the more they killed and persecuted Christians, the more Christianity grew. Shamefully, they do a lot better than dispensational bible-believing Christians who have all the truth, we should know better and do better than these people. Read Foxes’ Book of Martyrs. In the book, it records that when Christians were being killed and persecuted amongst this bloodthirsty mob that was shouting for blood, one of the pagans got up and said ‘Great is the God of the Christians!’. They killed them too after that.

It’s very interesting that was pagan Rome at that time, modern Rome has not changed. Rome has always retained its power, it just changed in different forms.

So AD 200 to 325 was the timeline of the church being under severe persecution and Bible believers were persecuted for the name of Jesus Christ. Some of these church fathers were stuck at home, like theological scholars, and because of that, education and intellect became the final authority. That’s how the Catholic church eventually seeped in. It’s when the word of God started to lose its authority and instead, intellect and higher education became the final authority.

We all promote higher education. Sure, knowing a lot more is good but people are wicked at heart and once they know all the information, they will tend to use knowledge to what benefits them. People are not as innocent as you might think, in some way or form, we want to be right when we argue. The dangerous thing is that when you think you’re smart enough, that’s when God quits using you, because you start to correct your Bible rather than the Bible correcting you. You correct what the verse says rather than letting the verse freely speak to you and convicting you.

For some reason, people think that Israel means the church and church means Israel. No. That’s common sense, you don’t need to know the Bible to know that. The reason why they promote replacement theology is that they want the church to replace the promises that God has given to the Jews, to the nation of Israel. So they want to replace those promises with themselves.

Not only that, because there are so many verses in the Bible that have a Jewish application, when these guys get smarter in education, they want to forcibly apply the verse to themselves. In order to do that, you have to be very ‘intellectual’ and ‘smart’ to do it, so the best way is to say it this way ‘All of God’s believers are real children of God. They are real spiritual Jews’. That’s the intellectual way of getting around it.

That’s the problem with today’s Calvinists and intellectual scholars, they all sit at home and they weren’t evangelists. The way they witness is debating, but how many souls do they get saved out of that? Do you know what we’re doing to get soul saved?

In every church age, this higher education system is really dangerous. That’s when they became the final authority, not God. That’s the purpose of higher education, building your intellect where finally think you’re smarter than God.

“and I know the blasphemy of them which say they are Jews, and are not, “

There’s a blasphemy going around, people saying that ‘I’m a Jew’ but they’re not Jews.

“but are the synagogue of Satan.”

Replacement theology teaches that Revelation 2:9 is referring to the nation of modern-day Israel today. You’ll hear that all over online on ‘fake Jews’.

We already know that Satan has dominion over Hollywood, the bank system, the elites, the modern nation of Israel, Rothschilds, all that kind of stuff, but you got to realize that Judas Iscariot is a Jew that the Lord chose and Judas Iscariot is going to be the Antichrist incarnate. So it doesn’t matter how wicked or evil these people are, that doesn’t get them away from being a Jew. These people are one of God’s chosen people but they are so wicked. However as a nation physically, they are God’s chosen people, that’s the nation the Lord chose as His people. Spiritually, they are not. They’re lost and they’re going to hell.

If there is a Jew today who is lost, unsaved, and complete left-wing liberal and even mocks Jesus Christ, are we saying that the person is a child of God? No, he is a child of the devil spiritually. As a spiritual nation/people, that’s where you see them as fake Jews, they are not real spiritual Jews. But physically, as a people, they can’t deny where they come from, they’re born from Abraham’s seed. Spiritually they are children of the devil. They are God’s chosen people, chosen nation physically, but as a chosen people, chosen nation spiritually, they are not.

Romans 11:28 “As concerning the gospel, they are enemies for your sakes: but as touching the election, they are beloved for the fathers’ sakes.”

Because of what God promised Abraham, Isaac, and Jacob that their nation will rule over all the earth, etc, God cannot break that promise. Neither can God break His promise to an individual who is not a physical Jews, that whosoever shall call upon the name of the Lord shall be saved. They don’t see two promises here, they mingle all promises as one. Some educated snob thinks he’s smarter than the Bible, smarter than God, that he can brilliantly combine two things and mingle it as one. You’re of the devil and you’re a fake Jew.

Let’s look back at the main text:

“I know the blasphemy of them which say they are Jews, and are not, but are the synagogue of Satan.”

These are people who claim they are Jews and are not. The Jews, people of Israel, are flesh and blood, their existence and being as Jews. The replacement theology guys are not Jews. How many people you see on the internet saying ‘I’m a real Jew’ and yet there is no real Jew from them, they have no relationship to Abraham, Isaac, and Jacob whatsoever in their physical bloodline.

Their favorite line is the last part of verse 9, ‘but are the synagogue of Satan.‘. They say ‘Which is the only group of people who have synagogues? Jews. So this is referring to the nation of Israel’.

Notice how contradictory this is. ‘I know the blasphemy of them which say they are Jews, and are not,‘ Replacement theology switch this as a ‘real SPIRITUAL Jew’, that’s why they want to call the small nation of Israel fake Jews spiritually. So they’re going to try to make this spiritual. If you want to make this context spiritual, look at the next part: ‘but are the synagogue of Satan‘. Now they switch that as literal. See that?

Who are God’s own Jews throughout the Bible? God’s literal physical nation of Israel.
Who are Satan’s Jews? It’s funny when Jehovah Witnesses, the black Hebrew Israelites, some Indonesian, some Chinese say, some white guy comes forth and say ‘I’m a real Jew’, they’re not a real Jew from Abraham. They are more accurate to be Satan’s Jews, Satan’s synagogue.

There are some Bible-believing preachers who even say that this is referring to physical Jews today, who brag themselves that ‘I’m a physical seed of Abraham, Isaac and Jacob’ but they’re actually a child of the devil. That can work but that does not teach replacement theology. Spiritually they’re children of Satan. That’s what John 8 points out, but that doesn’t erase them physically.

John 8:39-40 “They answered and said unto him, Abraham is our father. Jesus saith unto them, If ye were Abraham’s children, ye would do the works of Abraham. But now ye seek to kill me, a man that hath told you the truth, which I have heard of God: this did not Abraham.“

John 8:44 “Ye are of your father the devil, and the lusts of your father ye will do. He was a murderer from the beginning, and abode not in the truth, because there is no truth in him. When he speaketh a lie, he speaketh of his own: for he is a liar, and the father of it.”

It can make sense that a Jew’s saying ‘Hey I’m a Jew, I’m a child of Abraham’ but God calls him a child of the devil.
But did Jesus erase their physical lineage? No. They skipped verse 37.

John 8:37 “I know that ye are Abraham’s seed; but ye seek to kill me, because my word hath no place in you.”

This is how you can debunk replacement theology with Revelation 2:9. That is their favorite passage they will always quote. When they do that, get ready to use these arguments on them.