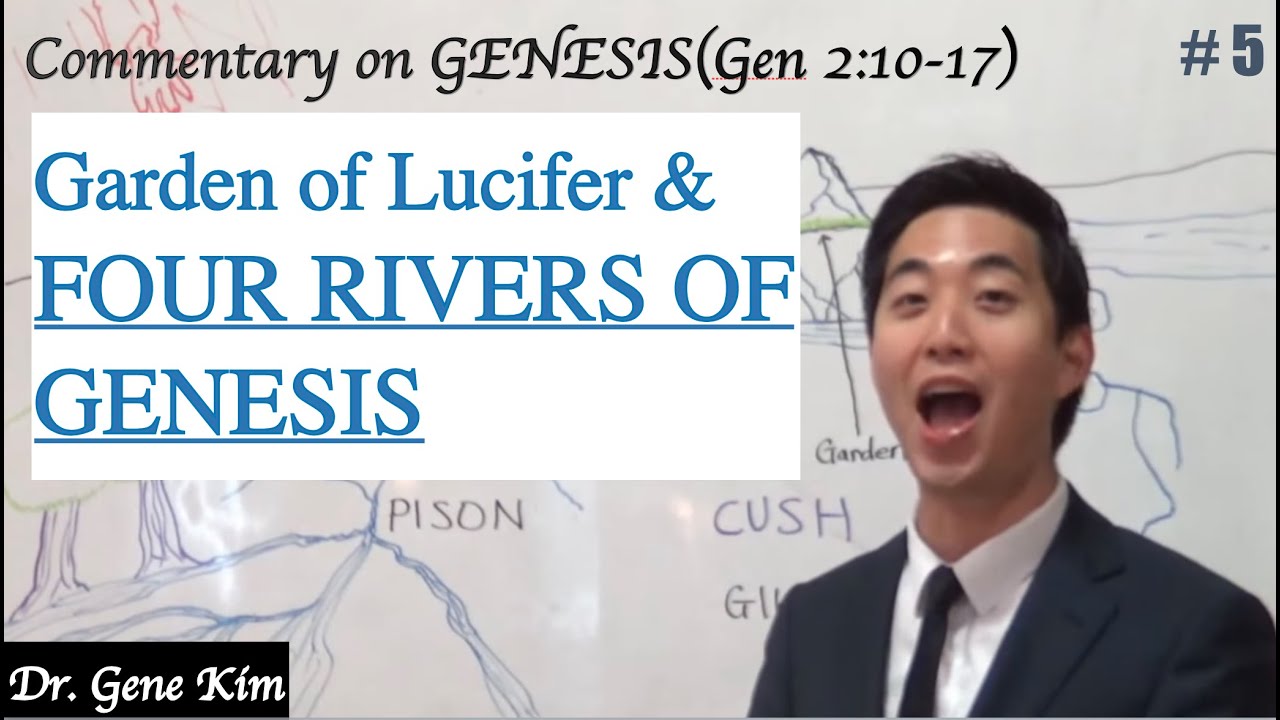 Genesis 2:10-17: “And a river went out of Eden to water the garden; and from thence it was parted, and became into four heads. The name of the first is Pison: that is it which compasseth the whole land of Havilah, where there is gold; And the gold of that land is good: there is bdellium and the onyx stone. And the name of the second river is Gihon: the same is it that compasseth the whole land of Ethiopia. And the name of the third river is Hiddekel: that is it which goeth toward the east of Assyria. And the fourth river is Euphrates. And the LORD God took the man, and put him into the garden of Eden to dress it and to keep it. And the LORD God commanded the man, saying, Of every tree of the garden thou mayest freely eat: But of the tree of the knowledge of good and evil, thou shalt not eat of it: for in the day that thou eatest thereof thou shalt surely die.”

Some Bible believers think that they were intertwined together, so Adam and Eve could not tell the difference. We don’t know for sure, so let’s say that they’re together in the midst of the garden.

The following are theories that Pastor Kim has:

These are all theories. Why give theories? If there is something unsure in the Bible, it is our job to explore all areas. It is important not to teach something unsure like it is certain. Doing that causes more division in the church.

In Genesis 2:9, we see that the tree of knowledge of good and evil is in the midst of the garden. The garden is coming from out of the river. We are going to combine verse 10, 11, and 12 with Ezekiel 31 later. Let’s culminate all this together.

Verse 10, “and a river went out of Eden to water the garden.” Now, remember that Eden could be a mountain. If that is the case, look how it matches. A river goes out of Eden and waters this garden. The Bible says, “and from thence it was parted.” After it goes to the garden of Eden, it slits into four rivers. What are these four rivers? The Bible says in verse 10, “and became four heads.” Remember that. If you search this area on the Persian Gulf, you will see Tigress and Euphrates rivers, and two rivers are missing.

The name of the first river is Pison. That is it which compasseth the whole land of Havilah where there is gold. Whatever this land is, it was called Havilah. Havilah means anguish. It was not like the third world civilization as you might picture it today. Africa was one of the richest areas that the entirety of Europe had to depend upon during Moses’ time. Why is that? It is because there was so much gold there. You might notice Africa is closely located to this Persian Gulf region. Remember that Egypt was very prosperous, it was the most prosperous civilization in the world. Egypt is the land between the rest of Africa and the Persian Gulf.

The second river is Gihon. It hits towards the land of Ethiopia (the lower part of the Persian map).

The fourth river is Euphrates. So, there are four rivers here. If these theories are true that we have looked at so far, then the following might make sense.

Theory 1: The four rivers came out from Eden, a mountain

The rivers must come out of Eden, but Eden is no more. If the Lord got rid of this mountain and these rivers seemed to come out of it. It’s similar to Sodom and Gomorrah about the dead sea. What happened to that location?

A few years ago, they discovered through technology that there used to be these two water beds that do not exist anymore. These desert terrains today used to be wetter. When God talks about the land of Canaan, it was a land flowing with milk and honey. When we go there today, we see a desert. That is why God comes down in the millennium at the dessert where the Jews are at. He will water it. The Lord will restore the earth to its natural beautiful environment. So, these two rivers once existed but dried out a long time ago.

Now, if there is one area that seems to be contradictory, it would probably be Gihon at verse 13. Gihon is supposed to compass Ethiopia. When you look at Gihon, it just hits toward the Red Sea, but Ethiopia is further south.

Possibility B) It is common knowledge that when there’s a particular land like France, the current land borders are not the same as it was for a few hundred years ago. Imagine going back 4,000 years. It is possible that Ethiopia was much larger back then.

Theory 2: The land was covered with gold and Adam was made from the minerals (containing gold)

1 Peter 1:7: “That the trial of your faith, being much more precious than of gold that perisheth, though it be tried with fire, might be found unto praise and honour and glory at the appearing of Jesus Christ:”

1 Corinthians 15:47: “The first man is of the earth, earthy: the second man is the Lord from heaven.”

What is this resurrected body we are going to have?

Remember the context this time is about the heavenly image. Notice that the heavenly image has a glow. Then, Adam’s image before the fall, had a glow. If we go back, Adam came from a land of gold. He had like a golden image and that’s something Hollywood stars love to have.

Psalms 139:14: “I will praise thee; for I am fearfully and wonderfully made: marvellous are thy works; and that my soul knoweth right well.”

This is talking about mankind’s creation. It is not talking about the womb of the mother, but the womb of the earth. That is why people talk about mother earth. The idea is that we come from her originally. We are familiar with that there is a new age reference to that, which is why we Christians do not use the phrase mother earth. New agers will spiritualize it, but we Christians mean mother in the sense that minerals and resources from the earth which the Lord used to create us. Look at Psalms 139:15, we see the womb is from the earth.

Psalms 139:15: “My substance was not hid from thee, when I was made in secret, and curiously wrought in the lowest parts of the earth.”

It is indicating that when we were made, it was something secret and spectacular. If you look at the last part of verse 15, there is a special location. If you go down and dig deeper into the ground, you will find something people have been attempting to find for thousands of years: gold and rich minerals.

Genesis 2:15: “And the LORD God took the man, and put him into the garden of Eden to dress it and to keep it.”

Ezekiel 28:13: “Thou hast been in Eden the garden of God; every precious stone was thy covering, the sardius, topaz, and the diamond, the beryl, the onyx, and the jasper, the sapphire, the emerald, and the carbuncle, and gold: the workmanship of thy tabrets and of thy pipes was prepared in thee in the day that thou wast created.”

These elements were Lucifer’s covering from Eden. Lucifer was covered with gold. This gives credence to what was mentioned earlier that Adam was covered with gold. That can also make way more sense why mankind has a similarity with angelic beings. If you are a saved child of God, you are called a son of God. Angelic beings were called sons of God. See the similar wording. Jesus also mentioned we would be like the angels of heaven when we go up to heaven. Then it makes sense that Lucifer has jealousy and hate towards us because he was close with God being the anointed cherub that covered the throne of God. God rejected him and loved and accepted man, so there must be a lot of hate and anger from Satan towards man.

Theory 3: Eden was a part of Lucifer

Ezekiel 28:13 says that Lucifer has been in the garden of Eden, but it said every precious stone is his covering (we assume these stones are from Eden). Science eventually can show how a land relates to a person. When studying the Bible, it is interesting how celestial heavenly beings and sometimes God Himself, would take an object to be connected to their presence or identity. The idea is that Eden becomes a part of Lucifer. If that is the case that Eden has a part of Lucifer, then could we also say that for the tree of knowledge of good and evil?

Look at Ezekiel 31 how it is similar to the same description as the person at Ezekiel 28, Lucifer. Ezekiel 31:8-9b talks about the tree of knowledge of good and evil. We see that the tree of knowledge of good and evil is attributed with the same language as Satan at Ezekiel 28. So we see the tree is connected to Satan too. We will find out a little later in Genesis 3 that when Eve partook of the fruit, there was a little bit of a sexual language that the Lord used in Genesis 3 and 2 Corinthians 11.

Please keep in mind that all these are theories. When it comes to abstract things, we have to dig deep to find more clarity in the scriptures. Now, let’s continue in verse by verse study, from verse 15 and onwards.

Genesis 2:15: “And the LORD God took the man, and put him into the garden of Eden to dress it and to keep it.”

We see from this verse that Adam took care of the garden. It was his job.

Genesis 2:16: “And the LORD God commanded the man, saying, Of every tree of the garden thou mayest freely eat:”

In verse 16, we see that God gave Adam a command. He tells him that he can eat of every tree in the garden freely.

Genesis 2:17: “But of the tree of the knowledge of good and evil, thou shalt not eat of it: for in the day that thou eatest thereof thou shalt surely die.”

The tree of knowledge of good and evil was the only tree that was the exception. God says “you will surely die.” This is where atheist professors will say that we did not die because we are still alive. But they do not understand what is meant with death. Look at Ephesians for answers.

Ephesians 2:1: “And you hath he quickened, who were dead in trespasses and sins;”

Quickened means to make alive. Why were you made alive? Dead in what? Trespasses and sins. When you were dead in your sins, that’s a spiritual nature. Notice when you read verses 2 and 3, it is not physical, it is not bodily, it is spiritual. Spiritually, you will die from eating of the tree of knowledge of good and evil. The atheist will disagree and say, “No, their eyes were opened, they started to know what is right and wrong.” That is stupidity. They might know a little more about sin but were in their previous state innocent. They were kind of like children. God wanted to keep them pure and not be familiar with evil.

What we can learn from this is when God says, “surely,” believe it, fear the Lord, and don’t let someone put doubt in His words.