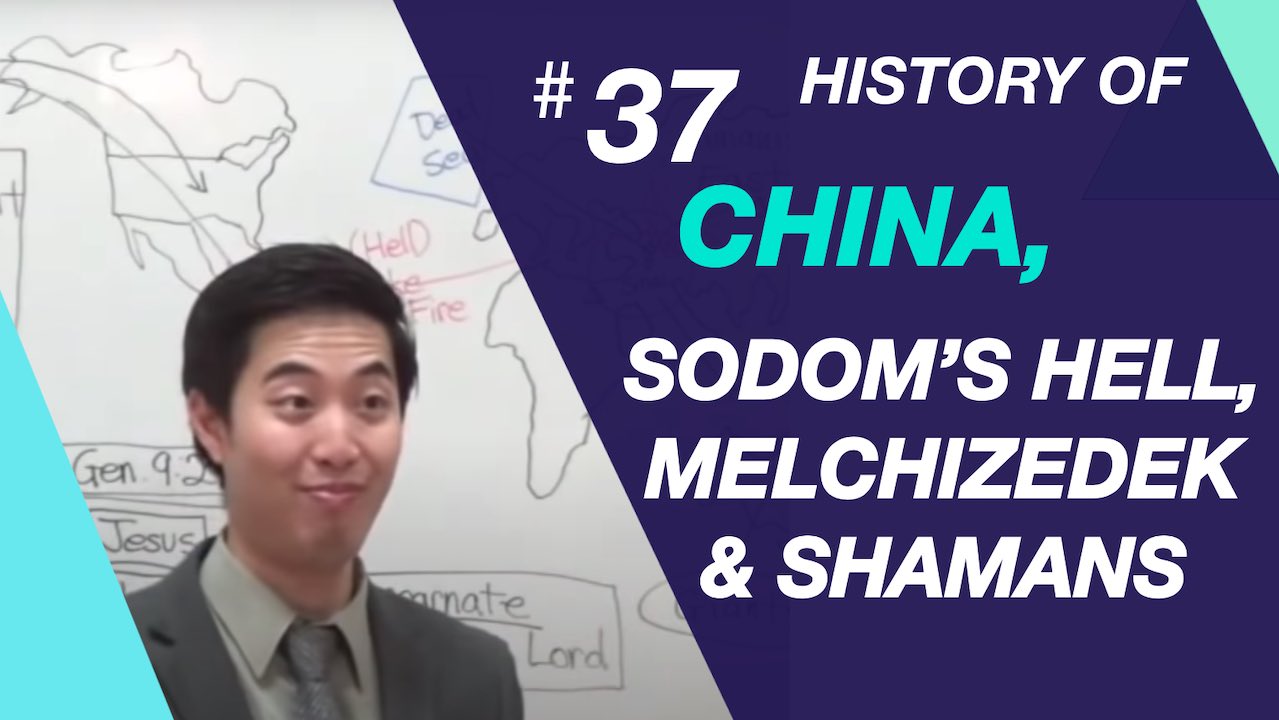 For this lesson, as well as nearly every other class, we will use a map called the World History Chart. It can be ordered from www.amazingbibletimeline.com. The map is necessary to understand the chronology we will cover, but since it is not made by Bible Believers, there are some mistakes in the map that we will point out. The map outlines the genealogy of Adam to Cain very well, but its account of Noah and his three sons, Shem, Ham, and Japheth is not completely accurate.

The East, the Orient, and China

Joktan went toward the east (Genesis 10:30). It is also mentioned that “God shall enlarge Japheth, and he shall dwell in the tents of Shem” (Genesis 9:27). Many put too much emphasis on the first part of the verse and claim that Japheth’s people inhabited a large portion of land, which we disagree with. Colonization as the interpretation of the verse makes more sense as it reconciles the second part of “(dwelling) in the tents of Shem”. Studies and genetic data show a spread of people from the region near the Tower of Babel towards the East and to the Americas.

Scholars have also attempted to use etymological tracing to show how the Chinese came from Ham. This is standard teaching among creationists. We believe it is only biblically half-true and that Shem played a part as well.

Joktan’s people, who some believe resided in the Arabic region, could have spread further East as data suggests, and the Chinese and Arabs probably intermingled as they did so. Biblical hermeneutics treats “the East” as referring to “the Orient”. However, we do not completely agree that the Arabs came only from Joktan and can see how they originated from Ham instead: Sheba and Sabtah refer to Arabia, while Raamah to southeast Arabia (Genesis 10:6). The three were from Ham. Muslims claim that Ishmael was their forefather; Ishmael’s mother was an Egyptian from Ham’s line. Scholars agree that Egypt is from Ham’s line. Psalms further support this by mentioning that the children of Israel went out of the land of Ham, which is Egypt (Psalms 105:23). Hence we believe the Arabic people are a mix of Shem and Ham’s lines as the product of intermingling, and that subsequent intermingling of Arabs and Chinese made Shem a progenitor of the Chinese people.

Creationists push a strong case regarding the Chinese/Asians that they could have come from Ham. They believe that Sin and Heth, both begotten from Ham, are the most likely ancestors of the Chinese:

The place most closely associated by the Chinese themselves with the origin of their civilization is the capital of Shensi, namely, Siang-fu (Father Sin). Siang-fu appears in Assyrian records as Sianu. Today, Siang-fu can be loosely translated, ‘Peace to the Western Capital of China’…  Sin himself was the third generation from Noah, a circumstance which would provide the right time interval for the formation of early Chinese culture…

…Furthermore, those who came from the Far East to trade were called Sinæ (Sin) by the Scythians. Ptolemy, a Greek astronomer, referred to China as the land of Sinim or Sinæ. Reference to the Sinim in Isaiah 49:12 notes they came “from afar,” specifically not from the north and not from the west… For the Sinæ, the most important town was Thinæ, a great trading emporium in western China. The city Thinæ is now known as Thsin or simply Tin, and it lies in the province of Shensi. Much of China was ruled by the Sino-Khitan Empire (960-1126 A.D.), which Beijing became the southern capital…

…The Greek word for China is Kina (Latin is Sina). As well, Chinese and surrouding languages are part of the Sino-Tibetan language family… Years ago, American newspapers regularly carried headlines with reference to the conflict between the Chinese and Japanese in which the ancient name reappeared in its original form, the Sino-Japanese war. Sinology refers to the study of Chinese history…

…With respect to the Cathay people of historical reference, it would make sense to suppose that the remnants of the Hittites, after the destruction of their empire, traveled towards the east and settled among the Sinites who were relatives… Still others migrated throughout the region and beyond, making up present-day Mongoloid races in Asia and the Americas. The evidence strongly suggests that Ham’s grandsons, Heth (Hittites/Cathay) and Sin (Sinites/China), are the ancestors of the Mongoloid peoples…

Owing to the close proximity of Arabia (of Shem and Ham) to Sinai (of Ham), they commingled, and China was created from their mixture.

Shamanism was created in Siberia and carried to Korea in the BCs, who in turn brought it to the Americas, which explains why Native Americans practice shamanism. Shamanism was from Shem’s line.

Note how the pyramids in Egypt have parallel structures throughout the Orient and South America even further east. As for the creation of pyramids, it was unfeasible for the people of old to build it themselves; either the Sons of God created them directly or gave the people special knowledge. (Some Bible-believers teach that the pyramids were built through shamanism.)

Therefore, accounting for the statement that “Japheth dwelt in the tents of Shem”, we believe Asians descended from Shem.

Melchizedek and his Identity

There are two points regarding Melchizedek which debunks hyper-dispensationalism. The Lord’s supper was practiced even before the Mosaic law, and tithing as well. (Genesis 14:18-20) People gave to the Lord throughout every dispensation.

As for his identity, many believe Melchizedek to be Jesus Christ. Ruckman leans toward him being Shem. We are on the fence as we see strong points on both sides.

Shem was still alive when Sarai died. Referring to Nimrod and the ancient 5 kingdoms’ timeline, the Semites (Shem) were doing battle against Satan’s people. According to mythologists and archaeologists, Shem was the one who killed Nimrod. Hence we can refer to Shem’s people as God’s people. As Shem’s group grew they were bound to institute priests and religious leaders. Melchizedek, as both King and Priest, can thus be Shem. Paying attention to Genesis 14:19 and Genesis 9:26, “blessed be the Lord God of Shem”, especially the similarity of both wordings, Shem’s God is implied to be the correct Hebrew God.

As for the case for him being Jesus Christ, Melchizedek is mentioned to be without descent. (Hebrews 7:3). (Hebrews 5:5-6, Hebrews 6:20-7:3 associates Jesus with Melchizedek.)

However, it does not make sense, if he were Jesus, to say he is “made like unto the Son of God” as though they were separate people. Others may then theorize Melchizedek to be a pre-incarnate form of Jesus as an angel of the Lord. God indeed came to Abraham as “the angel of the Lord”. (Genesis 22:11-15).

We have nothing against those who believe Melchizedek to be Jesus but we caution them to not overlook the possibility of him being Shem.

The people of Sodom descended from Ham. (Genesis 10:19) They are infamous for being homosexuals and for committing the sin of sodomy. The word “sodomy” also came from the city name “Sodom”. Some preachers mention their main sin being an abundance of idleness (Ezekiel 16:49) instead. They are correct. Their idleness will have led to wicked ideation and homosexuality.

The word “know” refers to intercourse. The men of Sodom wanted to sodomize the angels who were with Lot. This is reinforced by Lot offering his virgin daughters to them to leave the angels be. (Genesis 19:4-8). Hence they were sexual perverts.

Those in Sodom and Gomorrah were following the sons of God in performing strange sexual actions. (Jude 1:6-7) They also went for “strange flesh”. The word “strange” means “other/another”. “Flesh” in the Bible refers to man. As for “strange flesh”, Corinthians 15 makes the distinction between the flesh of humans and the flesh of animals. Hence Sodomites were also committing bestiality. The Law of Moses noted how Canaanites were having sex with animals. Considering they were all descendants of Ham, it follows that they learned their perversions from him, and Ham’s sin against Noah was a sexual sin.

Sodom and Gomorrah suffered the vengeance of eternal fire and rained with fire and brimstone. (Genesis 19:24) “Fire and brimstone” refers to hell in the Bible (Revelation 21:8). Thus their judgment was hellfire and not regular fire.

It is interesting to note that the region surrounding Sodom and Gomorrah is associated with strange paranormal demonic activity. It may have been the case that hell opened up from below as well under the cities. It makes sense that they were on a volcano that spurted lava upwards, causing sulfur to rain from below. We know that lava comes from hell, and hell is the center of the earth. Around the dead sea region today, we will see salt and sulfur everywhere. The sea mentioned in Revelation 20:13 may also be the Dead Sea, and this sea may be physically near hell.