Intermediate Discipleship Class 6 : What the Bible Says About Catholicism 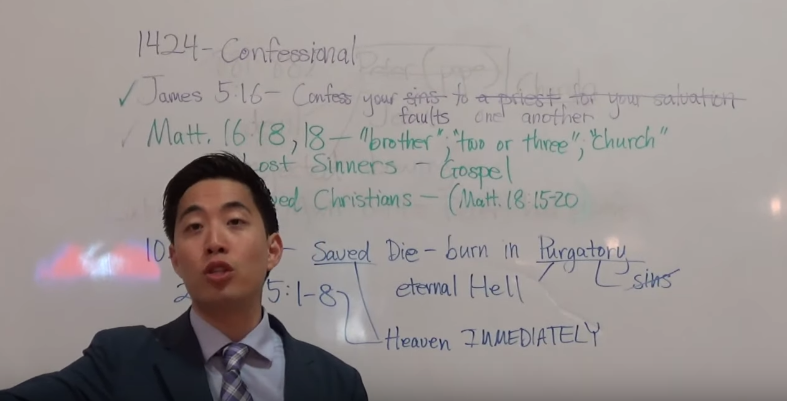 Catholics teach that Simon Peter is the first pope, and because of that, it was assumed that the church is naturally founded upon the Popes, thus they are our final authority.

Real Bible believers disagree on that, we believe Jesus Christ is the foundation of the church, not Peter.

Matthew 16:23 “But he turned, and said unto Peter, Get thee behind me, Satan: thou art an offence unto me: for thou savourest not the things that be of God, but those that be of men.”

10 verses ago, Jesus was saying that the church was built upon Peter and then 10 verses later, Jesus says “Get thee behind me, Satan”? From the scripture, we believe Peter could be used by the devil and the devil could be the founder of the Church. This explains why in the dark ages, there are so many Popes who abuse their power, living lavish lifestyles, commit adultery, fornication, and all kinds of sinful acts, and misleading millions of blinded followers.

Acts 10:25-26 “And as Peter was coming in, Cornelius met him, and fell down at his feet, and worshipped him. But Peter took him up, saying, Stand up; I myself also am a man.”

Peter rejected people bowing down to him, so it is believed that he must have denied his identity as a pope, or he simply did not live up to the expectation of a pope.

Matthew 8:14 And when Jesus was come into Peter’s house, he saw his wife’s mother laid, and sick of a fever.

Luke 4:38 “And he arose out of the synagogue, and entered into Simon’s house. And Simon’s wife’s mother was taken with a great fever; and they besought him for her.”

Peter had a wife and a mother-in-law, which meant that he was married. A pope today is not supposed to be married. These are clear proofs to debunk Peter as the first pope.

Catholics believe that when the saved die, they will be placed in purgatory, a temporary burning place. Once this purgatory expels their sins, they will be clean enough to enter heaven.

Matthew 3:10-11 “And now also the axe is laid unto the root of the trees: therefore every tree which bringeth not forth good fruit is hewn down, and cast into the fire. I indeed baptize you with water unto repentance: but he that cometh after me is mightier than I, whose shoes I am not worthy to bear: he shall baptize you with the Holy Ghost, and with fire:”

Purgatory is mentioned in the Bible too, but it literally means eternal hellfire as in ‘unquenchable hellfire’ (Matthew 3:12), unlike the temporary burning place mentioned in Catholicism.

For the saved ones, as soon as we leave this earth, we will immediately be together with the Lord again up in heaven. Purgatory is not once mentioned in the above passage.

Hebrews 9:14 “How much more shall the blood of Christ, who through the eternal Spirit offered himself without spot to God, purge your conscience from dead works to serve the living God?”

It clearly states purging here is from ‘dead works’. We are cleansed by the blood of Christ Jesus, it has nothing to do with works.

Another issue with Catholicism is concerning the confession of sin to its religious leaders.

“It is called the sacrament of confession, since the disclosure or confession of sins to a priest is an essential element of this sacrament. In a profound sense it is also a “confession” – acknowledgment and praise – of the holiness of God and of his mercy toward sinful man.

It is called the sacrament of forgiveness, since by the priest’s sacramental absolution God grants the penitent “pardon and peace.”

It is called the sacrament of Reconciliation, because it imparts to the sinner the live of God who reconciles: “Be reconciled to God.”7 He who lives by God’s merciful love is ready to respond to the Lord’s call: “Go; first be reconciled to your brother.”

Matthew 16:18-19 “And I say also unto thee, That thou art Peter, and upon this rock I will build my church; and the gates of hell shall not prevail against it. And I will give unto thee the keys of the kingdom of heaven: and whatsoever thou shalt bind on earth shall be bound in heaven: and whatsoever thou shalt loose on earth shall be loosed in heaven.”

This is pure wickedness at its finest, where people are terrified at the power of man, instead of the fear of the Lord. Nonetheless, the contradicting part is that Catholicism exhibits such leniency, that even some of the Popes actually can accept homosexuality. It is an issue if Catholics would allow themselves to confess theirs sins to religious leaders like that.

The passage above shows us that the sins are with us, we do not need to confess them to others.

James 5:16 “Confess your faults one to another, and pray one for another, that ye may be healed.”

Some Catholics may use this to prove that faults are referring to sins. However, this is actually an opportunity Lord has provided us, which is why churches stress so much on empathy and forgiving others.

Matthew 18:15-18 Moreover if thy brother shall trespass against thee, go and tell him his fault between thee and him alone: if he shall hear thee, thou hast gained thy brother. But if he will not hear thee, then take with thee one or two more, that in the mouth of two or three witnesses every word may be established. And if he shall neglect to hear them, tell it unto the church: but if he neglect to hear the church, let him be unto thee as an heathen man and a publican. Verily I say unto you, Whatsoever ye shall bind on earth shall be bound in heaven: and whatsoever ye shall loose on earth shall be loosed in heaven.

Jesus continued to talk about the issue of ‘binding and loosing’ in Matthew 18. This has to actually do with the church, not religious leaders. It also is consistent with James 5. It’s about confessing faults.

What happens to the sins of a person who is not forgiven? The sins are retained for judgment later on.

Acts 13:38 Be it known unto you therefore, men and brethren, that through this man is preached unto you the forgiveness of sins:

2 Corinthians 5:18-19 And all things are of God, who hath reconciled us to himself by Jesus Christ, and hath given to us the ministry of reconciliation; To wit, that God was in Christ, reconciling the world unto himself, not imputing their trespasses unto them; and hath committed unto us the word of reconciliation. Now then we are ambassadors for Christ, as though God did beseech you by us: we pray you in Christ’s stead, be ye reconciled to God.

God has given us the ministry of reconciliation, so do not take it lightly. Keep winning souls!

If lost sinners reject the gospel, their sins shall be unforgiven and retained.

Revelation 20: 11-15 And I saw a great white throne, and him that sat on it, from whose face the earth and the heaven fled away; and there was found no place for them. And I saw the dead, small and great, stand before God; and the books were opened: and another book was opened, which is the book of life: and the dead were judged out of those things which were written in the books, according to their works. And the sea gave up the dead which were in it; and death and hell delivered up the dead which were in them: and they were judged every man according to their works. And death and hell were cast into the lake of fire. This is the second death.And whosoever was not found written in the book of life was cast into the lake of fire.

All the sins of the unbelievers are retained, not forgiven by the Lord Jesus Christ. They will get judged at the Great White Throne judgment.

What about the Christians? Aren’t we forgiven? Why are our sins retained?

When God forgives us, He also wants us to forgive the other party and reconcile.

2 Corinthians 2:10-11 “To whom ye forgive any thing, I forgive also: for if I forgave any thing, to whom I forgave it, for your sakes forgave I it in the person of Christ; Lest Satan should get an advantage of us: for we are not ignorant of his devices.”

Paul was able to forgive because Christ forgave them as well. God truly wants us to repent of our sins, and reconcile with others. There is power in forgiveness; never let bitterness, anger, resentment and jealousy get the better of us.

Ephesians 4:30-32 And grieve not the holy Spirit of God, whereby ye are sealed unto the day of redemption. Let all bitterness, and wrath, and anger, and clamour, and evil speaking, be put away from you, with all malice: And be ye kind one to another, tenderhearted, forgiving one another, even as God for Christ’s sake hath forgiven you.

Forgive the sins of a fellow saved Christian as God has also forgiven us.

As a saved Christian, why does God retain our sins? That’s because God still judges the sins that are committed in the body. That’s why we as Christians face the terror of the Lord at the judgment seat of Christ.

2 Corinthians 5:10-11 For we must all appear before the judgment seat of Christ; that every one may receive the things done in his body, according to that he hath done, whether it be good or bad. Knowing therefore the terror of the Lord, we persuade men; but we are made manifest unto God; and I trust also are made manifest in your consciences.