Many Proofs They Are Still God’s People 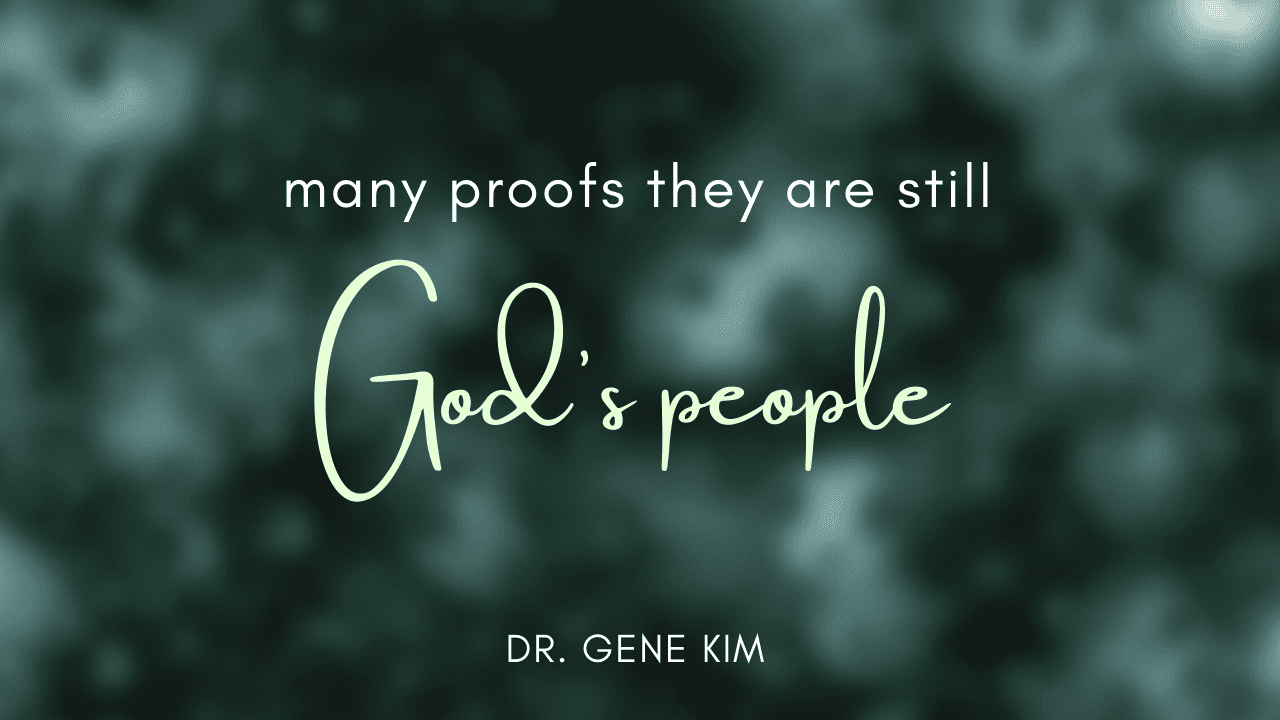 Isaiah 11:10-13: “And in that day there shall be a root of Jesse, which shall stand for an ensign of the people; to it shall the Gentiles seek: and his rest shall be glorious. And it shall come to pass in that day, that the Lord shall set his hand again the second time to recover the remnant of his people, which shall be left, from Assyria, and from Egypt, and from Pathros, and from Cush, and from Elam, and from Shinar, and from Hamath, and from the islands of the sea. And he shall set up an ensign for the nations, and shall assemble the outcasts of Israel, and gather together the dispersed of Judah from the four corners of the earth. The envy also of Ephraim shall depart, and the adversaries of Judah shall be cut off: Ephraim shall not envy Judah, and Judah shall not vex Ephraim.”

Notice how this passage speaks to the restoration of God’s people. “The Lord shall set His hand again the SECOND time to recover the remnants of His people.” This has not happened yet, so it must be a future event. These are not spiritual Jews. There is no arguing with these truths.

God will restore the nation of Israel (gather you out of all countries, and will bring you into your own land). This wasn’t an Old Testament event as it is happening in our world today. He is gathering the Israelites back to the land and they will be restored. Many will say that God has abandoned Israel for good, but this passage proves otherwise.

Daniel 9:24-27: “Seventy weeks are determined upon thy people and upon thy holy city, to finish the transgression, and to make an end of sins, and to make reconciliation for iniquity, and to bring in everlasting righteousness, and to seal up the vision and prophecy, and to anoint the most Holy. Know therefore and understand, that from the going forth of the commandment to restore and to build Jerusalem unto the Messiah the Prince shall be seven weeks, and threescore and two weeks: the street shall be built again, and the wall, even in troublous times. And after threescore and two weeks shall Messiah be cut off, but not for himself: and the people of the prince that shall come shall destroy the city and the sanctuary; and the end thereof shall be with a flood, and unto the end of the war desolations are determined. And he shall confirm the covenant with many for one week: and in the midst of the week he shall cause the sacrifice and the oblation to cease, and for the overspreading of abominations he shall make it desolate, even until the consummation, and that determined shall be poured upon the desolate.”

This passage speaks of national salvation. It doesn’t take seventy weeks for an individual to be saved! God will use His people again at the end times, during the tribulation. Yes, God cut off His people, but it’s only for a time. He will return to them in the future just as it has been foretold. The church took over because the Jews broke their covenant with God, but God will still be faithful to His promises to Israel despite their disobedience. God will restore His covenant with His people, and this time He says it will be everlasting.

Ezekiel 16:2-3: “Son of man, cause Jerusalem to know her abominations, And say, Thus saith the Lord God unto Jerusalem; Thy birth and thy nativity is of the land of Canaan; thy father was an Amorite, and thy mother an Hittite.”

God did cast off the nation of Israel. The above is a proof text by proponents of Replacement theology. However, they do not read on.

Ezekiel 16:60-61: “Nevertheless I will remember my covenant with thee in the days of thy youth, and I will establish unto thee an everlasting covenant. Then thou shalt remember thy ways, and be ashamed, when thou shalt receive thy sisters, thine elder and thy younger: and I will give them unto thee for daughters, but not by thy covenant.”

God says that He shall establish unto them an everlasting covenant. In other words, He shall restore the Jews.

Jeremiah 33:20-21: “Thus saith the Lord; If ye can break my covenant of the day, and my covenant of the night, and that there should not be day and night in their season; Then may also my covenant be broken with David my servant, that he should not have a son to reign upon his throne; and with the Levites the priests, my ministers. As the host of heaven cannot be numbered, neither the sand of the sea measured: so will I multiply the seed of David my servant, and the Levites that minister unto me.”

God is challenging that it is not possible to break the covenant with David, unless there is no day and night.

Jeremiah 33: 24-26: Considerest thou not what this people have spoken, saying, The two families which the Lord hath chosen, he hath even cast them off? thus they have despised my people, that they should be no more a nation before them. Thus saith the Lord; If my covenant be not with day and night, and if I have not appointed the ordinances of heaven and earth;Then will I cast away the seed of Jacob and David my servant, so that I will not take any of his seed to be rulers over the seed of Abraham, Isaac, and Jacob: for I will cause their captivity to return, and have mercy on them.

The Bible also says that whoever has cast the Jews off has despised His people. The Jews are still God’s people.

There are too many passages that talk about the future restoration of Israel, so it is crazy how many people believe in replacement theology.

Isaiah 65:9,11,23 is a passage that debunks anti-dispensationalists. As Bible believers, we believe in a salient thing, and that there is a difference between the Church and the nation of Israel.

The Jews have always been God’s chosen people, we did not replace them at any point as argued by replacement theologists. Despite their wickedness and them turning away from God, we believe God is still using the nation to fulfill His plan.

However, as mentioned in Isaiah 65, the term ‘elect’ is understood by dispensationalists that the Church is considered to be the elect of God spiritually. Whereas the Jews are also His elect, but instead God deals with them physically as a nation.

Nonetheless, replacement theology tries to point out that elect is only referring to specific saved individuals. That’s not true, as we know that when God appointed Israel as His chosen people, He means all of them! Even though spiritually their salvation is not secured, so among the Jews there will be a lot of lost souls going to hell. However, as a physical nation, they are still God’s chosen people.

Isaiah 65:9 “And I will bring forth a seed out of Jacob, and out of Judah an inheritor of my mountains: and mine elect shall inherit it, and my servants shall dwell there.”

This is a good proof text seemingly, we see that the physical nation of Israel is called God’s elect, but replacement theology argues that it refers to only specific saved individual Jews.

Isaiah 65:11,23 “But ye are they that forsake the Lord, that forget my holy mountain, that prepare a table for that troop, and that furnish the drink offering unto that number. They shall not labour in vain, nor bring forth for trouble; for they are the seed of the blessed of the Lord, and their offspring with them.”

Supposedly this is a good proof text, verse 11 shows that the Jews are deceived and choose to reject God, but in verse 23, this particular elect of the nation of Israel is blessed by God and following His law.

This passage may lead certain people to the assumption that the elect is only referring to those small numbers of people who abide by God’s law and righteousness. Those who forsake God’s commandments are not considered as the elect, this is how anti-dispensationalists interpret them.

Nevertheless, Isaiah 64:9-11 clearly shows that the unbelieving sinners ‘are’ still God’s elect because they will be restored in the future.

Isaiah 64: 9-11“Be not wroth very sore, O Lord, neither remember iniquity for ever: behold, see, we beseech thee, we are all thy people. Thy holy cities are a wilderness, Zion is a wilderness, Jerusalem a desolation. Our holy and our beautiful house, where our fathers praised thee, is burned up with fire: and all our pleasant things are laid waste.”

Isaiah 65:7 “Your iniquities, and the iniquities of your fathers together, saith the Lord, which have burned incense upon the mountains, and blasphemed me upon the hills: therefore will I measure their former work into their bosom.”

Even though that generation of Jews’ did not walk right with God, but in Isaiah 64:11, they are still known as God’s people.

Isaiah 65:8 “Thus saith the Lord, As the new wine is found in the cluster, and one saith, Destroy it not; for a blessing is in it: so will I do for my servants’ sakes, that I may not destroy them all.”

This further supports the explanation that despite spiritually rotten and damned, God still will keep them going as a nation, and not allow other nations to destroy His people, because of His promises right from the beginning with Abraham. These are the promises of His blessings towards them.

Isaiah 65:18 “But be ye glad and rejoice for ever in that which I create: for, behold, I create Jerusalem a rejoicing, and her people a joy.”

God merely postpones this nation, and in the future, He will continue to deal with them and restore them. All these proof texts are valid enough to show that the Christians do not replace the Jews at all.