Intermediate Discipleship #5 What is Wrong with Catholicism? 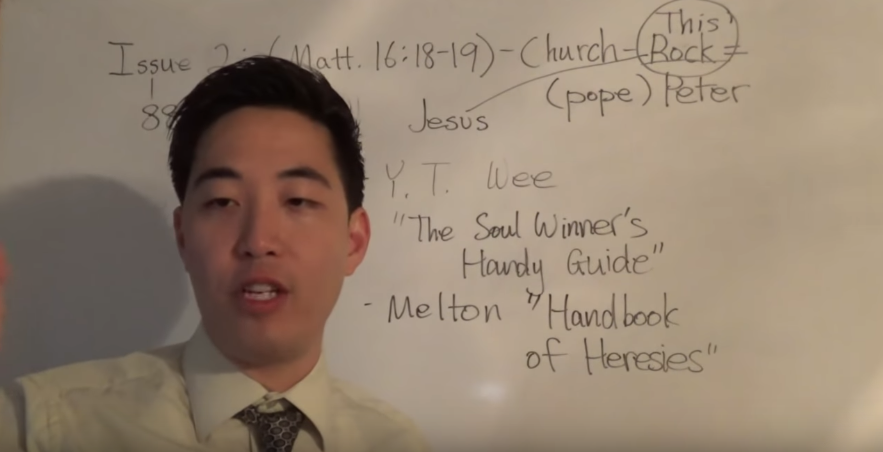 This topic raises some of the wrong teachings from Catholic Churches. One of the biggest problems with Catholicism is that their teachings are very differentiated from one another because they are not indoctrinated properly. Hence debunking their teachings with verses from the Bible is the most effective.

Matthew 1:24-25 Then Joseph being raised from sleep did as the angel of the Lord had bidden him, and took unto him his wife: And knew her not till she had brought forth her firstborn son: and he called his name JESUS.

Catechism 966: Finally the Immaculate Virgin, preserved free from all stain of original sin, when the course of her earthly life was finished, was taken up body and soul into heavenly glory, and exalted by the Lord as Queen over all things, so that she might be the more fully conformed to her Son, the Lord of lords and conqueror of sin and death.” The Assumption of the Blessed Virgin is a singular participation in her Son’s Resurrection and an anticipation of the resurrection of other Christians:

This is untrue, the birth of Jesus Christ by Mary was a miracle and a virgin, but she did have a sexual relationship and was not a perpetual virgin. The verse mentioned Mary’s firstborn. This means Jesus was the firstborn, but she also gave birth again after that, hence sexual intercourse was definitely involved.

Matthew 13:55-57 Is not this the carpenter’s son? is not his mother called Mary? and his brethren, James, and Joses, and Simon, and Judas? And his sisters, are they not all with us? Whence then hath this man all these things? And they were offended in him. But Jesus said unto them, A prophet is not without honour, save in his own country, and in his own house.

Mark 6:3-4 Is not this the carpenter, the son of Mary, the brother of James, and Joses, and of Juda, and Simon? and are not his sisters here with us? And they were offended at him. But Jesus said unto them, A prophet is not without honour, but in his own country, and among his own kin, and in his own house.

Luke 1:36 opposes that argument as ‘cousin’ was stated literally in this verse. Hence, the meaning of the words used was literal. In the verses below, it shows that Jesus showed that he has sisters and brothers.

The Catholic apologist may pull up Genesis 24:60 where ‘sister’ meant close kin, instead of a real sister. Nevertheless, the majority has proven that the meaning of brother and sister is literal, it is also important to take the context into account, and not just the word itself. Also, refer to the verses below that show the literal meaning of a sister:

In Luke 1:46-47, ‘And Mary said, My soul doth magnify the Lord, And my spirit hath rejoiced in God my Saviour’ clearly mentions that Mary needed the Savior, why would she need a savior as she was sinless?

Luke 2:21-24 And when eight days were accomplished for the circumcising of the child, his name was called JESUS, which was so named of the angel before he was conceived in the womb. And when the days of her purification according to the law of Moses were accomplished, they brought him to Jerusalem, to present him to the Lord; (As it is written in the law of the Lord, Every male that openeth the womb shall be called holy to the Lord;) And to offer a sacrifice according to that which is said in the law of the Lord, A pair of turtledoves, or two young pigeons.

Mary had to sacrifice sin offerings, in specific two turtledoves when Jesus was born, which was a rule that was given to all Israelites.

Leviticus 1:1-3,8And the Lord spake unto Moses, saying, Speak unto the children of Israel, saying, If a woman have conceived seed, and born a man child: then she shall be unclean seven days; according to the days of the separation for her infirmity shall she be unclean. And in the eighth day the flesh of his foreskin shall be circumcised. And if she be not able to bring a lamb, then she shall bring two turtles, or two young pigeons; the one for the burnt offering, and the other for a sin offering: and the priest shall make an atonement for her, and she shall be clean.

Many Catholics demand that Mary is to be exalted and venerated, even if some of them say “We are not worshipping her.” The below is the only one occasion that was mentioned of Mary in the book of Acts.

Acts 1:14 These all continued with one accord in prayer and supplication, with the women, and Mary the mother of Jesus, and with his brethren.

As Bible believers, we do not deny that it was a divine and sacred duty that Mary carried the Son of God, and gave birth to Jesus Christ. However, Catholicism has taken it out of context and turned it into a deified Semiramis, or pagan Babylonian goddess, which is what the Bible is completely against.

According to the Bible, if Mary was such an important figure, then why was she only being mentioned once, but not multiple times in the Bible, as compared to Peter and Paul who were both mentioned so many more times than her at the beginning of the Church Age.

1 Timothy 2:12 teaches us that women are not supposed to be in authority over men from the biblical perspective in ‘But I suffer not a woman to teach, nor to usurp authority over the man‘. The exaltation of women is not allowed. That explains why the worshiping of Mother Mary by the Catholics is wrong.

Jeremiah 7:18 The children gather wood, and the fathers kindle the fire, and the women knead their dough, to make cakes to the queen of heaven, and to pour out drink offerings unto other gods, that they may provoke me to anger.

Coming from a place of love, we Bible believers need to remind Catholics that they may be worshiping the wrong Mary who is not from the Bible, but a satanic pagan Goddess, the queen of heaven in the above Bible verse.

In, Jeremiah 44:17-25  the title ‘Queen of Heaven’ is abominable and the whole practice of sacrificing to the queen of heaven an abomination.

Jeremiah 44:25-26 Thus saith the Lord of hosts, the God of Israel, saying; Ye and your wives have both spoken with your mouths, and fulfilled with your hand, saying, We will surely perform our vows that we have vowed, to burn incense to the queen of heaven, and to pour out drink offerings unto her: ye will surely accomplish your vows, and surely perform your vows. Therefore hear ye the word of the Lord, all Judah that dwell in the land of Egypt; Behold, I have sworn by my great name, saith the Lord, that my name shall no more be named in the mouth of any man of Judah in all the land of Egypt, saying, The Lord God liveth.

According to the Bible, Mary is portrayed as a woman of integrity and filled with humility, not an idol that requires exaltation. She is one of the prime examples for women today, someone who is highly respected.

Catechism 881: The Lord made Simon alone, whom he named Peter, the “rock” of his Church. He gave him the keys of his Church and instituted him shepherd of the whole flock. The office of binding and loosing which was given to Peter was also assigned to the college of apostles united to its head. This pastoral office of Peter and the other apostles belongs to the Church’s very foundation and is continued by the bishops under the primacy of the Pope.

Catechism 882: The Pope, Bishop of Rome and Peter’s successor, “is the perpetual and visible source and foundation of the unity both of the bishops and of the whole company of the faithful. For the Roman Pontiff, by reason of his office as Vicar of Christ, and as pastor of the entire Church has full, supreme, and universal power over the whole Church, a power which he can always exercise unhindered.

Matthew 16:18-19 And I say also unto thee, That thou art Peter, and upon this rock, I will build my church; and the gates of hell shall not prevail against it. And I will give unto thee the keys of the kingdom of heaven: and whatsoever thou shalt bind on earth shall be bound in heaven: and whatsoever thou shalt loose on earth shall be loosed in heaven.

The Catholic argument is that the rock is Peter. But, the Rock was referring to Jesus, not Peter. The evidence is below:

John 2:19-21 Jesus answered and said unto them, Destroy this temple, and in three days I will raise it up. Then said the Jews, Forty and six years was this temple in building, and wilt thou rear it up in three days? But he spake of the temple of his body.

Peter knew it himself that he is not the rock, but Jesus is. This is an epistle that Peter wrote and he made it clear that this head of the cornerstone is Jesus Christ, not Peter.

1 Peter 2: 6-8 Wherefore also it is contained in the scripture, Behold, I lay in Sion a chief corner stone, elect, precious: and he that believeth on him shall not be confounded. Unto you therefore which believe he is precious: but unto them which be disobedient, the stone which the builders disallowed, the same is made the head of the corner, And a stone of stumbling, and a rock of offence, even to them which stumble at the word, being disobedient: whereunto also they were appointed.

Paul also knows that Jesus Christ is the rock.

1 Corinthians 10:4 And did all drink the same spiritual drink: for they drank of that spiritual Rock that followed them: and that Rock was Christ.

Two books that are recommended to be bought are “The Soul Winner’s guide” by Y.T. Wee and  Handbook of heresies by James Melton.