Is Your Bible from Satan or God? YOU’LL BE SHOCKED | Intermediate Discipleship #1 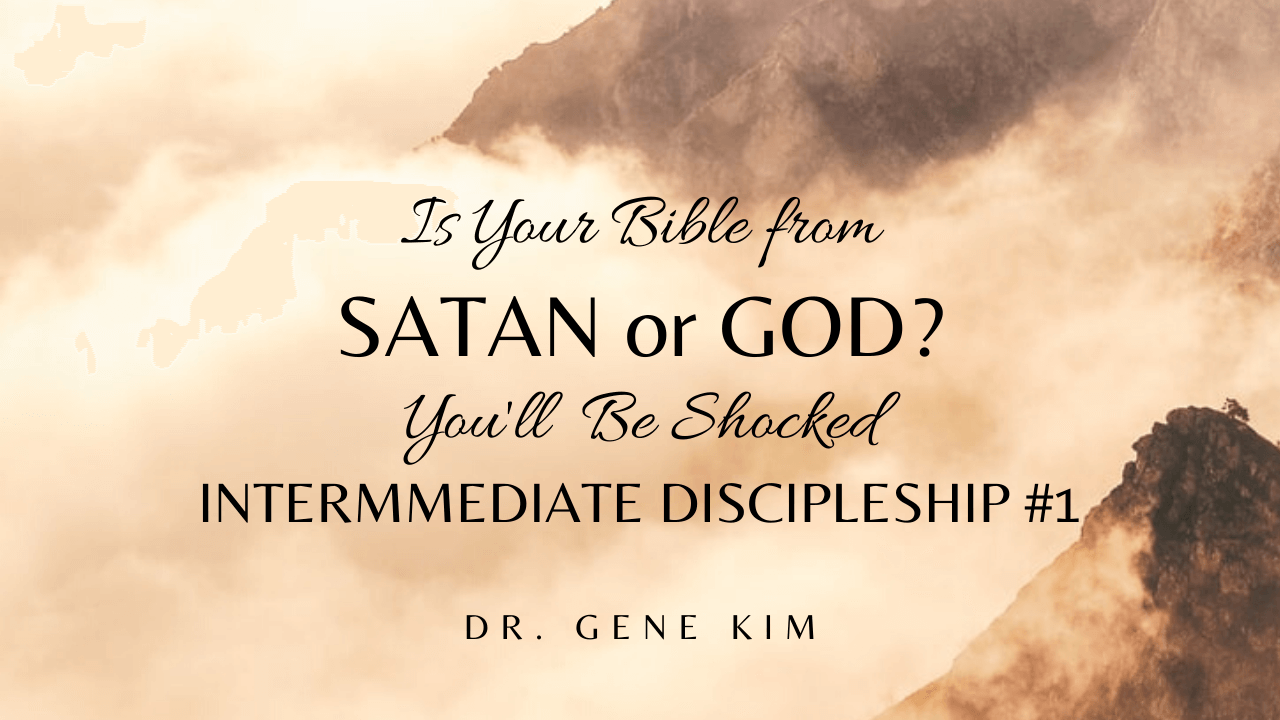 There are two resources that the pastor has recommended to get:
– Gail Riplinger – New Age Bible Versions
– Sam Gipp – The Answer Book
– Terry Watkins – The Attack on the Bible (optional)

There are two stances that a Bible believer needs to be solidified so that he can grow more in the right doctrine:
– King James bible issue
– Dispensationalism

Why does one believe that the King James Version is the perfect pure word of God? The reasons are the following:
There are over 200 modern Bible versions out there. It was Satan’s work to instigate more confusion and make it more difficult to find God’s true words.

1 Corinthians 14: 33: “For God is not the author of confusion, but of peace, as in all churches of the saints.”

God says if one changes His words, He takes it very seriously in punishing him or her. That’s why there has to be one perfect Bible.

Revelations 22: 18: “For I testify unto every man that heareth the words of the prophecy of this book, If any man shall add unto these things, God shall add unto him the plagues that are written in this book”

The following verses are clear examples where the words have been changed.

The ESV, NLT, NIV, NWT, and most modern bibles do not even have this verse. They are either in brackets or in the footnotes.

Mark 1:2: “As it is written in the prophets, Behold, I send my messenger before thy face, which shall prepare thy way before thee. 3 The voice of one crying in the wilderness, Prepare ye the way of the Lord, make his paths straight.”

Luke 23:42: “And he said unto Jesus, Lord, remember me when thou comest into thy kingdom.”

NIV, NLT, ESV: Then he said, “Jesus, remember me when you come into your kingdom.”
The thief hanged on the cross recognized that Jesus is God. This deity of Jesus Christ is retained in the KJV.

Mark 16:5 “And entering into the sepulchre, they saw a young man sitting on the right side, clothed in a long white garment; and they were affrighted. And he saith unto them, Be not affrighted: Ye seek Jesus of Nazareth, which was crucified: he is risen; he is not here: behold the place where they laid him. But go your way, tell his disciples and Peter that he goeth before you into Galilee: there shall ye see him, as he said unto you. And they went out quickly, and fled from the sepulchre; for they trembled and were amazed: neither said they any thing to any man; for they were afraid. Now when Jesus was risen early the first day of the week, he appeared first to Mary Magdalene, out of whom he had cast seven devils. And she went and told them that had been with him, as they mourned and wept. And they, when they had heard that he was alive, and had been seen of her, believed not. After that he appeared in another form unto two of them, as they walked, and went into the country. And they went and told it unto the residue: neither believed they them. Afterward he appeared unto the eleven as they sat at meat, and upbraided them with their unbelief and hardness of heart, because they believed not them which had seen him after he was risen. And he said unto them, Go ye into all the world, and preach the gospel to every creature. He that believeth and is baptized shall be saved; but he that believeth not shall be damned. And these signs shall follow them that believe; In my name shall they cast out devils; they shall speak with new tongues; They shall take up serpents; and if they drink any deadly thing, it shall not hurt them; they shall lay hands on the sick, and they shall recover. So then after the Lord had spoken unto them, he was received up into heaven, and sat on the right hand of God. And they went forth, and preached every where, the Lord working with them, and confirming the word with signs following. Amen.”

Mark 16 consists of 20 verses. The modern translations have 5 verses, accompanied with either a bracket or a footnote.

John 7-8: “Jesus went unto the mount of Olives. And early in the morning he came again into the temple, and all the people came unto him; and he sat down, and taught them. And the scribes and Pharisees brought unto him a woman taken in adultery; and when they had set her in the midst, They say unto him, Master, this woman was taken in adultery, in the very act. Now Moses in the law commanded us, that such should be stoned: but what sayest thou? This they said, tempting him, that they might have to accuse him. But Jesus stooped down, and with his finger wrote on the ground, as though he heard them not. So when they continued asking him, he lifted up himself, and said unto them, He that is without sin among you, let him first cast a stone at her. And again he stooped down, and wrote on the ground. And they which heard it, being convicted by their own conscience, went out one by one, beginning at the eldest, even unto the last: and Jesus was left alone, and the woman standing in the midst. When Jesus had lifted up himself, and saw none but the woman, he said unto her, Woman, where are those thine accusers? hath no man condemned thee? She said, No man, Lord. And Jesus said unto her, Neither do I condemn thee: go, and sin no more.”

NLT/NASV/ESV/NWT: The above verses do not exist in these Bibles.

Acts 1:3: “To whom also he shewed himself alive after his passion by many infallible proofs, being seen of them forty days, and speaking of the things pertaining to the kingdom of God.”

There is infallible proof – there are no weak points in the resurrection of Jesus Christ. It’s unfailing and 100% true.

Luke 16:23: “And in hell he lift up his eyes, being in torments, and seeth Abraham afar off, and Lazarus in his bosom. ”

The modern version of NIV refers to the grave as Hades, supporting a Jehovah Witness mindset that hell is a grave.
NIV: “In Hades, where he was in torment, he looked up and saw Abraham far away, with Lazarus by his side.”
The NKJV version also uses the word Hades for grave.


John 1:18: “No man hath seen God at any time; the only begotten Son, which is in the bosom of the Father, he hath declared him.”

Why? He did have a beginning – a birth through the virgin Mary. Jesus Christ was born but God did not neither a beginning nor can He be born. But what did the modern versions do?
NASV/NWT: “No one has seen God at any time; the only begotten God who is in the bosom of the Father, He has explained Him.”

Colossians 1:14: “In whom we have redemption through his blood, even the forgiveness of sins”

The modern versions have removed the phrase “through his blood,” which is a crucial part of the message.

NIV/NLT/ESV: “In whom we have redemption, the forgiveness of sins.”

Philippians 2: 5-8: “Let this mind be in you, which was also in Christ Jesus:6 Who, being in the form of God, thought it not robbery to be equal with God: 7 But made himself of no reputation, and took upon him the form of a servant, and was made in the likeness of men: 8 And being found in fashion as a man, he humbled himself, and became obedient unto death, even the death of the cross.”

NASV/NIV/ESV: “Who, being in very nature[a] God, did not consider equality with God something to be used to his own advantage; rather, he made himself nothing by taking the very nature[b] of a servant, being made in human likeness. And being found in appearance as a man, he humbled himself by becoming obedient to death— even death on a cross!”

Acts 8: 36: “And as they went on their way, they came unto a certain water: and the eunuch said, See, here is water; what doth hinder me to be baptized? And Philip said, If thou believest with all thine heart, thou mayest. And he answered and said, I believe that Jesus Christ is the Son of God. And he commanded the chariot to stand still: and they went down both into the water, both Philip and the eunuch; and he baptized him.”

The modern translations of NLT, NASV, ESV either bracket or remove the phrase, “I believe that Jesus Christ is the Son of God.”

The KJV says that it’s very narrow. Only a minority can enter. But it is not difficult. It’s only the modern versions that try to tell you that it’s difficult.
NKJV: “Because narrow is the gate and difficult is the way which leads to life, and there are few who find it.”
NLT: “But the gateway to life is very narrow and the road is difficult, and only a few ever find it.”

Isaiah 14:12: “How art thou fallen from heaven, O Lucifer, son of the morning! how art thou cut down to the ground, which didst weaken the nations!”

Who is the morning star sung about in hymns or read about in Revelations 22:16? It is Jesus Christ. Modern versions have replaced Lucifer’s name with day star, morning star, rising star. It’s almost as if Lucifer is considered as Jesus Christ here.
NIV: “How you have fallen from heaven, morning star, son of the dawn! You have been cast down to the earth, you who once laid low the nations!”
ESV: “How you are fallen from heaven, O Day Star, son of Dawn! How you are cut down to the ground, you who laid the nations low!”

ESV/NASV/NWT: “And there was again war with the Philistines at Gob, and Elhanan the son of Jaare-oregim, the Bethlehemite, struck down Goliath the Gittite, the shaft of whose spear was like a weaver’s beam.”

2 Kings 23: 29: “In his days Pharaohnechoh king of Egypt went up against the king of Assyria to the river Euphrates: and king Josiah went against him; and he slew him at Megiddo, when he had seen him.”

2 Chronicles 35:20: “After all this, when Josiah had prepared the temple, Neco king of Egypt came up to fight against Carchemish by Euphrates: and Josiah went out against him.”

In the KJV version, Josiah went against the king of Egypt both times. But in the modern translations,
NLT/NIV/NKJV: “While Josiah was king, Pharaoh Neco, king of Egypt, went to the Euphrates River to help the king of Assyria. King Josiah and his army marched out to fight him, but King Neco killed him when they met at Megiddo.”