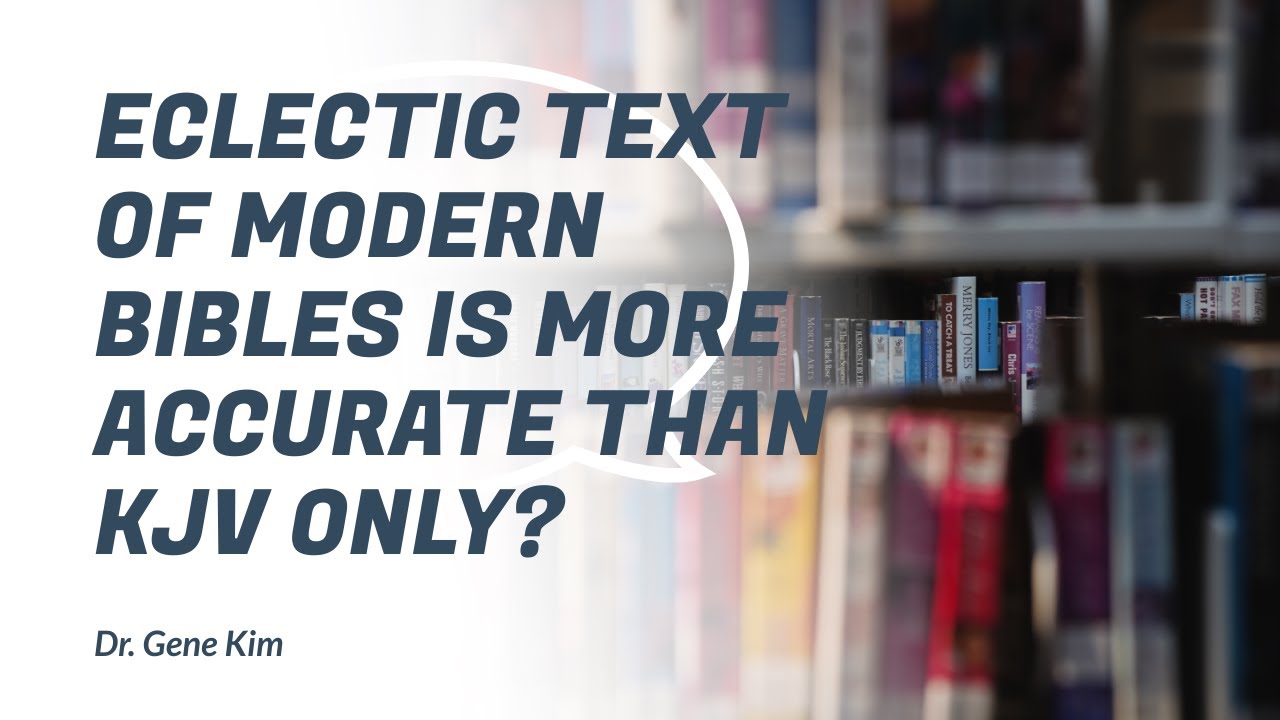 There are so many pieces of evidence to support the KJV by now. Scholarly thinking says the eclectic text (also called the critical text) is better because it contains shorter verses. That’s why there are shorter verses in the NIV! There are missing verses in many modern Bibles, including the ESV.

Why would they want shorter verses?

Let’s look at an example. Half of Mark 16 is chopped off in the Alexandrian manuscripts. They automatically assume that additional verses were added later. They believe the shorter verses are closer to the original. When they work in this way, they are translating merely on assumption. Even though they claim such advanced knowledge, they don’t know that those verses weren’t original. But based on their human systems and human knowledge that make them so proud, they feel the right to take away verse out of God’s Word, which is NOT ok. They are relying on human wisdom and not that of God.

The traditional text (KJV) is closer to the later manuscripts, the Alexandrian to the older. Eclectic text is the text where many modern Bible comes from. It is Also known as critical text and Alexandrian manuscripts. This knowledge will be important in our conversation going forward.

2 Corinthians 2:17: “For we are not as many, which corrupt the word of God: but as of sincerity, but as of God, in the sight of God speak we in Christ.”

Corruption of the Bible was very common, even in the time of the Apostle Paul! It’s common knowledge that there were changes and additional books added to the Bible in ancient times. Why then do the scholars advocate the assumption that the older manuscripts are the most accurate and pure?

Revelation 22:19: “And if anyone takes words away from this scroll of prophecy, God will take away from that person any share in the tree of life and in the Holy City, which are described in this scroll.”

God warned about people taking words out of His book. This work that the scholars do so carelessly has serious consequences. People who believe they know the Bible so well ignore a plan and clear warning from God Himself right within the Scriptures!

Dean Bergen (Oxford scholar and Dean of Chichester) quotes this: “It can per force only be divined from their contents that they exhibit fabricated text. No amount of honest copying persevered in for any number of centuries could by possibility resulted in such documents. Separated from one another in an actual date, by fifty perhaps by a hundred years, they must have branched off from a common corrupt ancestor and straightway become exposed continuously to fresh, deprave influences. ” The thing about these Alexandrian manuscripts (Sinaticus and Vaticanus) is that there are pen knife markings as well as annotations/writings all over. It was clear that people tampered with these manuscripts.

Dr. Edward F. Hills who worked on New Testament texts criticism at Harvard says, “Thus we see that there is no convincing reason for regarding either the Western text or the Alexandrian text as a true New Testament text. On the contrary, there are many grounds for believing that both these texts have been seriously corrupted by the scribes. The Western text being usually characterized by editions and the Alexandrian by omissions.”

Origen, a church father and someone who worked on Alexandrian manuscripts, stated, “The differences among the manuscripts have become great, either through the negligence of some copyists or through the perverse audacity of others. They either neglect to check over what they have transcribed or in the process of transcribing, they lengthen or shorten as they please.” (Text of the New Testament, 151-152). This quote is further proof that there was a lot of corruption in transcribing manuscripts going on in Alexandria. This corruption is what brought about the eclectic text that most modern Bibles are based on.

Kurt Aland, a leading New Testament critic and an editor in the eclectic text quotes, “In the early period, there were several recessions of the text at the beginning of the fourth-century scholars at Alexandria and elsewhere. Took as many good manuscripts as were available and applied their philosophical methods to compile a new uniform text.

Dr. Edward F. Hills again says: “In this commentary, Origen, the leading Christian critic of antiquity gives us an insight into the arbitrary and highly subjective manner in which New Testament textual criticism was carried on at Alexandria about 230 AD.”

Matthew 19:20-21: “Honour thy father and thy mother: and, Thou shalt love thy neighbour as thyself.  The young man saith unto him, All these things have I kept from my youth up: what lack I yet? Jesus said unto him, If thou wilt be perfect, go and sell that thou hast, and give to the poor, and thou shalt have treasure in heaven: and come and follow me.“

Jesus says to this young man, “If you are good/perfect, keep all these commandments” and obviously this young man wasn’t perfect. However, how Origen edited the Bible became very apparent. He chopped out the second half of verse 19, which was subjective and arbitrary.

Is that the kind of Bible a Christian wants to build their faith on?

All of this shows that it takes more blind faith to believe in modern manuscripts than it does to believe in the accuracy of the KJV. The scholars automatically assume that the Alexandrian text is without corruption, which is not correct.