Why Do We Believe a Perfect Bible Exists (KJV)? Proof? 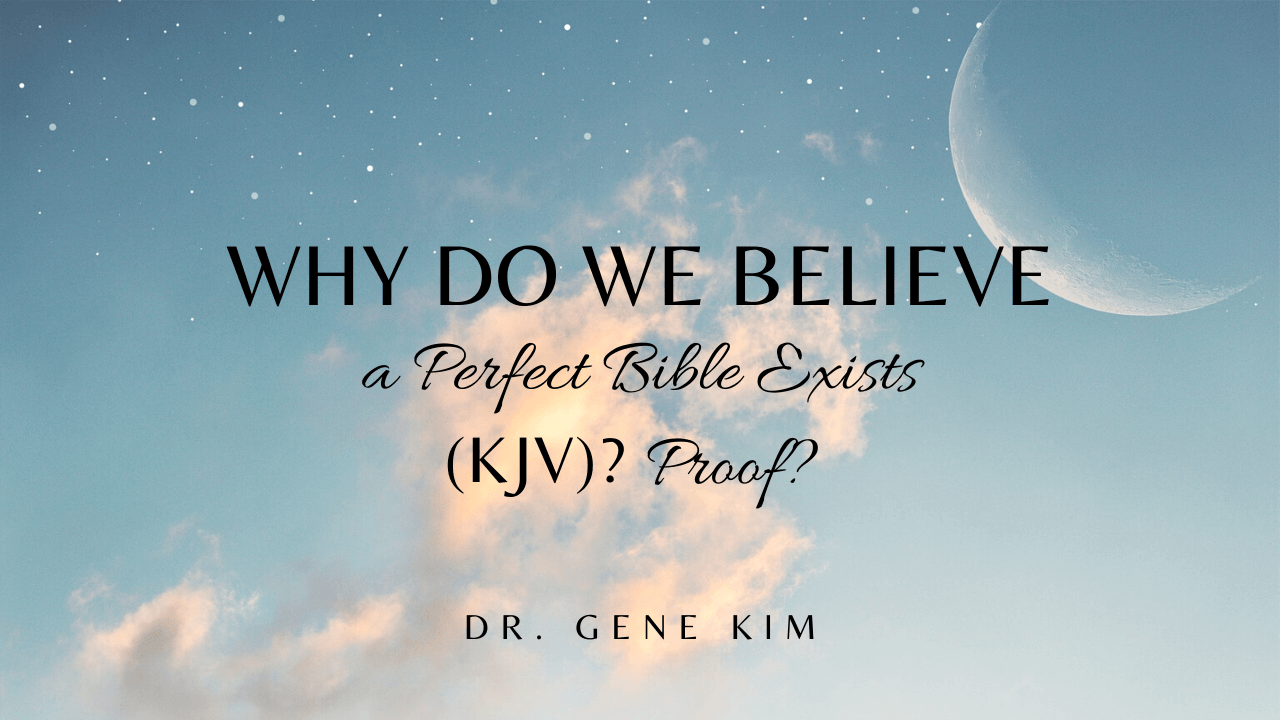 It is important to recognize that we would have no final authority of what is right and what is wrong without demanding a perfect word of God.

For Bible believers, the King James Bible encompasses God’s pure and perfect words. If we believe that the word of God has mistakes, then we do not know whether it is teaching correct doctrine or not. Critics that do not believe in a perfect Bible insist that only the original manuscripts, which the apostles and Old Testament authors wrote, are perfect. They do not consider the copies of manuscripts that came out of the originals to be given by God’s inspiration. To find out whether the originals or the copies and manuscripts that came from the originals are the perfect words of God, we will refer to 2 Timothy.

What are the scriptures?

2 Timothy 3:16: “All scripture is given by inspiration of God, and is profitable for doctrine, for reproof, for correction, for instruction in righteousness:”

What is meant by inspiration is that it is God-breathed (every breath and word of God).

Despite this, scholars claim that there are mistakes in the copies, manuscripts, and translations that came from the originals and are imperfect, unlike the originals themselves.

We, however, disagree with this. We believe all scripture, including copies and manuscripts, is perfect, further supported by the previous verse 15.

2 Timothy 3:15 “And that from a child thou hast known the holy scriptures, which are able to make thee wise unto salvation through faith which is in Christ Jesus.”

Paul tells Timothy that he had the holy scripture since he was a child, which, logically speaking, could not have been original scripture but a copy. The scriptures that everyone at this time were also considered to be perfect.

Jesus and the eunuch both had copies of the scriptures, not the originals

Luke 4:17-19: “And there was delivered unto him the book of the prophet Esaias. And when he had opened the book, he found the place where it was written, The Spirit of the Lord is upon me, because he hath anointed me to preach the gospel to the poor; he hath sent me to heal the brokenhearted, to preach deliverance to the captives, and recovering of sight to the blind, to set at liberty them that are bruised, To preach the acceptable year of the Lord.”

Acts 8:30: “And Philip ran thither to him, and heard him read the prophet Esaias”

Someone is reading the book of Isaiah, which has to be a copy. We find out who is reading Isaiah in verse 27, an Ethiopian man.

Acts 8:27: “And he arose and went: and, behold, a man of Ethiopia, an eunuch of great authority under Candace queen of the Ethiopians, who had the charge of all her treasure, and had come to Jerusalem for to worship,”

If only the originals are considered scripture, why does the Bible say that both Jesus and the Ethiopian man had access to scripture? If you say that only one of them was original, that still implies that the other book is a copy, which is still considered scripture, and all scripture as stated earlier, is given by inspiration of God.

The very first words of God were destroyed, but we still have them today

Exodus 34 presents us with the very first words of God. Recall that God had written the ten commandments down on stone tablets and that Moses broke those original tablets.

Exodus 34:1: “And the Lord said unto Moses, Hew thee two tables of stone like unto the first: and I will write upon these tables the words that were in the first tables, which thou brakest.”

After having broken the two tablets containing God’s words, God instructs Moses to make tablets like the originals so that he can rewrite the commandments from the originals. This verse shows that the original tablets were destroyed and that copies (inspired by God) took their place. Although we do not have the originals with us today, it does not mean that God’s word is gone.

Critics will accuse KJV-onlyists and Bible believers of believing in double inspiration, meaning that God inspired Scripture multiples times. Double inspiration is correct, as the Bible itself shows us in Jeremiah 36.

God inspires the writings of the roll the first time.

Jeremiah 36:32: “Then took Jeremiah another roll, and gave it to Baruch the scribe, the son of Neriah; who wrote therein from the mouth of Jeremiah all the words of the book which Jehoiakim king of Judah had burned in the fire: and there were added besides unto them many like words.”

The writings in the first roll are copied on another roll, and more words are added to the copy, double inspiration.

Other examples of Double inspiration

Another instance where a copy was considered scripture was Proverbs 25.

Proverbs 25:1: “These are also proverbs of Solomon, which the men of Hezekiah king of Judah copied out.

This chapter was copied from the writings of Solomon. The originals of the law of Moses were also based on a copy.

Deuteronomy 17:18: “And it shall be, when he sitteth upon the throne of his kingdom, that he shall write him a copy of this law in a book out of that which is before the priests the Levites:”

As shown in previous verses, the originals are not the only writings to be given by inspiration. It also shows that even after the originals were done away, God replaced them with copies. He considers those copies to be scripture.

The Bible also shows us an example where the original is based on a copy and not the other way around. This is found in Ezra 4.

The whole book of Ezra is based on a copy of a letter.

Other instances of scripture as copies are found in the following verses:

There are so many verses to prove that copies are considered scripture that it is unthinkable to believe that the originals are the only true God-inspired writings. All scripture is inspired by God.