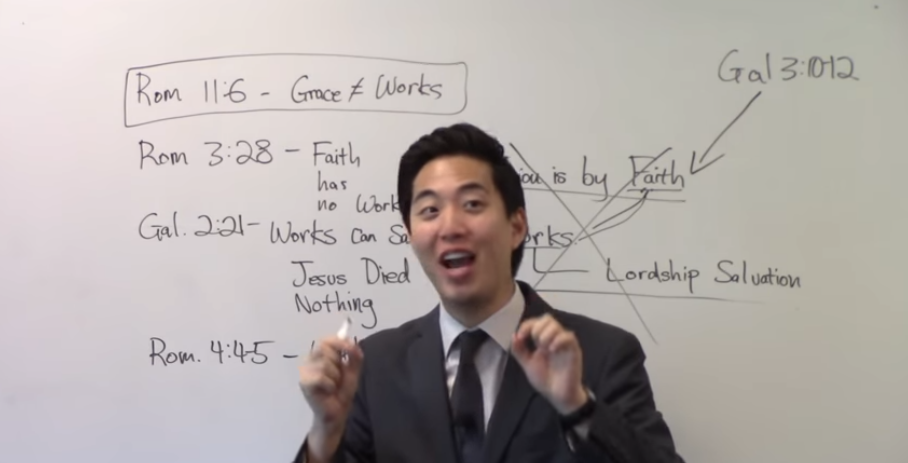 What is Lordship salvation?

John Piper, John MacArthur, Ray Comfort, and Paul Washer all teach Lordship salvation which states “If you get out of faith, you lose your salvation.” This is a doctrine that Bible believers must avoid. It is heretical. The Roman Catholic, Jehovah Witnesses, and Seventh Day Adventists teach the same thing, and yet these organizations will claim that they believe saved by faith.

They use “faith that works,” not “works that save,” which is a charming saying, but let’s look at what the Bible says.

In this article, we examine Lordship salvation in four parts:

The Bible clearly says that salvation is through faith only, faith and works are separate

Here are 5 Bible verses that show that faith is separate from works. Therefore, the Bible is against Lordship salvation or the notion that “If you are saved, you must show works.”

Christians automatically cancel salvation by grace when they have work. They have to separate the two.

Another argument the Catholic church has is that they deny salvation by works, but because of the faith, they will have works. But, the Bible says that this faith has no works accompanied. The two are separate. The Devil’s people are getting craftier.

Romans 3:24-28 “Being justified freely by his grace through the redemption that is in Christ Jesus: Whom God hath set forth to be a propitiation through faith in his blood, to declare his righteousness for the remission of sins that are past, through the forbearance of God; To declare, I say, at this time his righteousness: that he might be just, and the justifier of him which believeth in Jesus. Where is boasting then? It is excluded. By what law? of works? Nay: but by the law of faith. Therefore we conclude that a man is justified by faith without the deeds of the law.“

Let’s take a look at another solid verse for proof. If Christians believe that their works count, then Jesus died in vain. Jesus died for a reason, to save us.

Galatians 2: 21 “I do not frustrate the grace of God: for if righteousness come by the law, then Christ is dead in vain.”

Many churches will say, “If you’re saved, where are your works? You stopped reading the Bible, going to church, you were not saved to begin with.” However, the Bible says that those who are working are under the curse. They have to continue to work to keep their salvation.

Galatians 3: 10-12 “For as many as are of the works of the law are under the curse: for it is written, Cursed is every one that continueth not in all things which are written in the book of the law to do them. But that no man is justified by the law in the sight of God, it is evident: for, The just shall live by faith. And the law is not of faith: but, The man that doeth them shall live in them.”

The mistake of combining sanctification and salvation

Colossians 1:21-23 “And you, that were sometime alienated and enemies in your mind by wicked works, yet now hath he reconciled. In the body of his flesh through death, to present you holy and unblameable and unreproveable in his sight: If ye continue in the faith grounded and settled, and be not moved away from the hope of the gospel, which ye have heard, and which was preached to every creature which is under heaven; whereof I Paul am made a minister;”

The above is a famous passage that Lordship salvation proponents use to prove that Christians need to continue in faith.

Do Christians get salvation only when we are saved?

No, when Christians get saved in Jesus Christ, there are so many more – sanctification (separation from sin to holiness – which is a process of works), blessings, justification, atonement, etc.

1 ) Sanctification is for the judgment seat of Christ (rewards, not hell)

1 Thessalonians 5:23 “And the very God of peace sanctify you wholly; and I pray God your whole spirit and soul and body be preserved blameless unto the coming of our Lord Jesus Christ.“

Ephesians 5:25-27 “Husbands, love your wives, even as Christ also loved the church, and gave himself for it; That he might sanctify and cleanse it with the washing of water by the word, That he might present it to himself a glorious church, not having spot, or wrinkle, or any such thing; but that it should be holy and without blemish.”

We will see that the verse in Colossians and Ephesians have the same application – we are to be sanctified that Jesus may present us holy and blameless at the Judgment seat of Christ. The judgment is not about our soul condemned in hell.

Salvation only has to do only with the soul. Sanctification is all 3 – it’s body, soul, and spirit as according to 1 Thessalonians 5.

2 Corinthians 5:10 “For we must all appear before the judgment seat of Christ; that every one may receive the things done in his body, according to that he hath done, whether it be good or bad.”

4) Understand that the body and soul are separate

As an unbeliever, the soul is attached to the body. So both body and soul are condemned. But when salvation happens, God cuts off something from saved believers. Their souls are cut off from their bodies that continue to sin. If they do not continue in good works, their souls are still saved. The two (body and soul) are separate.

The entire book of Colossians has the same theme – a saved Christian should continue to do good works, not to avoid hell, but for rewards. There was no reference to hell, but the connection was to reward and judgment at the Judgment Seat of Christ.

How to debunk Lordship salvation

Lordship salvation teaches that if Christians got saved by faith in the beginning, they will have works at the end. But let’s look at what Paul says.

Galatians 3:1-3 “O foolish Galatians, who hath bewitched you, that ye should not obey the truth, before whose eyes Jesus Christ hath been evidently set forth, crucified among you? This only would I learn of you, Received ye the Spirit by the works of the law, or by the hearing of faith? Are ye so foolish? having begun in the Spirit, are ye now made perfect by the flesh?”

If we have begun in faith, we end in faith. We do not end in works.

The proponents of Lordship salvation may use James 2: 17 to say that Christians need works in order to perfect their faith. If they continue to look at this entire passage, they have to admit that James is talking about a salvation that is wrought by works and faith. James 2 is also a direct contradiction to Galatians 3.

James 2: 17-26 “Even so faith, if it hath not works, is dead, being alone. Yea, a man may say, Thou hast faith, and I have works: shew me thy faith without thy works, and I will shew thee my faith by my works. Thou believest that there is one God; thou doest well: the devils also believe, and tremble. But wilt thou know, O vain man, that faith without works is dead? Was not Abraham our father justified by works, when he had offered Isaac his son upon the altar? Seest thou how faith wrought with his works, and by works was faith made perfect? And the scripture was fulfilled which saith, Abraham believed God, and it was imputed unto him for righteousness: and he was called the Friend of God. Ye see then how that by works a man is justified, and not by faith only. Likewise also was not Rahab the harlot justified by works, when she had received the messengers, and had sent them out another way? For as the body without the spirit is dead, so faith without works is dead also.”

Let’s attempt to resolve this contradiction by taking the word of God as it is written. Who is the book of James written to?

James 1:1 “James, a servant of God and of the Lord Jesus Christ, to the twelve tribes which are scattered abroad, greeting.”

James 5:3 “Your gold and silver is cankered; and the rust of them shall be a witness against you, and shall eat your flesh as it were fire. Ye have heaped treasure together for the last days.”

We will see it quite clearly that James was referring both to the 12 tribes of Israel (historical context) and the tribulation Jews (last days in the future). This matches what the tribulation saints have to do in the book of Revelation; they have to keep both the commandments of God and the faith of Jesus.

Revelation 14:12 “Here is the patience of the saints: here are they that keep the commandments of God, and the faith of Jesus.”

Galatians 3:4 “Have ye suffered so many things in vain? if it be yet in vain.”

If works were necessary, then why would the early Christians have to be martyred if they could work for salvation? What was the point of the burning martyrs, if they did not believe in faith? They were tortured because they disagreed that salvation was based on works. Today, the Laodicean Christians are the greatest disgrace – Episcopalians, Methodists, even Baptists are reuniting with the Catholic church.

Galatians 3:5 “He therefore that ministereth to you the Spirit, and worketh miracles among you, doeth he it by the works of the law, or by the hearing of faith?”