Three Secrets to Master the Book of Revelation 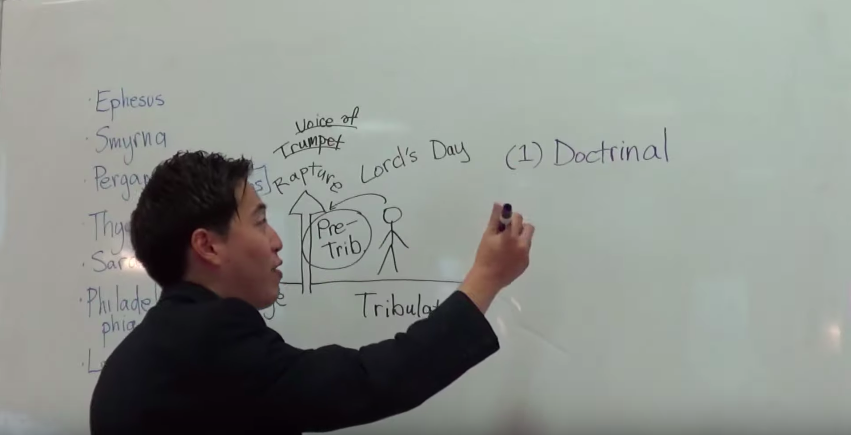 What is important to note is that John said that he was in the spirit in the Lord’s Day (tribulation timeline). A lot of people wrongly take verses from Revelation and apply it to themselves. There are verses where it talks about losing your salvation, your name being blotted out of the book of life, you have to do these works to keep saved, but people do not know that these verses are applying to people in the tribulation.

In Revelation 1, John said “I was in the spirit on the Lord’s Day, and heard behind me a great voice as of a trumpet”. When we look at 1 Thessalonians 4, 1 Corinthians 15, Revelation 4, we know that the rapture is sounded by the trumpet voice of God. So when John said “behind me”, it proves that it is a pre-tribulation rapture. After the age of the church (where we are right now), there will be a rapture before the tribulation starts.

Revelation 1:11 – God is speaking here saying I am Alpha and Omega (whcih are literally letter A and Z in the Greek alphabet) – so what God is saying is “I’m the beginning and I’m the end”. He has no time, he never had a beginning nor an ending. God’s telling John that whatever he’s seen he’s got to write it in the book and send it unto seven churches which are in Asia.

As you read the book of revelations, keep these 3 applications in mind.

The first is doctrinal, which is a specific truth that the verse is telling you. For example, in Revelation 2, it talks about a revelation to Revelation 3 doing works for salvation as well as blotting out the name of the book life. But we know that this is happening at the tribulation timeline.

The third is spiritual, which is taking a verse then spiritualizing it. You can turn this into a valuable lesson. For example, when we take the passage about Jews, the children of Israel eating quails in the wilderness. Spiritually, quails represented the lust of the flesh. The Jews spiritually were representing the church.

Most of the time, when I am preaching, I will preach at the spiritual problem because there is where we need to be “cut”.

This is where a lot of people also go wrong. The Alexandrian scholars and secular scholars come out today where they spiritualize the bible verses. William Lane Craig (brilliant theologian debating against atheists) spiritualizes a passage about the wolf lying down with the lam and the young lion with the calf. He doesn’t take it literally. He talks about a strange conundrum about what happened during Isaiah’s time and looked like in a picture. People stretch their imagination there.

Another example would be the Jehovah Witnesses, they look at Revelation 7 and it mentions the 12 tribes of Israel. Because this does not go well with them, they spiritualize it and say “Well, that’s referring to 144,000 Jehovah Witnesses.”

Another example would be the Mid-Acts or Hyper dispensationalists, they go by so much doctrine, that they avoid spiritual truths. They would not read the book of Revelation at all because they say that it’s not for us and there’s no spiritual lessons to be drawn from this book. This is also dangerous.

To put the threefold application into an example, let’s look at

Psalms 22, 1: My God, my God why hast thou forsaken me. Why art thou so far from helping me and from the words of my roaring.

So the threefold application here is that:

– Historical: King David is crying to God saying “I feel forsaken, help me out” – This is something that happened in the past during David’s time.

– Doctrinal: This was also referring to the Messiah Jesus Christ. What did Jesus say on the cross? “My God, my God, why hast thou forsaken me?”

– Spiritual: This also refers to us sometimes when we cry out to God for help.

We need to have a three-fold application. Otherwise, we are going to encounter a mess.

Isaiah 53 is a great example of the truth of Jesus Christ who became Messiah on our behalf and that he would die, be buried and resurrected. But a lot of Old Testament Jewish scholars did not see that. So they applied this to the nation of Israel going through their hardship – which spiritualizes the verses to make them figurative. This is very dangerous as God was trying to teach a doctrinal truth.

This is the important thing to understand when it comes to the word of God. He is not bound by time – which is very important to understand. God can see things at the past, the future etc. So in Isaiah 53, when the verse says he was wounded for our transgressions, bruised for our iniquities – the verses point to something that has happened in the past. But it’s not a problem, it can still refer to the future prophecy of Jesus because God is not bound by time.

When we look at Revelation 2-3, although he is historically writing to the churches in present tense, it is a doctrinal application to the tribulation. When John says he is in the spirit in the Lord’s Day and knowing that the first five verses of Revelation shows that this book is one of prophecy, although he’s speaking historically to seven local churches, God is thinking in a doctrinal (future) point toward the tribulation.

That’s why when we talk about dispensationalism about general epistles from the book of Hebrews to book of Jude, even if you include Christians that they were writing to Christian churches during that time. These books have a lot of tribulation doctrine.

If God has always interpreted bible verses in this threefold manner since the Old Testament, it is worth keeping this in mind also with New Testament. Otherwise, you are going to come up with the wrong doctrine.